Could you kill Baby Hitler? 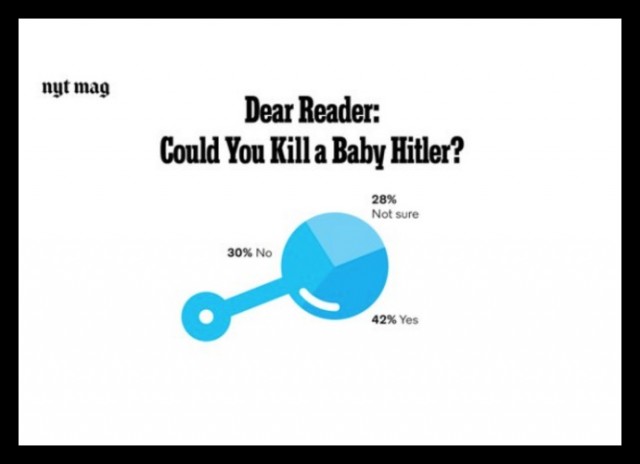 Suppose you were privy to a time machine. Knowing what you know now, would you back to 1889 and kill baby Hitler?

We asked @nytmag readers: If you could go back and kill Hitler as a baby, would you do it? (What's your response?) pic.twitter.com/daatm12NZC

The internet responded exactly as you would expect.

He does have a point.

Sure, kill baby hitler. But what would we do without all of these videos?

If you time-traveled, killed baby Hitler, then returned, you'd be reviled for using the best invention ever to kill an unknown Austrian baby

But are we talking Baby Hitler or Fetus Hitler? #MoralDilemma #DistinctionWithoutADifference

I’m sure Baby Hitler drank plenty of electrolytes too.

We feel your pain.

Nazis. I hate those guys.

Look you probably can't kill Baby Hitler because you need Nazi scientists in order to make a time machine.

at the very least i would definitely unfollow baby hitler

Because that’s not the question?

Why don't they ever ask if you'd *kidnap* Baby Hitler? You've got a time machine. You could drop him off with a caveman family or something.

At least they have delicious cheeses.

However, going back in time to kill Baby Hitler would not be without consequence.

I once had a professor pose the question, “How could a man like Hitler rise to power in a civilized country?”. It wasn’t until years later that I realized the real answer: “With the active, and eager, support of the same type of person that could vote for a Democrat”.

As to the original post, if anyone gets the chance to go back in time to kill the most evil person in world history – don’t waste your time on Hitler. He was a piker. Kill Mohammad. Islam is, and has always been, a far greater evil in the world than Socialism.

If there hadn’t have been a Hitler, we’d still have all of the evils of Socialism. Stalin and Mao were murderers orders of magnitude worse than Hitler. Entire nations are, to this day, suffering under Socialist regimes. Eliminating Hitler would not have prevented any of that.

Aarradin, I wholly agree about getting rid of Mohammad. If there was ever a evil pivital point for history he is it. Actually, cancel the qualitative “If”. He is the single most evil pivotal individual in history.

The Nazi Party and WWII were not one-man creations. The end of WWI set the stage for extremism and another war. If baby Hitler had been killed, someone else would have become a dictator, and WWII would still have happened. The “someone else” would probably have been just as bad. Do you think that every other Nazi would have been a plaster saint, but for the influence of Adolf??

This is especially true if you consider Himmler. Who very well may have been even more ruthless than Hitler.

My, My! That time traveler would certainly be kept quite busy, given all the evil people he, or she, would have to “eliminate!” “Kill” is such a terrible word, so crude and gross, couldn’t we require a more pleasing sounding word, like “prevent” or remove or perhaps abort?

Now, the MSM is going to go bonkers, ape, over something not possible, right now, and our moral elitists will hector us over our terrible choices, thus avoiding dealing with other issues like deficits, national security, protecting our borders, and other such “trivial” issues, or perhaps others like BLM versus All Lives Matter, sometimes.

Thankfully, such real issues can be set aside for now, what a relief. Thanks much Kim! 😉

IF you could go back in time with perfect knowledge, there’d never be any need to kill any baby.

You could simply nurture, and assure that the baby was not exposed to the same twisted ideologies that Hitler…and lots of others…were exposed to, including from Wilsonian America.

If you know who to track on twitter you can see this happening real time and join in for fun.

This is exactly the template Michelle Malkin used when she started Twitchy.com which is a hoot.

The question itself was devised by the race baiting New York Times no doubt to stir racism against Jews as this latest aggression against Israel is being shipped up by Socialist’s here and abroad.

I would kidnap baby Hitler, go further back in time and kidnap baby mohammed, then let a nice Jewish family adopt them both.

God complex. Not only would the baby be aborted, but if he was born in a progressive liberal society, and other societies with a State-established pro-choice cult, he would also be tortured, harvested, and cannibalized for money and longevity.

Because Hitler was the sole cause of WWII, right?

See what a total lack of knowledge of history does? It makes you kill babies.

One word comes to mind from this!

Ah, hindsight! It feeds the conceit that with the perfect knowledge after an event, there is some cause that we could have altered and hence altered positively the event outcome.

There are many now who insist that we can now evaluate others among us and reliably predict which of us in the future will behave aberrantly so that we can implement changes to affect positively undesirable outcomes. That also does not work.

It would be more beneficial to travel back into time and kill LBJ and BHO. They have caused more damage to the USA than Hitler did.

Because the USA is all that matters, right?

Where are all the others who were complicit in the 60-100 million murders in the mid 20th century?

Answer: the same place as the American’s who spit on our soldiers when they returned from Vietnam.

I’m not afraid of Hitler, Stalin, Obama, or Hillary. I’m afraid of an electorate that puts these people into power. They are the same electorate who will put you in an oven and say it was just their job.