Another GOP Debate Airs Next Wednesday. Here’s the Lineup!

Another GOP Debate Airs Next Wednesday. Here’s the Lineup! 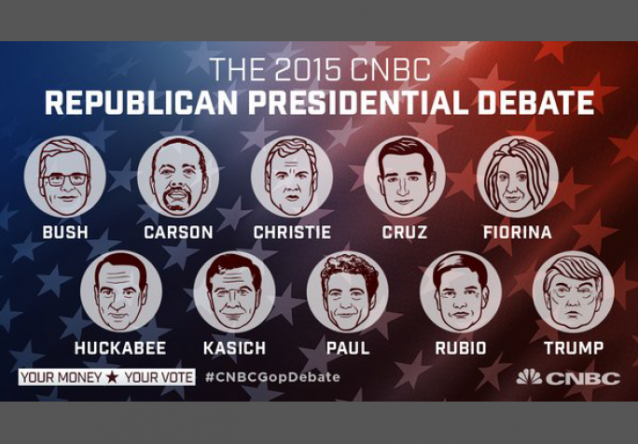 CNBC has released the final lineup for next week’s GOP debate in Boulder, Colorado—and there are absolutely no surprises to be had.

The top tier is missing Scott Walker, who appeared in last month’s CNN debate but has since withdrawn from the race. Bobby Jindal, Rick Santorum, George Pataki, and Lindsey Graham will hold down their usual places in the pre-primetime debate. Jim Gilmore did not qualify for either debate.

CNBC’s John Harwood has the details:

Larry Kudlow went into detail today on how he thinks it will be important for each candidate (especially John Kasich, who you don’t hear about very much and who Kudlow thinks “needs a good debate”) to message on economic growth:

According to The Hill, CNBC used “an average of qualifying polls from the major broadcast networks and Bloomberg from Sept. 17 through Oct. 21” to decide who would make the main stage, who would participate in the early debate, and who would be livetweeting from home.

Rand Paul and Chris Christie should be worried, at least by CNBC’s standards; they both came dangerously close to the 2.5% polling line of demarcation separating the lower tier candidates from the main stage.

As far as expectations are concerned, I have to agree with Kudlow—I’m ready for real policy messaging. We got closer to it in the last debate, but at this point, the candidates—especially those taking up space on the main stage—have no excuse to substitute snark for substance.

That’s not to say I don’t expect a show. We’ll be covering the whole thing live, so be sure to tune in here next Wednesday!

Amy Miller said: “As far as expectations are concerned, I have to agree with Kudlow—I’m ready for real policy messaging. We got closer to it in the last debate, but at this point, the candidates—especially those taking up space on the main stage—have no excuse to substitute snark for substance.”

The last debate was a liberal media pillow-fluffer for Hillary. Just sayin’

Who came up with that hipster graphic?

Those portraits look like something straight from the old Microsoft Clip-Art Library that was recently declared public domain.

Actually, you know what they look like? The pictures on the Guess Who? game board.

They could get rid of Kasich, Christie, Paul and Huckabee and there would be more time for the serious candidates.

They won’t because keeping the GOP candidates in a cacophony of backbiting is the best way NBC has of muting them on policy.

I for one can’t stand Huckabee, but he observed the other day his current standing is about where he was in 2007 before he pulled off his Iowa upset.

The large field helps prevent anyone from breaking out to challenge the media’s preferred narrative for the nomination campaign.

The next debate should have a 5% cutoff.

They could add a pre-pre-primetime debate and Jim Gilmore could have it all to himself.

no way i’m bothering with this exercise in boredom.

Wow, those caricature portraits are bad. Two, maybe three, are identifiable if you didn’t know these were supposed to be the candidates. But Fiorina? Looks like a random lady who just got out of the shower. Christie? On first glance, you might think it was George W. Bush in a bad mood. Sheesh.

They still have to include the “Rino,” element to satisfy the Repub. Elitists. Maybe if we could get rid of the ” Deadheads,” we could ask so policy questions, instead of ” Back biting,” ones. Once again the Repubs. are in enemy territory. Stupid to subject Candidates to abuse.