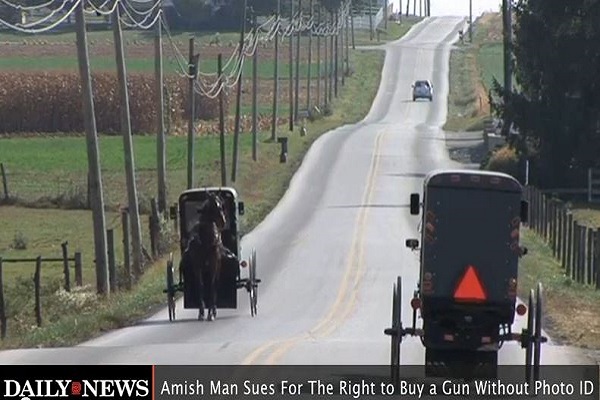 As Obama stumps for gun control in Chicago, an interesting case has been filed in an effort to protect both religious liberty and the Second Amendment.  An Amish man from Pennsylvania attempted to purchase a gun via legal channels and was denied because he did not have a photo id, and he did not have that photo id because of his religious beliefs.

The Amish in Lancaster Country believe that a photograph of themselves is the equivalent of a disallowed “graven image” and thus refuse to allow themselves to be photographed.  This is a religious exemption/exception that has been readily acknowledged and accepted by state and local government who have issued photoless ids and drivers’ licenses to Amish people.

In a suit that brings together the Second Amendment and the Religious Freedom Restoration Act (RFRA), an Amish man filed a federal lawsuit in Pennsylvania last week because he wants to buy a gun without the required photo ID — and because getting that photo ID would violate his religious beliefs.

Andrew Hertzler, according to the suit, is from Lancaster County, Pa., and is an “active and practicing” member of the community; his “parents, grandparents, and siblings are all active and practicing Amish”; and he “has a sincerely held religious belief that prevents him from knowingly and willingly having his photograph taken and stored.”

“The Amish faith prohibits an individual from having his/her photograph taken,” the suit read. “This belief stems from the Biblical passage Exodus 20:4, which mandates that ‘You shall not make unto thee any graven image, or any likeness of anything that is in heaven above, or that is in the earth beneath, or that is in the water under the earth,’ as well as the Christian belief in humility.”

But Hertzler’s humility caused a problem when, in June, he tried to buy a gun from a Pennsylvania dealer “using a non-photo, state-issued identification.” This wasn’t enough, according to the dealer — Hertzler was told he needed a picture ID.

a complaint against the United States and numerous other individuals in the United States District Court, Middle District of Pennsylvania on behalf of Mr. Hertzler, an Amish man, who is being denied his “core right” to purchase and possess a handgun for purposes of self-defense in his home, because federal law requires that he produce identification, bearing a photograph, which violates his core religious beliefs.

Specifically, 18 U.S.C. § 922(t)(1)(c) requires that a Federal Firearms Licensee only transfer a firearm to an individual who produces “a valid identification document (as defined in section 1028(d) of this title) of the transferee containing a photograph of the transferee.” As Mr. Hertzler’s sincerely held religious beliefs preclude him from knowingly and willingly having his photograph taken, Mr. Hertzler is unable to meet the requirements of Section 922(t); thereby, requiring him to either forego his constitutional right to keep and bear arms in defense of himself and his home or violate his religious tenants.

Even Pennsylvania law acknowledges Mr. Hertzler’s religious beliefs and provides for non-photo ID and drivers licenses and for the ability of an individual to purchase a firearm with non-photo ID, pursuant to 18 Pa.C.S. § 6111(b)(2). However, federal law fails to include such an exception, in violation of the Second Amendment and the Religious Freedom Restoration Act.

This will be an interesting case to follow for many reasons, not the least of which are the parallels to the contested regulations stemming from ObamaCare that demand that citizens violate their religious beliefs in order to meet the requirements of executive mandates and regulations.

The recurring tension amongst individual liberty, inherent and inalienable rights, religious freedom, and the federal government’s ability to override and undermine each seems a growing cause for concern in recent years.

…how ’bout a nice pencil sketch?

A solution that should soon be readily available: thumb or finger print ID.

The technology is there – and it should be something that will clear all legal hurdles (i.e. the “it’s raaaacist to produce a picture ID”) because it doesn’t include a picture at all, just a print.

I know, I know. These clowns will say it’s still “Jim Crow” blah blah blah. But as this shows, the rights of many, including the Amish, are irrelevant to the dictatorial powers-that-be in this regime.

Not relevant. It is still a “graven image” according to their beliefs. Besides, you should not give the tyrant fascists any help in their efforts to turn this country into a oligarchy. That includes suggestions.

If one must apply for permission from the state to exercise a natural right, it ceases to be a right. The BATFE by it’s mere existence, is a violation of the second amendment.

Self-defense is a privilege.

I wonder if criminals provide a photo i.d. for gun purchases.

No, it’s not. It’s inherent, given by nature’s god (in the vernacular of the time).

Sarcasm. Of course self-defense is an unalienable human and, in America, civil right.

endowed by their Creator with certain unalienable Rights, that among these are Life, Liberty and the pursuit of Happiness

That’s been my argument against the Firearm Owner’s ID card in Illinois. That whole system is inherently racist, since black people don’t know how to get an ID to begin with.

There are also no gun stores in Chicago: Further evidence of liberal racism. Maybe we need something like Planned Armament, providing low-cost weapons legally to poor blacks, since all the racist gun stores are way out in the suburbs.

I have nothing against the Amish and I think if Hertzler can prove his identity in another legitimate way, he should be able to purchase a gun.

However, I think a court ruling in his favor would set a horrible precedent. You know what would follow: Muslimahs purchasing guns while wearing a burka.

Which is it? Do you think he should be able to purchase a gun, or do you think a court ruling is a terrible idea?

Like it or not, it’s going to take a court ruling (or an Act of Congress, which isn’t likely) to convince the fed.gov to change this rule. The court ruling could be narrowly-written enough to provide an exemption only for groups traditionally issued a photo-less ID, which would rule out your “Muslimahs” who are photographed, burka or no.

If the Muslim in a burkha is an American citizen exercising rights granted by the Constitution, what’s the problem?

When presented a choice to, either deal with freedom and its attendant consequences and responsibilities, or, accept additional governmental oversight and restriction no matter how minor — you choose freedom. If we actually did that in this country, we wouldn’t have crap like Congress passing bad budget deals at 3am.

I live in the Amish country of northern Ohio and I know for a fact that these guys hunt like fiends. Where did they get all those guns without photo IDs? I really don’t know but there are other state-issued photo IDs that are not drivers licenses. I got one when I was 11 so I could fly.

It’s not a burden to get a photo ID, whether it’s for a gun or to vote.

It’s not a burden until the requirements violate rights or beliefs you hold dear. Just because you’re OK with it doesn’t mean everyone is.

As I recall, Ohio Amish and Lancaster Amish have subtly different beliefs. It’s possible the Ohio Amish will allow their pictures to be taken, or they’ve opted to allow a very narrow exception to the religious prohibition for official purposes.

Jesus did, after all, command his followers to obey the laws of the lands they enter except where man’s laws conflict with God’s Law. Ohio Amish may be interpreting this differently from Lancaster Amish, or they may simply be purchasing firearms in private transactions (no photo ID required).

But none of that should render this lawsuit meritless. The fact is, federal regulations do require the Lancaster Amish to relinquish either their First or Second Amendment rights. They are mutually exclusive under the current rules.

Amish families across the street from each other will follow different practices, depending on what the bishop of their church will allow them to do.

What if an Amish man is arrested for any number of reasons (domestic abuse, public intoxication, assault) – they are humans after all and all fall short of the glory of God. When being booked by the police should their mug shot not be taken because it violates their beliefs?

If they can make an exception for Muslim women being photographed in hijabs for official IDs, then they can accommodate the Amish in this regard.

It’s all a matter of the public will and a bit of creativity.

An Amish neighbor told me he had a gun for sale if I was interested. It was a single-shot revolver made of wood.

I need to interject a couple of facts into the conversation.

The photo requirement is new. Until Feb/March 2011, for instance, the Illinois state police issued FOIDs without photos to the Amish. Then a bureaucrat changed the rule.

Also, the Amish don’t buy guns for self-defense. They believe in non-resistance to violence. They’re sometimes called pacifists, but they reject the term as it doesn’t fully capture their rejection of coercion in all its forms, not just violence.

They will not bear arms against another human being. They also won’t sue another person to get a financial judgement, as that judgement will be enforced using the coercive power of the state. That violates their belief that a true Christian turns the other cheeck. They can’t seek public office, and will be excommunicated for doing so, as then they’d be in a position of authority over the coercive power of the state.

They only use guns for hunting and controlling vermin on their farms. That’s never been an issue until the Obama presidency. The status quo from the founding of this country until January 2009 was they never needed photo ID to buy their rabbit guns.

Consider them the canaries in the coal mine.

I think that it is long past time that the Amish & Islamists start following the ” Rule of Law,” in this Country or leave. This includes getting those Buggies off the roads. Muslims like the Amish should obey the Laws of the Country. Basic ways to identify people is not oppresive Gov. If all paid into the Insurance Industry, the cost for all would be less. Our ” Open Border,” works both ways.

I’m not sure you understand a lot of what you just wrote, but whatever.

If there really is a gun show loop hole then if he really wants a gun he can get one. This is a political stunt. There are thousands of guns available from private sales, no photo required.