Why it takes more than the media to grasp the world

Why it takes more than the media to grasp the world

“You only show a small part of the world, and call it “the world.”” 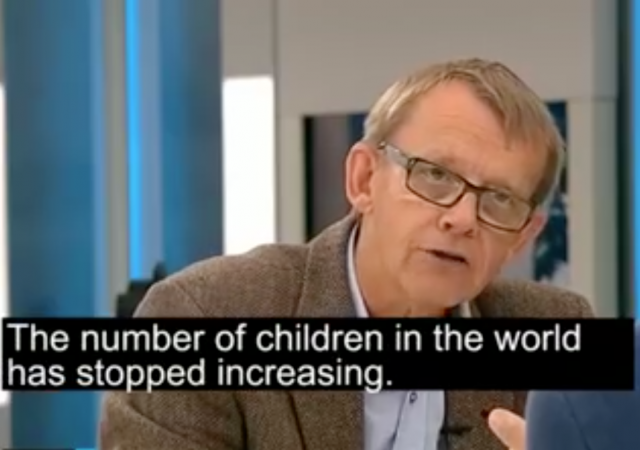 Hans Rosling from Gapminder explains why the media cannot and does not provide us with an accurate understanding of what’s happening globally.

The idea seems a bit obvious, but how often is it actually articulated? If it’s not doom, gloom, scandal, or a puppy doing something cute, it doesn’t make the nightly news cut. The resultant product leaves the casual viewer with a skewed view on the state of global affairs.

You need more than the media to grasp the world

You need more than the media to grasp the world

Posted by Gapminder on Friday, September 4, 2015

The reporter asserts that the media reports on the state of the world as it is, that there is, “war, conflict, chaos.” Rosling immediately objects to this notion:

“That was wrong, you are wrong, straight up wrong!” he says. “There was a fantastic election in Nigeria. A democratic election in the largest nation in Africa, where a semi-capable government was replaced by a very competent leader now. Muhammadu, the new one, got support from the entire population. The fantastic election in Indonesia last year. The progress in India. Yesterday, India was declared free from tetanus.”

The reporter fires back that Nigeria is entrenched in war against Boko Haram.

“Yes, that is in a small part of Nigeria, not the rest. Nigeria has fast economic growth and falling child mortality.

You only show a small part of the world, and call it “the world.”

The big difference, that girls go to school, that children are vaccinated, that most people have electricity at home. That people are capable and professionals around the world. That is important to show but happens so slowly.

It’s important to read (but not necessarily believe) the press from multiple countries.
I’ve found some of the content on France 24 to be very useful. Beyond that, you often have to read the British media to find out what is going on in the US (now that is really scary). Countries like China, Australia, even some of the Pravda and Socialists outlets (just to find out what they think is important) are useful.

Drudge continues to irritate the world through his highlighting stories the msm often wishes to ignore. Plus, The DailyMail Online is a reasonable source of news, blogs like LI, Powerline, Insta, and others are often good resources, highlighting what is often ignored elsewhere.

Rosling is correct in his observations yet the situation is far from hopeless.

Still, our msm like to influence US as they select what they wish US to know. God less them for their small mindness, in the face of the presence of the internet, they can hide the truth but it is found regardless.

It is only by the habit of decades of TV that we still think of it as ‘news’ programs. The network and cable TV news divisions have long since become entertainment venues that also report the news, sort of. A half hour or one hour long news program can only cover so much and their primary concern is ratings, not journalistic integrity. A Bill O’Reilly and his producers or a Rachel Maddow and her producers make decisions on what to cover and what to ignore. These hosts have a certain power over content, as do their producers, who are more in thrall to the overall network. But know this – they share one common goal… ratings. A list of stories ranked by importance is not the way to top ratings because stories on taxes, budgets, etc., are boring. They need and want pop and sizzle, the LCD pathway to higher ratings, becauser without them you aren’t on the air very long.

This is not a rant against a negative influence of capitalism on news media. We have an example of a TV news division that does not rely on revenues from commercial ads, the price of which are set by your ratings, and are funded instead by corporate grants, tax money, and donations from viewers. That would be PBS and NPR and no thank you.

I say just keep rockin’ on the porch, sip yer tea or shine, keep yer shotgun handy, and t’ hell with what’s going on out in ‘the world’. By choice and design, my world is this here holler and the river whut runs through it.

Pretty nice here in my little corner of Northern Idaho, too. Cheers!

Henry, don’t forget to put back some pickled possum parts.

The media, some charities and some governments want to tell you how bad it is so they can relieve your wallet of it’s contents.

The news is most often dystopian: murder, shootings, larceny, and political corruption, constant allusions to global warming, CALIFORNIA, hurricanes, etc. all with a human interest story fitted in to lighten the mood and so the anchors can ooh and aah and chuckle a bit.

The visual media is rife with dystopia. Movies, to name just a few: “The Day After Tomorrow”; “The Day the Earth Stood Still”; Independence Day”; superhero movies that call upon superhumans or mutants to be the saviors of the world under attack.

Politics feeds on dystopia. Dystopia gives politics a raison d’etre without which there can be no transfer of money and power. And so go the political commentaries on most news broadcast.

The fact that there is so much information many people, I would believe, just glance at the horrific headlines on their e-device and come away thinking that the world is one hell of a place-“red in tooth and claw”-and so they had better either stop global warming-famine-refugeeism-unfairness-mass destruction, etc. now or drift off to Lah Lah land with drugs.

We are no longer a logo centric nation. Instead, people now focus on snippets of twittering and think they understand, not with reason but with feelings, what is happening in the world.

I don’t believe that there is much in-depth study or critical thinking going on in our nation’s culture as there was during its founding. We as a people have become, despite what atheists and agnostics posit, a nation of emo rather than of reason and spiritual insight and intuition. We suffer from a lack of wisdom and commonsense, derivatives of logo centrism.

We would certainly learn more about ourselves and others and the world if we read more widely (including the Scriptures) instead of, as one example, going to therapists to do a Freudian number on our parents.