Visit Munich Oktoberfest, while you still can

Visit Munich Oktoberfest, while you still can 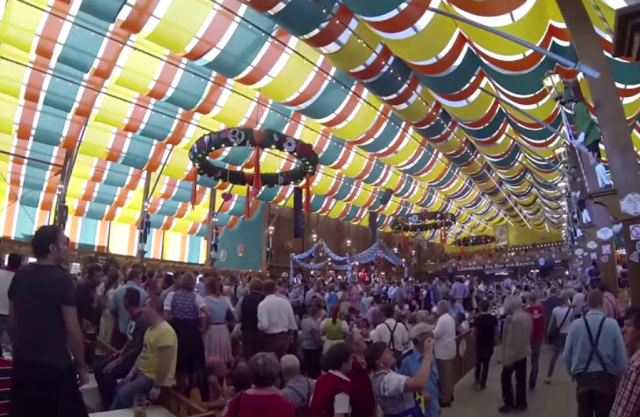 German authorities have been constantly revising their official estimates and have now concluded that by the end of 2015 over a million migrants would be settling in the country. What mass-migration would mean for Germany and Europe in the long run remains to be seen, but media and activist are already asking locals to adjust to the change.

The first casualty appears to be the Munich’s traditional Oktoberfest, 16-day annual folk-fest held every year in September. With just less than a week to go, there are calls to cancel the Oktoberfest. Germany’s leading business daily Handelsblatt ran an article titled “Boycott Oktoberfest.”

Technology reporter Britta Weddeling lamented the fact that government was not doing enough and “the refugees [were] not invited [to the event].” She made a blunt call, urging readers that, “If you’d travel to Munich to celebrate Bavarian cosiness and hospitality, you’d support a lie. Don’t go. Boycott Oktoberfest.”

If Frau Weddeling is not happy with the fact that refugees, predominantly Muslim, are not being given free entry the beer tents in Munich, some devout Muslims are petitioning to call for a ban on “Intolerant and Anti-Islamic Event of Oktoberfest” altogether.

The petitioner Morad Almuradi from the Netherlands complains in his online petition:

Oktoberfest is an Intolerant and Anti-Islamic event. We tried to ignore the event, but there too many Un-Islamic acts done at the Oktoberfest. Such as alcohol consumption, public nudity etc. (…) We also believe that the Oktoberfest might also offend all the Muslim refugees coming from Syria, Iraq, Afghanistan. The cancellation of the Oktoberfest event will help refugees not to forget their Islamic history.

It is impossible to verify the authenticity of the Almuradi’s petition that got around 500 signatures before it was closed, but this would not be the first time radical Muslims in Germany would be seeking to impose their idea of culture on locals. Last year, media reported of nightly patrols in the city of Wuppertal by ‘uniformed’ radical Islamists imposing Sharia compliance on the streets.

Liberals incensed by the idea that revellers aren’t willing to stay away from the Oktoberfest and won’t vacate their beer tents for the migrants, just gloss over the fact that Saudi Arabia isn’t allowing any Syrian refugees near its mega city with 100,000 empty, air-conditioned tents enough to house 3 million of their fellow displaced Arabs.

Meanwhile, please visit Oktoberfest. While you still can.

Just a little FYI: The “End Oktoberfest” petition was a joke created and supported by the internet trolls over at /pol/ on 4chan just to see how many people would see it and run it as legitimate.

The petition may be a joke, but the attitude of entitlement by the “refugees” and illegal aliens is very real. We’ve seen it here in the U.S. for decades.

No argument there. But the petition was very clearly started by a German poster (or someone running a German proxy) in an effort to generate extra controversy “for the lulz”.

Dan Rather, call your office ASAP.

It takes some damn nerve to go live in somebody else’s country, take their money and resources, and then demand that they change their culture and traditions to conform to your beliefs. But that seems to be the way of too many “refugees” and “migrants” and illegal aliens.

That’s the nature of Islam and Muslims. They believe that they are superior to everyone else and that Islam trumps both Judaism and Christianity (forget about the Hindus and Buddhists). Therefore, according to their ideology which tells them to give you the opportunity to convert or die, they have a right to demand that you change your culture to theirs cuz theirs is superior. It doesn’t matter that they are guests in your country. If you reject their demand to eschew your culture for theirs, they have the right to kill you.

Some folks may say I’m bigoted, but I don’t care. For years, since before 9/11, I’ve been noticing that the common thing in hotspots around the world is Islam. That where Muslims are one will have murder of the mass variety, if they can achieve that. I began paying attention to Islam and what it teaches. At first, I was an outlier, speaking facts that few (like Spencer) were addressing head on. I’ve lived to see that I’m average wrt to what I think and say about Islam. Not because Americans are bigoted, but because more people realize that Islam and Muslims are barbaric and barbarians who will do anything to achieve an objective.

Germany’s folly was in opening the gates to let the barbarians in. Oh, Germany, you killed your innocent Jews and have invited in the people who will kill you. God’s judgment has come to Germany, finally. Hopefully, the European Jews are finding their way to Israel.

In Texas, we celebrate Oktoberfest in many places.

….and drink alcoholic beverages and eat sausages made from pork!!! 😉

Wow. Wish I could fly over and spend the whole time there!!

This is more evidence that this is an INVASION, not “refugees” seeking asylum, or “migrants” seeking a better life.

Germany, once the most hideously nationalistic and racist nation, may have just destroyed themselves (the most prosperous nation in Europe)……..all because of PC.

Whom God would destroy He first makes mad. Germany had a chance to repent of her great sin. Instead, she turned away from God. Her churches are empty, her people disdain the preaching of His Word. Now, she has invited the barbarians to enter her gates.

That petition is so transparently Orwellian.

In Muslimspeak, being “intolerant” means doing anything that Muslims don’t tolerate.

In Muslimthink, infidels must abandon their own traditions in their own lands so that Muslims who choose to migrate there will not forget their Islamic history.

If such a clear expression of the Islamic notion of “tolerance” doesn’t wake up the German authorities and multiculti do-gooders, perhaps nothing will.

The Germans were dumbstruck by calls for their assimilation.

Muslims don’t like public alcohol consumption at a cultural festival? TOUGH SHIT! It’s not your culture, so don’t go!

Muslims are like enviro-nazis, vegan-nazis, credo-nazis, and all those other assorted totalitarians. If they don’t like something, you are not allowed to do it. It doesn’t matter if they don’t see you doing it. You are still not allowed to do it, and they will exact a heavy penalty if you do it. All these totalitarians are the same. DO WHAT I SAY.

….to say nothing about those pork brats they eat along with the beer!

That’s not the wurst of it.

Multiculturalism, the ideology of equalization, will level everything in German culture (and U.S. culture, for that matter)to the ground. History will no longer have any meaning or value.

It’s not multiculturalism, Jennifer. It’s ISLAM. When Islam moves in, it eradicates the history and culture of The Other in order to prove its superiority. Therefore, as far as Muslims are concerned, all that existed before the 7th C must be destroyed—how they will explain Mohammed’s genesis then, nobody knows, likely as the seed of a bat out of hell. Look at what they are doing in Israel, Afghanistan, Iraq, etc.

It’s not merely Islam, but left-wing ideology. Notice that progressive liberal societies torture, dismember, and decapitate more [wholly innocent] human beings than does the Islamic state over the same period. Revelation of sacrificial rites (e.g. pro-choice/selective-child) must have been a teachable moment for the Muslim extremists.

Muslims didn’t need to look at abortion mills to know how to kill. All they had to do is read the Koran which told them they have a DUTY to kill. The barbarity of the Islamic world is unparalleled. It took Tojo to infect the Japanese military with vicious ideas to turn that country’s military into monsters. That sort of infection was not learnt in Japanese places of worship and so the Japanese could find a better way. The infection is Itge slamic Koran and teachings. The only thing that can change Muslims’ Hitlerian will to power and to kill is conversion to the true God. Falling that, you’ve got to kill them because at some point even the “peaceful moderate majority” of Muslims will follow the Koran and kill.

Hahahahahahs, there is absolutely NO chance of Oktoberfest EVER being cancelled 🙂

Just curious, was big Mo’s mother a muslim? Or is he a half-breed?

Was Mohammed a Muslim? Likely a black stone worshipping pagan.

The big question that some Christians stumble over is: what is Jesus? It shocks many to be told this: a Jew.

People should study the history of Islam. Muhammad led his followers in wars of aggression. In one case attacking a peaceful Jewish village so he expell the inhabitants and give their property to his followers. Islam was born as a religion of war and has always been so. Mohammed ordered his followers to spread the faith thru the sword of conquest and his true followers have obeyed this command for over a thousand years. Those that claim that Islam is a religion of peac are lying. The peace only comes when Islam reigns supreme over the whole world. It is the terrorists who are the true followers of Islam. The “peaceful” Muslims are apostates. Islam is identical to Nazism and Communism in every significant respect and they should all be treated with equal disdain.