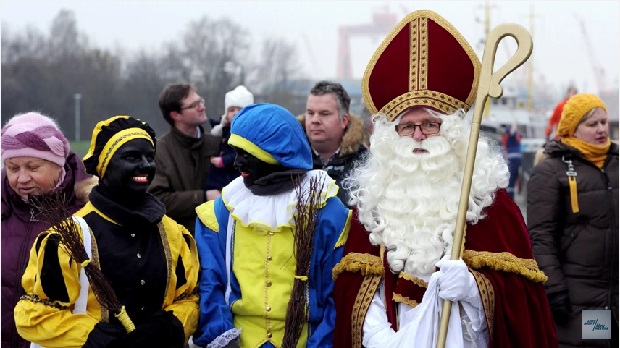 The United Nations has declared a war on racism and slavery.

Not on real slavery, as practiced by Saudi Arabia and Qatar with an immigrant labour force, but as practiced by the people of Netherlands during their Christmas festivities.  The U.N.’s self-proclaimed “Committee on the Elimination of Racial Discrimination” told the Netherlands to end its “Black Pete” Christmas tradition, in which Dutch people wear blackfaces, calling it a “reminder of slavery.”

The actor portraying “Zwarte Piet”, as the jovial companion of Santa Claus is called in Dutch, usually puts on blackface make-up along with a fancy hat and Renaissance attire. (As the Dutch folklore goes, Santa’s companion is a Moor from Spain.)

But the crusaders against racial discrimination at U.N. are not having any of it. According to the New York Times:

A United Nations committee has urged the Netherlands to get rid of Black Pete, a popular children’s character who has long been portrayed in early winter by white people in blackface makeup, usually with exaggerated red lips and gold hoops in his ears.

The United Nations Committee on the Elimination of Racial Discrimination wrote in a report issued Friday that “the character of Black Pete is sometimes portrayed in a manner that reflects negative stereotypes of people of African descent and is experienced by many people of African descent as a vestige of slavery.” It urged the Netherlands to “actively promote the elimination” of the racial stereotyping.

The Netherlands, a pioneer of today’s free market capitalism and individual liberty, stands accused of racism by a body comprised of medieval theocratic regimes and third-world dictatorships.

The Dutch government has dismissed the allegations levelled by the U.N., saying it is not the government’s job to rewrite folklores. Prime Minister Mark Rutte told reporters, “What Christmas songs you should sing, how you celebrate Christmas and Easter — this isn’t what politics is about.”

Last November, Christmas celebrations in the country were met with protests led by activists. More than 90 demonstrators were arrested after they clashed with locals, carrying “Black Pete is racism” placards at a Christmas procession in the city of Gouda.

Schools and businesses are already caving in to the mounting activism, many changing the traditional Christmas character to colours ranging from orange to even golden.

I just love the cognitive dissonance when cultural relativists go on tirades about the evils of (some) other cultures.

Jeebus! Othello was a Moor and an honored general in Medieval Christian Italy.

The UN is a DANGEROUS body.

If we pull out of the U.N., we lose our all-important Veto power.

I was more abbreviated than I should have been.

Especially WRT our MONEY. But we keep our veto.

I’m glad the UN suddenly cares about the dignity of and respect for black people. Can these please stop raping little black children, everywhere they go, now? Because that would be nice. Wouldn’t that be nice? I think that would be nice.

As Donald are ump would say, “bing, bing, bing…”

I think that would be nice, too.

Santa tradition is quite obviously older than Renaissance. The Indo-European folkloric character now known as Santa is derived from a pre-Christian diabolical creature, hence blackened face, horns (as in Krampus) etc.
You think the PC types would like paganism, but apparently not when it’s interesting.

Holland now has so many black immigrants there’s no need to have whites in black face. Hire some blacks and have them put on black face.

Santa is NOT very happy! No wind farm in your stocking this Christmas for the UN bullies. In fact, Santa wants to see you at the North Pole-right now!

I suppose lumps of coal are out of the question…

We both know that if Santa openly used fossil fuel during “season’s greeting time” he’d be labeled “a climate-denier-sexist-white-coal-privileged-Tea Party Extremist”…just like the rest of us.

Between you and me, Rags, Santa uses coal and he sees everything sHillary has been doing. She will get her lumps…of coal?

“He sees what you’ve been doing; [and, ewww]

He knows when you’re a fake;

He knows when you’ve are bad or good,

So confess, for goodness sake!”

And where the HELL is Hawkins these days?

I’ve been wondering the same thing.

Do you think Henry is Santa Claus and/or needs a lawyer?

Well, I hope he doesn’t need a lawyer more than usual.

It’s just about the UN’s speed to crack down on the Dutch.

Right now I bet there must be thousands of Yazidi sex slaves who would love to trade their current lives for the chance to put on blackface, pretend to be a guy, and take part in holiday tradition that belongs to a religion not their own. In a land far away.

It isn’t like the UN is going to crack down on the Yazidi sex slave trade, though, is it?

It’s just so much easier and safer to target the Dutch.

I would have said the same thing about Yazidi men who were captured by ISIS. But they’re dead.

And the UN is going after the Dutch.

Good on the Dutch government for telling the UN to pound sand.

Of course this is related to slavery – I mean, after all, it was Dutchman who founded South Africa who became Boers – but the tradition in Holland has been modified so that it doesn’t carry that connotation. Zwarte Piet is no longer a slave and hasn’t been for a long time. he’s not even officially black, but black now from chimneys.

Blackface was used because there very few real blacks in Holland till around 1975, when over 100,000 people in Surinam fled to the Netherlands, well over 40% of the population, upon hearing that Surinam [Dutch Guiana in South America] was about to become independent.

And they also would lose the right to go, so they couldn’t wait to see if it became a dictatorship, but had to go now.

I don’t know if there was also a loss of government benefits, but they were quite right to flee for political reasons. Just read the history of most countries after independence. It turned out to be true also in Surinam.

Here is an artivle about Black Pete by someone whos against it:

I don’t have the number of people who fled upon the approachh of independence, but I think it was in the hundreds of thousands. 100,000 is too low.

By the way, there was no apparent effect upon unemployment in the Netherlands. the only chanmges were sociological.

Newfoundland voted againt independence in 1949 – quite sensibly. and they had less experience to go on.

Of course, the U.N. and others are only interested in what happens in Europe, so no reference to real slavery in Mauritania or anywhere else.

You typed that in a cynical tone, Amy. That in itself is racist donchaknow.

Boy, this is joyless nonsense. It doesn’t matter how many blacks or how many whites a society has. Some guy wants to be Black Piet, let him. So what if he has to put on make up? Folks never heard of the suspension of disbelief? It’s part of theatre. Some guy dresses in white face, so what? Black Piet is part of the Nederlands Christmas pageant; let who wants to be Black Puet be Black Piet cuz it’s not about Piet’s race; it is about the heart that is open to the Christ child.

As for the associated page try, I t’s gotta be as Shakespeare said, “think when we talk of horses that you see them printing their proud hooves into the receiving earth; for it is your thought that must deck our kings”.

Well years ago when I came to Sweden, there were these small tasty spherical chocolate donuts that were introduced to me. They are named for their color and their shape. Having nothing at all to do with race does not stop the insane protest over negerbollar. The UN hasn’t stepped in yet but some bakers have bowed to the incessant PC goon squads. 🙂