Today, the State of Texas Stands With Law Enforcement Officers

Today, the State of Texas Stands With Law Enforcement Officers 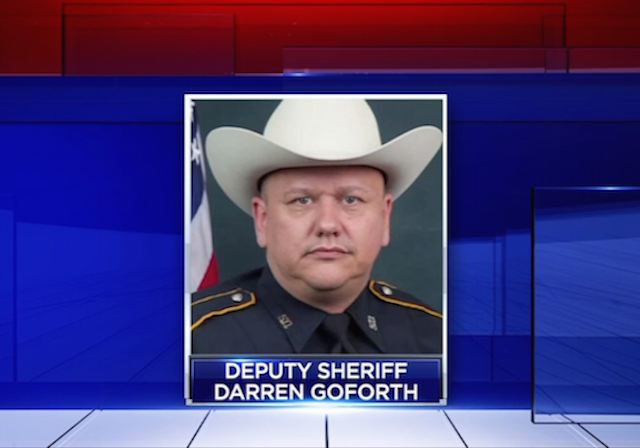 The state-wide show of support will take place beginning at 11:00 AM CST.

As Texas continues to mourn the loss of Harris County Sheriff Deputy Darren Goforth, Governor Greg Abbott today issued a statewide call to stand with law enforcement in Texas. To honor Deputy Goforth and all officers across the state, Governor Abbott is asking Texas law enforcement officers turn on their red and blue flashing lights for one-minute at 11:00 a.m. this Friday – the time Deputy Goforth’s funeral is set to begin.

“Respect and pride in our law enforcement must be restored in this state and nation,” said Governor Abbott. “It is time to unite in solidarity to support the men and women who serve and protect our communities. I ask that communities across Texas support this cause for unity and remember the essential role that law enforcement plays in keeping Texas safe and strong.”

Additionally, law enforcement patrol cars will line the North drive of the Capitol on Friday to join in unity in turning on their red and blue flashing lights.

Here in Houston, folks are encouraged to wear blue as a sign of support for Deputy Goforth:

Started by a fellow deputy, #BlueHouston is, “a way for the community to share supportive thoughts and prayers for Goforth’s family and for the many people in law enforcement who are shaken and grieving,” reports KHOU.

The #BlueHouston has tag is already full of tweets and photos of communities, businesses, residences, school districts, and towns state-wide who are expressing their gratitude to the law enforcement community:

Please wear blue on Friday to support our law enforcement officers who risk their lives every day to keep us safe. #BlueHouston

The City came together in a big way to show all law enforcement officers that #wevegotyoursix! #bluehouston pic.twitter.com/dFDS17bXxp

Ranch,
Wear blue tomorrow to show support for our law enforcement officers and to honor the life of Officer Darren Goforth. #BlueHouston

Blue ribbons tied around trees in the neighborhood where Deputy Darren Goforth will be honored #KHOU #BlueHouston pic.twitter.com/TxtPrE516u

If your school/work dress code allows it, please wear blue on Friday to support our brave law enforcement officers. #BlueHouston

We support our boys in blue! #BlueHouston #houston @KPRC2 pic.twitter.com/93oKdE5B72

I support our police. #bluehouston

Is cool to see communities come together in unity when a loved one is taken rather than riot for all the wrong reasons. #BlueHouston

There’s a move afoot to rename West Ave. (where Goforth was shot) after the deputy.

Seems a fitting tribute, along with a reminder.

Allen, 27, was found dead in his Clyde home Monday in what investigators are calling a homicide.