The View is Losing Advertisers and They Deserve It

The View is Losing Advertisers and They Deserve It 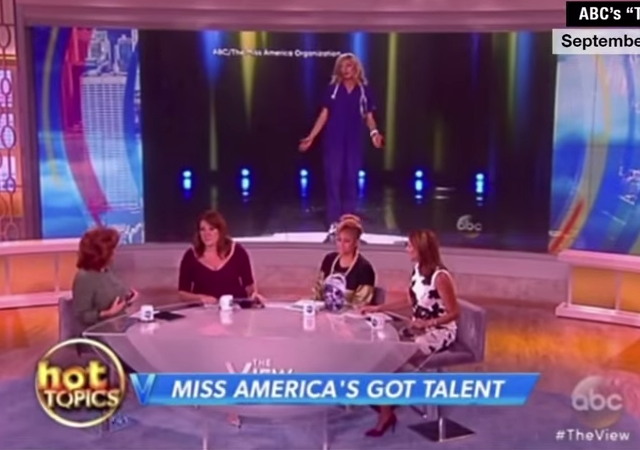 After the recent Miss America contest, some of the ladies on The View mocked Miss Colorado, who is a nurse, for wearing scrubs and a stethoscope during the pageant.

Social media erupted following their obnoxious comments and now the show is paying the price with the loss of advertisers.

The fallout continues over comments two hosts made on The View, about Miss Colorado’s Miss America monologue about being a nurse.

Johnson & Johnson and Eggland’s Best Eggs have both announced they will no longer advertise on show following the comments.

Johnson & Johnson said Thursday the company was taking the money saved from pulling ads from “a certain daytime program to good use,” and announced a new donation drive for nursing scholarships.

Likewise, Eggland’s Best said Thursday that the company “appreciates nurses and values the important role they play in family health. In light of the comments about the nursing profession recently made on daytime television, we will no longer be advertising on the show in question.”

Joy Behar and Michelle Collins came under fire for comments the two made on Monday about Miss Colorado Kelley Johnson’s monologue, in which she told the story of “Joe,” an Alzheimer’s patient that Johnson cared for.

“…She came in a nurse’s uniform, and basically read her emails out loud,” comedian and co-host Collins said of Johnson’s monologue.

“Why does she have a doctor’s stethoscope on?” fellow co-host Joy Behar chimed in during the show.

This CNN video report has more:

The View has a history of saying mean things about women they deem insufficiently liberal.

Michelle Malkin has a few thoughts about this latest controversy:

Why “The View” is bombing

You would think that a groundbreaking TV show for women hosted by women would do its best every day to respect and uplift women.

Instead, ABC’s “The View” — originally created by veteran journalist Barbara Walters to represent women “of different backgrounds, different generations and different opinions” — has devolved into an ear-splitting bickerfest of elite divas who scoff and sneer at those who do not enjoy their celebrity privilege or share their left-wing ideological values.

This week, the bratty, catty co-hosts’ targets included the young women who competed for the Miss America title. Michelle Collins, a “comedian” who recently joined the show after establishing herself as a Tinseltown “gossip queen,” savaged Miss Colorado Kelley Johnson. As the other anchors giggled out loud at Johnson’s video clip, Collins mocked the Rocky Mountain beauty not for her looks or her politics, but for a lovely, earnest monologue she performed during the pageant’s talent competition.

Ain’t no hater of normal women like a Collectivist “female”.

What I can’t really understand, is how somebody spends 1 minute of their lifetime watching that junk.

When i was stilldoing martial arts, I knew a Nurse who a medic in Veitnam. He was then in charge of Cardiac/ER nursing in a local hospital. If he told me one thing and a hundred doctors told me something I would believe him.

OTOH my old doctor and my new doctor both don’t trust the blood pressures my present nurses take. Guess hosiptals are like everything else thjese days going cut rate.

I am happy to see the View in trouble, but I do thuink Miss Colorado phone in the talent show part and should be called on it.

There is however no need to trash Nurses in general for what she did.

Misogyny knows no bounds. And, it appears, not many sponsors.

Lol! Joy Behar has long had this coming. She out th nasty B in bitch wrt Sarah Palin and nobody said Jack.

The View was never diverse, they had Hasselbeck as the token conservative and she wasn’t equipped to do battle with the insane leftism of the others.

But face it: the audience has been declining since before Baba Wawa retired, and it was only she who gave the group of witches any credibility at all.

The View was headed for the gutter ever since they put that foul mouthed moron Rosie O’Donnell on.

The departure of Walters simply hastened the decline. While Walters was a liberal hack and exemplified the problem of the ‘neutral’ media cheerleading the Democrats, at least she had experience as a reporter and was smart enough to understand what NOT to say.

Whoopi Goldberg’s no prize, either. I can’t stand her because she is quick to belittle any and all who don’t see things her way ~

Thanks for posting this; I might have missed it otherwise. The monologue brought memories and a pair of overactive lacrimal glands.

I hope that each of these women at some points needs nursing care and that they end up with nurses of the exact skill level they seem to think is standard.

I also find it interesting that this is coming from women who wouldn’t have the dedication nor mental acumen it would take to become license.

I have had the privilege to be a Nurse for 20 years this year and I can’t think of anything that I would rather do.

I would like to give each of these witches a free visit to the Kevorkian family clinic.

Joy Behar asks why she has a “doctor’s stethoscope”? I was recently in the hospital and every registered nurse that entered my room had a stethoscope when it was time to take my blood pressure and listen to my lungs.

How elitist of the ignorant Joyless to assume only Doctors have stethoscopes.

After having failed everywhere else on her own the Joyless twit returns to fail on “The View” and help contribute to their demise.