Knowing what we know now, would Reagan support amnesty today? 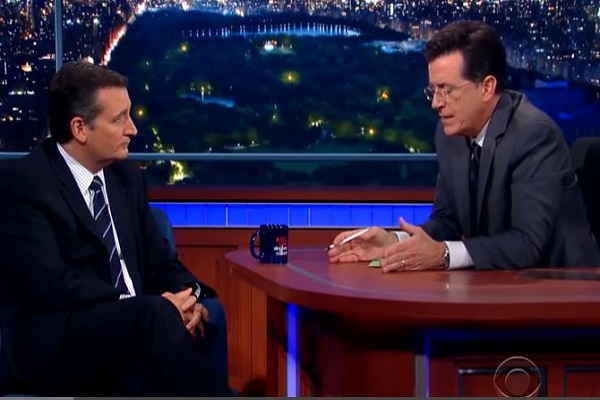 Earlier this week, Ted Cruz appeared on the Late Show with Stephen Colbert.  It was an interesting appearance in a few respects, but what stood out to me is how confident and relaxed Cruz remained in the face of Colbert’s questions and an often hostile audience.

When faced with Colbert’s regurgitation of common talking points among the left about Ronald Reagan (he raised taxes and supported amnesty), Cruz took the questions in stride and explained his own stance on both issues and on conservatism more generally.

Cruz reminds Colbert that Reagan did things with which he can agree:

But Ronald Reagan also signed the largest tax cut in history. He reduced government regulations from Washington. And economic growth exploded. You know, when Reagan came in, from 1978 to 1982 economic growth averaged less than one percent a year. There is only one other four-year period where that is true. That is true from 2008 to 2012 and what Reagan did, he cut taxes. He cut regulations, he unchained small businesses, and economic growth boomed. Millions of people were lifted out of poverty and prosperity in the middle class.

Much of the audience applause comes when Colbert mentions compromise, but it’s interesting that in his interview with Bernie Sanders, Colbert doesn’t push him on compromise at all.  Apparently, compromise is only attractive when it’s Republicans doing the “compromising.”

Last night, Bill O’Reilly did an interesting segment on the Colbert-Cruz interview in which he and his panel review many of Reagan’s policies and how things have changed since then.

The segment begins at about the ten minute mark, watch:

We can’t know what Reagan would do in today’s political and global climate, but one reason that conservatives resist amnesty today is that it was, for a variety of reasons, a failure in 1986.  It’s hard to imagine that Reagan would suggest repeating today the same sort of comprehensive plan that didn’t achieve its intended goals nearly 30 years ago.

Here’s the full Cruz interview on the Late Show:

Anyone who thinks that they are going to out-think or out-debate Cruz is mistaken.

What Reagan would take back is the notion that the 1986 employment law – which is actually quite unconstitutional –
would eliminate illegal immigration in the future.

He would not take back the 1986 amnesty – he’d probably rather provide for the routine granting of amnesty in a more predictable way, instead of waiting for Congress to pass a law.

It’s the claim that that was the last amnesty that has causd all the political problems.

He might not call what was passed amnesty. He might prefer the term “statute of limitations” or some such thing. He would certainly sign anything Congress passed on that question.

Remmeber, Reagan was the person who spoke of people “voting with their feet.”

That’s not the kind of person who would try to make that impossible.

I could see him maybe supporting a law that liberalized immigration and claim that it had been liberalized sufficiently so the problem of illegal immigration would go away, since nobody decent in his right mind would want to do it.

It’s hard to imagine that Reagan would suggest repeating today the same sort of comprehensive plan that didn’t achieve its intended goals nearly 30 years ago.

This time, he’d have to acknowledge that it would not be the last amnesty and he might easily get behind a “Statute of Limitations” type policy.

Reagan did not have any choice, but to sign the Simpson-Mizzolli Act. Both houses of Congress voted for it with a veto proof majority. At the time, both Houses were controlled by DemocRATs.

I would prefer if Cruz instead of defending Reagan’s legacy try to make a point that the cuontry today is to the right of Reagan, and that, yes, we embrace his legacy on economy/foreign policy, but on immigration he was wrong.

Colbert is too big of a douche to last on this show. He’s mildly entertaining… But a masssive douchebag. He ask Cruz for his pitch then slaps “AND NO GAY MARRIAGE!!!” on the end. Fuck you Colbert. Last night he was begging BEGGING Warren to run. Screw you Colbert, you should be ashamed of yourself.

Did you notice the applause (that gets cut off) at the very end, when Cruz says that “If you want to win an issue, go to the ballot box: that’s the way the Constitution was designed”?

He has just explained federalism and the fact that we no longer have it when five people in Washington get to make the rules for 300 million others.

Excellent that he can so very clearly and calmly explain fundamental principles of liberty to a hostile audience, and end up getting applause.

I wouldn’t give Colbert the time of day. I watched a clip of this interview days ago. Kinda slow on the uptake, Fuzzy.

Ted Cruz is magnificent. I hope President Trump appoints him as Attorney General, and then nominates him for the first vacancy on the SCOTUS.

Who else would do this? Bush? Graham? Fiorina? Hah — not a chance!

The lesson is to demand a secure border before talking amnesty and demand that spending cuts be put in place before raising taxes.

Fool me twice, shame on me…

I think Colbert is a funny man, and goes for the laughs. He is definately left-winged in Politics. Any Conservative Candidate that appears on that show, will be ” Mocked.” The Democrats are so scared of this election, that they are pulling out all stops of civility.

To me the best part of Cruz’s appearance was when he completely spanked the host and his prog sycophant audience on The Constitution. The smarmy guy asked him something about gay marriage to which Cruz said that we should follow The Constitution. Colbert and his audience responded with a bunch of boos and bullshit about how it doesn’t mention gay marriage. The Cruz dropped the hammer and reminded them all (which presumes they ever learned anything in civics class) that any power not specifically granted to the Federal Government by The Constitution is reserved to the States and the People. It was such a bitch-slapping that I almost felt sorry for them. Now youtube and the rest of the progressive media are memory-holing it.

Colbert is a comedian, not a journalist. Don’t waste your time with ass-clowns such as him.

Not a fair interview, true. However, there are 2 issues with Cruz’s view. First, all but 1% of the economic boom experienced under Reagan can be explained by monetary policy. That means his fiscal policy was potentially no different than pre 1980s policies in terms of effectiveness. Second, he talks to conservatives when he is on the road, so they will obviously prioritize jobs and economic growth. It’s not a question of what he hears, it’s a question of the proportion of who he hears from vs. who disagrees.

And, of course, there’s the fact that Cruz has always been a supporter of the supreme court (like in 2000 when they denied a recount and gave the presidency to Bush). That’s why his response to Colbert’s statement about marriage equality is potentially inconsisent with his past actions. Doesn’t mean he’s wrong, just means he’s inconsistent.

Finally, his claim about there only being 2 four year stints when economic growth averaged 1% annually is judged mostly false by politifact. 2005-2009, 2006-2010, and 2007-2011 all have average growth rates of about 1%. The averae for Bush’s tenure is barely above the 1% margin (about 1.1%). Obama was only in office for the majority of one of those four year spans (2007-2011), so it seems like Bush is really (mostly) to blame, if we want to do something as irresponsible as pin economic growth on a single individual.