In court filing seeks “coordinating judge” — Ploy to get Judge Sullivan off the case? 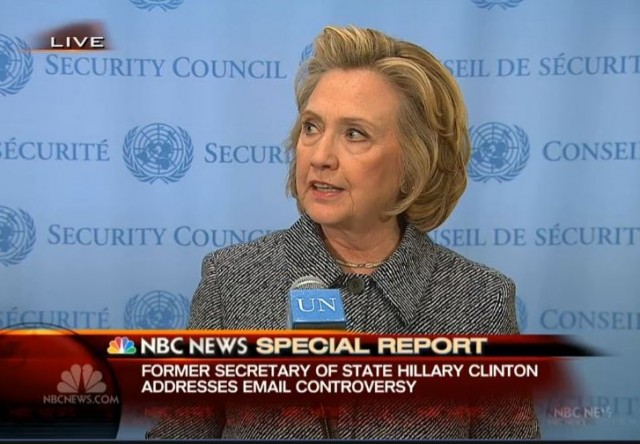 The State Department has filed a Motion to Stay the Judicial Watch case seeking information regarding Huma Abedin’s non-State Department employment, including emails sent and received by Hillary Clinton. The full motion is at the bottom of this post.

The State Department just filed a motion in federal court seeking a “coordinating judge” for various FOIA cases seeking records of Hillary Clinton’s emails, among other things. (Full embed at end of post.)

The United States Department of State (“State”), defendant in numerous Freedom of Information Act (“FOIA”) cases in this district in which the emails of certain former officials are at issue, hereby requests the designation of a coordinating judge to allow the orderly and efficient resolution of common questions of law, fact, and procedure in those cases, pursuant to Local Civil Rules 40.5(e) and 40.6(a).

While seemingly innocuous and purporting to want to streamline court cases, the State Department indicated that it intends to seek a stay of current court cases until the motion is determined:

The Department will be separately filing a motion to stay those portions of this case addressing the documents provided to State by former Secretary Clinton and the other employees whose documents are at issue in this case, until the Coordination Motion is decided, and, if it is granted, until the coordinating judge issues an order determining how to proceed in the cases listed in that motion.

This might have the effect of (1) delaying the Judicial Watch case that has led to numerous disclosures of potentially improper conduct by Hillary and failures to produce records, and (2) potentially removing Judge Emmet Sullivan from at least parts of the case. Judge Sullivan has harshly criticized State Department behavior as well as what he termed Hillary’s failure to follow policy:

Here is the State Department Motion to Stay:

[Note Judicial Watch had represented Legal Insurrection in FOIA matters including as to David Gregory and the Virginia State Bar, and also is an advertiser.]

After all Hillary’s people and the State Dept. have been nothing but helpful with Judge Sullivan – so I bet he can’t wait to help them stall this even further! The judge should call them all on the carpet and consolidate everything with an accelerated release date, that is, until she is indicted.

Coordinating obfuscation through a likely partisan federal court…is an attempt to wipe the case clean…without the rag.

I’m glad to see you left Rags out of this mess.

Even better would be just having Judge Sullivan named the coordinating judge, lol.

This is all part of a plan to keep the emails out of the public and out of Congressional Republicans until Hillary has the nomination locked up. At that point Obama indicts Hillary and forces her out of the Presidential race, thus freeing her delegates to choose Obama’s preferred unvetted candidate, Michelle Obama.

This COULD result in having Sullivan appointed the “coordinating judge”!

Ol’ Walleyes has compromised national security, not just diddled the email laws. She NEEEEEEEDS to go down. I mean in the Federal penitentiary sense.

She needs to be in prison – sitting on death row.

That is the easy and Judicially Efficient way to handle it. Say to State ‘Ok. You get your wish. Judge Sullivan is appointed as Coordinating Judge.’

Make it an expedited motion with a really, really short timetable (or, better yet, have Judicial Watch “agree” to the motion, provided that Judge Sullivan is appointed and ALL the cases are transferred to him to oversee (effectively make it a ‘class action’).

One of the people in the State Department involved in reviewing the e-mails before releasde used to work for the same law firm as the Clinton lawyer, David Kendall.

That may indicate Bill and Hillary still have some friends there.

I believe the “employee” in question is Huma Abedin, not Hillary Clinton.

This is an act of Treason on the State Department’s part.

Huh? What do you mean by that? How could this possibly be construed as treason? It resembles treason about as much as it resembles a potato.

The Department will be separately filing a motion to stay those portions of this case….until the Coordination Motion is decided…

Non-lawyer question. These cases have been proceeding independently for years (many years too long, due to the State Department’s own conduct). Why can’t they just continue to proceed independently until the motion for a coordinating judge is decided?

I can’t see why a stay is necessary, or even a valid request.

But do they have a point? Does their request for a coordinating judge create some valid reason to ask for a stay?

I don’t see how one leads to the other.

Well, it IS pretty ironic and hypocritical. It’s like the side that’s been stonewalling and abusing discovery demanding a “discovery master” to intercede. They usually have relatively HUGE reserves compared to the side just seeking normal discovery according to the rules. It’s a game of attrition.

So I take they’re just flinging their own dung at the wall hoping something sticks.

Agreed. If State were truly interested in “streamlining” and not merely “stonewalling,” why wasn’t this request made a long time ago? The request is not timely, the judge should deny it.

Bryan Pagliano, the IT person who helped set up Hillary Clinton’s private e-mail server, plans to take the 5th amendment, according to the New York Times.

He was the information technology director for Mrs. Clinton’s 2008 presidential campaign, and later was an adviser and special projects manager for the chief technology officer of the State Department.

He left the State Department in February, 2013, the same month as Hillary Clinton.

A Clinton campaign aide said that Mr. Pagliano’s decision was “both understandable and disappointing to us, because we believe he has every reason to be transparent about his I.T. assistance.”

Isn’t this the first time the public has been made aware of ANY part of the State Department’s IT infrastructure staff, being aware of, let alone participating in, let alone performing maintenance upon, Hillary’s private server.

Bryan Pagliano was probably really working for Hillary Clinton, not the State Department, even if she wasn’t paying him. It’s not clear to me when he set up the server, and it looks likwe he was more like a consultant to teh State Department, with no boss.

This means Cooper would have had total control and access over the contents of the server. I wonder what his security clearance was, mmmm?

How many other servers have Hillary’s classified emails in their logs ?

“How many other servers have Hillary’s classified emails in their logs? ”

Just the U.S.? Or including the ones in China and Russia too?

Dang it, accidentally gave you a thumbs down, when replying.

Next time, just click the up button and it should erase the down button.