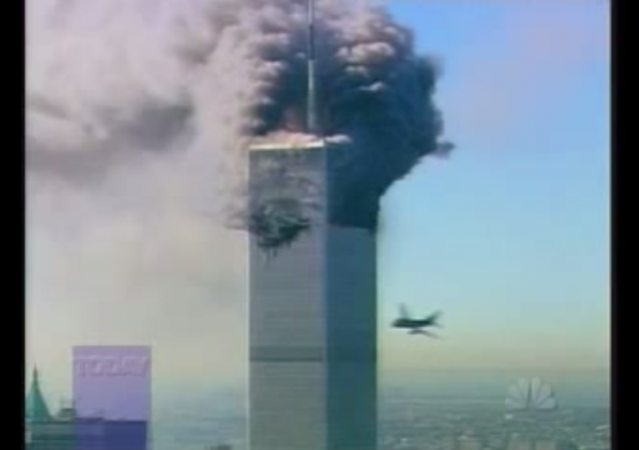 I was at my desk in Providence, RI, when I heard the first reports of a “small plane” hitting the World Trade Center. Seemed odd, but not out of the realm of possibility.

Slowly, it became clear it was no accident, as the South Tower also was hit (at 31:20 of video below).

And then the Pentagon was hit

And then the unthinkable, the Towers collapsed:

As passengers on United Flight 93 heroically fought to gain access to the cockpit, without success as the hijackers crashed the plane in Shanksville, PA:

Memory is a strange thing.

There are many things I remember about the attacks on 9/11/01:  The first announcement when I was at my desk in Providence that a “small plane” had hit the World Trade Center, the announcement of a second “small plane” and then the reality; the collapse of the buildings, something that was unimaginable; the films of people jumping from windows above the flames; and the images of medical staff at St. Vincent’s Hospital and elsewhere who waited for thousands of injured who never appeared because there were so few survivors.

But three things keep coming back to me.

First, the missing persons flyers posted throughout downtown New York City.  Whether on walls or held up by relatives on the street, each poster represented grieving families and friends….

Second, the sound of the PASS (Personal Alert Safety System) alarms worn by firemen, whichcontinued chirping after the buildings collapsed, each one representing a life lost.  I never have been able to erase that sound from my memory:

Third, the farewell messages from people trapped above the flames or on Flight 93 left onanswering machines of loved ones.

The one I remember most vividly was that of Melissa Harrington Hughes who was visiting New York on business.  Melissa did speak to her father, who recounts the events here, and then left this message for her husband who was asleep in San Francisco and didn’t answer the phone in time.  When he tried to call her back, the call didn’t go through.

And yet our president and the democrat party makes deals with one of the leading states of terrorism with Iran, I guess too many people have forgotten,

The plan was to bring down the towers and cause a domino effect with neighboring buildings coming down, and to take everything down into the underground areas.

They intended tens of thousands of casualties.

They also intended to bring our economy. They attacked our stock exchange. Unfortunately for them, the people who were responsible for our security (including the security of the twin towers) understood that such an attack was possible, especially because it had been tried about ten years, before.

And so, the records of our stock market were decentralized by the time the 9/11 attack actually came. We lost people. We lost a million jobs. We reconstructed all the trades, and reopened our market.

Looking at those towers on television, I thought tens of thousands had died. I mourn each life lost, but rejoice that the numbers were far fewer than looked likely on that day.

Was that really their plan? I thought I remembered reading that they hadn’t expected the towers to fall, and were surprised and delighted at their success.

I watched the whole event unfold while watching the Today show, saw the second plane coming in and soon followed by the south tower collapse even though the talking head was unaware that such was taking place. Do they ever watch monitors during breaking news events?

And despite this, look where we are today… Worse off when in fact we should have been in the final mopping up process of destroying the evil that nearly destroyed us. Instead we see the civilized world collapsing around us while we are virtually leaderless, immobile and increasingly desperate.

I well remember ChimpyMcHitler BOOOOOOOOoooooosh being savaged by Collectivists for “not connecting the dots”, like he had perfect information and MUST have known that a threat sometime, somewhere, by someone entailed an absolutely novel attack that had nowhere happened in reality.

OTOH, we have a set of dots connected 14 years later in vivid red ink a block wide, and an administration that simply ignores reality, and that’s cool with Collectivists.

9/11 is always a hard day for Americans. This one in particular, given that Barracula has not handed airliners over to terrorists (bad as that would be), but nuclear weapons. And a treasure trove of ways to fund terrorism everywhere.

Rags, if you want to see something really ugly, take a look at the swipe Michael Gerson of the Washington Post is taking at all of the Republican candidates today.

According to Gerson, George Bush got it right: Islamism is a perversion, or heresy, of Islam. He then proceeds to gather up the Washington Post hostile mischaracterization of bunch of different, unidentified people as a way of smearing the party and all of the candidates, because this is what all those raaaacist rubes think. I happen to agree that the terrorists practice a heresy of Islam, and are properly called Muslim heretics. The concept of heresy, however, is a Catholic term, and not the way Muslims speak. They say “not Islam,” as in George Bush’s formulation “This is not Islam.” In Iraq, it took a while for the locals to get their fill of Al-Qaeda. Before the Anbar Awakening, Iraqis welcomed Al-Qaeda in Iraq.

The demonization of people who have merely bothered to educate themselves about what actual Muslims claim to be true about Islam, is beyond foolish. The recent actions of President of Egypt, which is home to the contemporary terrorist movement, demonstrate Gersons fatuity.

The President of Egypt, al-Sisi, has recently had to ask for reform in the wake of a murderous reign by the Muslim Brotherhood in that country

and the locals say it is necessary

The President of the United States, however, has real history of supporting the Muslim Brotherhood in Egypt, not to mention bad faith negotiation with Iraq and failure to put in place the Status of Forces agreement that had been set up for him by the Bush administration. Gerson wholly fails to address the fact that Iraq’s collapse and the emergence of a successor terrorist group had been predicted by strategists as a consequence of the creation of a power vacuum in that country.

Shame on Michael Gerson, for maliciously failing to recognize out loud that the current set of events is the foreseeable result of failed Obama policies, and not Republican racism.

Yeah, I’ve had Gerson down as an idiot for a LONG time.

Which is not to say that he (like Ron Paul or even T-rump) never has anything good to offer. Just that they are USUALLY useless or worse.

I remember thinking that Al Queda had selected the same targets the radical left would have chosen. Many at the time pooh-poohed the idea the American left had power and influence anymore. I doubt they are skeptical today.

I also remember thinking it was an unfortunate way to win a case. I was consulting with a co-worker on a sales tax dispute for her client with the NY Department of Taxation and Finance. The dispute was being handled by their offices in the South Tower, offices that were on the 86th and 87 floors.

With the help of the present administration, the terrorists “won”. Gains made in pushing back against Islamic jihadists are gone as we let Islam reload, retool and all of this from within our gates. The establishment of a Caliphate foothold in the Levant, the willful destabilization of Europe ( and the U.S.) from within by allowing hoards of military age (and trained?) Muslim “refugees” into the West shows an amnesia to the events of 9/11, a willful attempt to not only forget and rewrite the past but undo the future as if this was all a mistake that can be overcome with welfare and a blind eye to danger.

“With the help of the present administration, the terrorists “won”.”

They “won” when GWB decided to bring “democracy” to Iraq. We destroyed the Iraqi military in 3 weeks. Terrorists cannot exist at anything other than a nuisance level, without their state sponsors. After Iraq was destroyed, Iran, the #1 state sponsor of terrorism should have been next. Then the Saudi’s, #2 on the terror sponsorship list.

They “won” when we decided (GWB, the republicans, the democrats) that it was more important to monitor every American and to put every American through a useless “security” juggernaut at every airport rather than destroy the regimes that create, fund, and harbor the terrorists.

They “won”, in short, because the leadership in place never intended to defeat them. It was used as nothing more than a way to put Americans under ever more authority and control.

The pussie/enemy currently in the WH had nothing to do with that.

Are you ignorant? Or willfully blind? I always wonder.

Remember that? Not a teleprompter in sight.

I remember it well.

14 years later a few puppets are dead. The puppet masters are all still in place and planning the next strike.

I was on my way home from voting in the Republican primary for mayor of NYC. I voted for Herman Badillo, and against that fraud Michael Bloomberg, and was walking home feeling good about myself for having struck a futile blow against the juggernaut. Then they cancelled the election and rescheduled it for two weeks later, which is how I got to vote against Bloomberg three times that year.