People are always willing to tell you how and when to eat but the rules seem to change all the time. The newest target for criticism is eating throughout the day or “grazing” as some call it.

Americans’ erratic, round-the-clock eating patterns, suggests the new study, have probably contributed to an epidemic of obesity and Type 2 diabetes. But they can be changed, and the restoration of a longer nighttime “fast” shows promise as a means to lower weight and better health, researchers add.

In a study that detailed the consumption patterns of just over 150 nondieting, non-shift-working people in and around San Diego for three weeks, researchers at the Salk Institute in La Jolla found that a majority of people eat for stretches of 15 hours or longer most days — and fast for fewer than nine hours a night.

The report contains important information about consumption events (emphasis is mine):

Despite participants’ typical claim to consuming three meals a day, “a breakfast-lunch-dinner temporal pattern was largely absent,” the researchers wrote in an article published Thursday in the journal Cell Metabolism.

The participants ate and drank pretty much all day, researchers found. The 10% of eaters whose consumption “events” were most limited averaged 4.22 a day. The 10% who ate most frequently averaged 15.5 noshes per day. Fewer than 10% of participants went for more than 12 hours without eating.

If any of this sounds familiar to you, it might be because you read the 2012 article in The Onion: 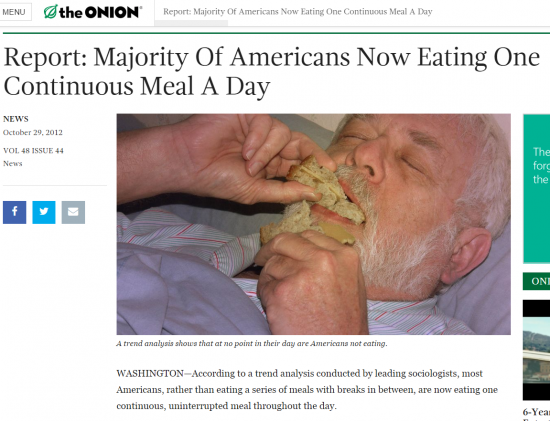 WASHINGTON—According to a trend analysis conducted by leading sociologists, most Americans, rather than eating a series of meals with breaks in between, are now eating one continuous, uninterrupted meal throughout the day.

“What we’re seeing is that for the majority of citizens, the process of eating now begins the instant they awake in the morning and then continues ceaselessly through the entire day until the instant they go to sleep,” sociologist Donald Sims told reporters Monday, noting that at no point during their waking hours are Americans not in some stage of consuming a food product. “In other words, a meal will not end after a food item, or plate of food items, has been eaten, but will instead continue uninterrupted for the next 16 hours or so.”

According to The Onion, this day-long feast would simply be called “Meal”:

By evening, sociologists confirmed, this continuous stretch of consumption, now known simply as “Meal,” is commonly eaten at or delivered by a restaurant, and ingested from early evening until bedtime, which today is defined as the hour at which the food runs out.

And by the way, that counts as two consumption events.

Just wanted to give an update on the adblocker saga.

I have an adblocker, mostly for the purpose of getting control of those awful videos that auto play, and sometimes override my attempts to turn them off. I’m not real fond of popups, particularly the ones that obscure the text, or blink anywhere on the screen, but in my experience, those can be killed easily.

I unlocked my program for Legal Insurrection at the Professor’s request. So far, so good. You are doing better than other sites.

When I go to Breitbart, the site is barely readable because it is so slow, and I do not go to the site when I carry my laptop, because of the verdamndt videos. The Washington Post also has videos that play without permission.

Breitbart, of course, is being swamped by sock puppets and malware. It is a target for the kind of people who publish other people’s private information, and commit other civic sins. The Washington Post has no such excuse.

I regard auto-play ads as theft of my computer resources, and my scarce time. Highly unethical.

To respond to the root post, according to anthropologists, we were for most of history “grazers” who ate opportunistically. The idea of hunter-gatherers sitting down to breakfast, lunch and dinner is silly!

Even in our latter history as agrarians, we probable ate much the same way, but more sparingly than we have the ability to do now. It is not beyond reason to suggest that “meals” at the beginning and ending of the work day did come into practice sometime in this period.

Still, we DID enjoy feasts periodically, even in the Stone Age. The ideal may be to eat so as NOT to celebrate a feast every day.

Pac-Man is taken to the next stage when all the pac-dots are eaten. You must watch out for Blinky, Pinky, Inky and Clyde. Go for the Power pellets in the four corners to overcome the enemies.

Go to Pizza Hut to get a pizza…be subjected to a background check, and 24 hour waiting period, before taking delivery of the pizza.

In Illinois, you’d need a FOID card (Food Orderer’s ID) to place a food order at a fast food joint. Only those with a FFL (Federal Food License) would be allowed to sell food, legally.

Of course, all of this would inevitably lead to a black supermarket of illegal food!

As our most illustrious president has recently advocated, you solve the problem by selectively enforcing the laws.

Later on you can invite a world famous chef to the white house and, while wearing his most illustrious white chef attire, speak on the plight of food subjected to the black supermarket and impress upon congress the need to open wide the food panty and allow equal food access/distribution to all…..especially those south of the border. But one word of warning: you must not under any circumstances ship the food to them, you must bring them here to get it!

I eat constantly, from the moment I wake up until I pass out late in the evening, but the effort it takes burns all the extra calories. *ding* Ah, my Lean Pocket is ready.