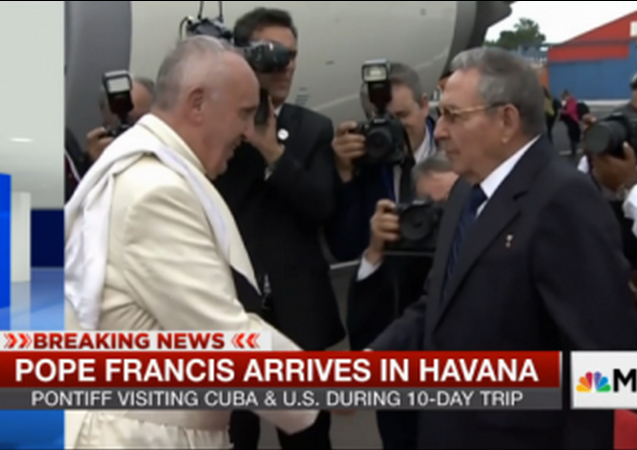 Pope Francis stopped in Cuba on his way to a Tuesday arrival in Washington, DC.  While there, the Holy Father took a victory lap for the restoration of diplomatic relations between the two countries.

Pope Francis landed in Cuba on Saturday, quickly calling on the communist nation to “open itself to the world,” while praising its recent restoration of diplomatic ties with the United States.

Francis was greeted by President Raul Castro at Jose Marti International airport in Havana, where the pontiff urged Cuba to grant its people the “freedom, the means and the space” to practice their religion, an implicit criticism of the sharp restrictions the country has placed on faith.

Obama should be grateful to the pontiff, who helped the President achieve a very rare foreign policy “success”. If he is, the Obama sure has a strange way of showing it.

In a stunning show of political indecorum, Obama has invited a series of individuals who publicly flout Catholic teaching, including a pro-abortion religious sister, a transgender woman and the first openly gay Episcopal bishop, along with at least two Catholic gay activists.

Truly, this is the sort of SmartPowerTM move we have come to expect from the White House.

However, Huckabee is not Catholic. So, just how outrageous is this guest list to Catholics?

The Vatican official – who asked not to be identified – said that officials in Rome were not “overly concerned” that the White House guest list for the pope’s welcome party in Washington included guests that could be considered controversial for the church.

But the person added that it would be the White House, not the Holy See, that would find it embarrassing if the welcome party, which will partly be held on the South Lawn and will include 15,000 guests, looked like a political stunt.

This corresponds to my sense of Pope Francis, who seems to relish reaching out to groups and leaders not usually favorably disposed to the Catholic Church and is noted for his graciousness. Any attempt to embarrass the Pope will backfire.

Other Catholics concur. San Diegan Maria Capossere-Belflower says she worries that Obama is, “is setting him up to make him look like a fool in the eyes of the faithful”. She is holding her breath for the duration of the papal visit.

Long-time Catholic Duane Uptain asserts that Pope Francis will behave with the humility and decorum we have come to expect.

But it certainly won’t be lost on him that the President is going out of his way to use him as a political pawn, and is attempting to force him to appear as if he approves of such lifestyles, even though the church teaches they are not righteous in essence. Francis is not stupid.

However, Obama isn’t the only source of anger…many Catholics are upset over the Pope’s ignoring dissidents in Cuba in the first leg of this American tour. Cuban-American talk show host Silvio Canto, Jr. has these observations:

As I hear from Cubans in the island, there were many who put a lot of faith in Pope Francis. They thought that the intervention of the pope would put pressure on the Castro regime to make changes, from freedom of the press to more tolerance of the Catholic Church.

In the meantime, the regime has arrested 50 of “Las Damas de blanco,” or the ladies who dress in white and march every Sunday after Mass for the release of political prisoners.

It’s hard to believe that Pope Francis will not meet with these ladies. They are not violent. They are devout Catholics. They are the wives and mothers of political prisoners.

Pope John Paul II visited Cuba in 1998, praying for more freedom and peace for its people. The Cuban people are still waiting. That Pope Francis ignored the dissidents does not bode well that anything will change in the near future.

Pope Francis has a busy itinerary, with stops in New York City and Philadelphia after the nation’s capital. Personally, I am bracing myself for his address to the United Nations, where he is planning to talk about his climate change encyclical.

Others have their own issues with the papal agenda. Native Americans are already protesting the canonization of Junipero Serra, based on brutal conversion tactics!

My climate forecast for the remainder of the visit is warmth from the Holy Father, with a significant chance for demonstrations, politicization, and drama.

Exactly what we expect from a no class clown.
He sent homosexuals to commentate for the US at the Olympics in Russia. Just to spit in Putin’s face.

A victory laps? It always seemed more like he was flipping me the bird.

Will the pope enjoy his Spitehouse visit?

He did it because it will play well in his party. And, the Pope will likely take it well.

…an implicit criticism of the sharp restrictions the country has placed on faith.

And all the Pope can do is make an “implicit” criticism ? What a freaking clown !!

I just thought when obama wanted to close Gitmo and released terrorists, he wanted to give it to the Cubans. h/t The Examiner

“Castro thanked the pope for facilitating negotiations that led to a detente between the United States and Cuba. Castro is also calling for the end of the U.S. trade embargo on Cuba, which he called “cruel, immoral and illegal,” and the return of the U.S. naval base at Guantanamo Bay.”

And now the other clown is spitting in the Pope’s face, humiliating his faith, and HUMILIATING all followers of his faith in an open display of disrespect, but “His Holiness” does not have the wevos to cancel the visit.

Obama is acting within this age’s spirit of the anti-Christ.
It is hard to tell whose spirit is controlling Pope Francis. The Pope is pretty much lukewarm about everything except, of course, the populist issue of CLIMATE CHANGE.

The Pope is too classy for this, but I’d love to see him redirect his motorcade and go pay a pastoral visit to wounded veterans at the local V.A. hospital, with his spokesman issuing a statement that the plight of these veterans, abandoned by their country, seemed more urgent than a frivolous carnival down the block.

With him, the “religion question” has never BEEN a question. Remember, he’s a opportunistic Collectivist, PLUS a really pathological narcissist.

He has no other gods before him. That’s his first and greatest commandment!

I have to believe that the White House staff coordinated with the pope’s staff about who the pope would be greeted by. I think the pope’s staff likely approved of the guest list. Since the guest list is stacked with homosexuals, transvestites, and abortion activists, maybe the pope plans to use the event to announce some sort a change in church doctrine. I seem to recall a story a couple of years ago that Nancy Pelosi was refused sacrament because of her abortion views. I think the same is true of some of the Kennedy clan. Maybe the pope plans to use his visit to announce a change in who can take sacrament.

Francis is a very left wing pope who was elected by the Cardinals. Presumably, they had some inclination about his political views when they voted for him. They should have known that he’d use the papacy to promote his politics. Just as John Paul II used it to promote his anti-communist views. Francis is who the Cardinals representing Catholics all over the world wanted.

It is my understanding Francis was against Liberation Theology as an Archbishop, but now may embrace that philosophy. This presumably after a visit (at Francis’request) by a strong proponent of that philosophy, Father Gustavo Gutierrez of Lima, Peru, author of “Toward a Theology of Liberation”. That visit occurred almost immediately after Francis became Pope. Many think he was influenced, and some of his recent decisions seem to indicate that. What he was and what he is are two different creatures. Gutierrez is also a Jesuit, the most liberal order of priests in the Catholic Church.Francis will either explain away this abomination that confronts him, or ignore it altogether.

You are on point. The mystery is why the College of Cardinals selected this boob, much as why we voted for our boob.

cad (kæd)
n
1. Brit a man who does not behave in a gentlemanly manner towards others

1998 Precursor: Clinton’s appointment of flamboyant Hormel to the Ambassadorship of Switzerland, a VERY CATHOLIC nation. Perhaps the most old-school Catholic nation in the world. See http://www.washingtonpost.com/archive/opinions/1998/04/18/behind-those-embassy-doors/e0a20029-325e-49d7-b229-a03dfedaf5c3/

Obama is not Christian. He is a pro-choice doctrinaire. He wants to celebrate institutional discrimination under a congruence (“=”) policy with notably selective/variable moduli. Let him take victory laps and reveal his degenerate religious/moral philosophy to public scrutiny. Raise the Rainbow flag to commemorate progress of the State-established pro-choice cult.

Man, do we ever need regime change…