is it too early to talk second spot on the ticket? 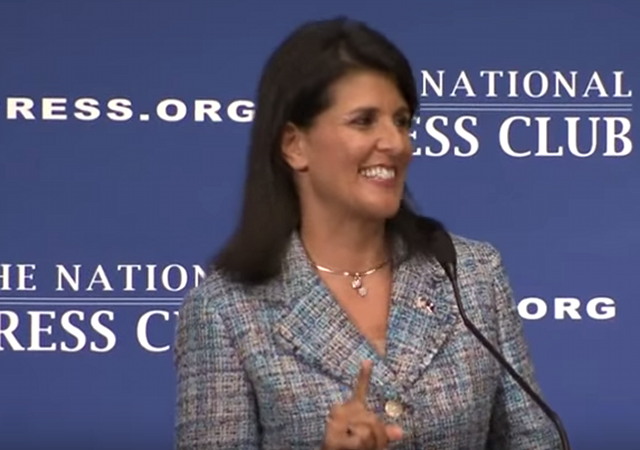 Back in July, South Carolina Governor Haley’s choices in the wake of the Charleston shootings led many to wonder if she’d be a good choice for VP on the Republican ticket. Now, there’s new speculation.

Is she selling the New South or auditioning for a 2016 presidential campaign spot?

Gov. Nikki Haley of South Carolina is generating buzz that she’d be in the mix for the Republican vice presidential spot in 2016, following her successful handling of the removal of the Confederate flag from the statehouse grounds after the shooting deaths of nine African-Americans inside a historic Charleston church.

Appearing Wednesday at the National Press Club, Haley teetered between deflective and receptive to the VP talk, at first dismissing it as a way-too-early political exercise, given that 17 Republicans are still elbowing each other to win the Republican presidential nomination.

“I’m not wasting any energy or any time thinking about that because I’ve got too much to do,” she said after her speech. “I’m trying to continue to heal the state, we’re trying to get back on track because we lost time, getting ready for a legislative session. . . . I’ve got a son in middle school, I got a daughter who’s a senior in high school, I’ve a husband who just came back from Afghanistan.”

This Associated Press video highlights Haley’s appearance at the National Press Club where she spoke about minority outreach for the GOP and other issues. It includes a VP question:

For anyone who’s wondering whether or not Haley would appeal to conservative Republican primary voters, here’s a recent story from Andrew Shain of The State:

In a letter to S.C. Department of Health and Environmental Control director Catherine Heigel, Haley asks the agency to “engage in a prompt and comprehensive investigation of the policies and practices of abortion clinics in our state, prioritizing those affiliated with or owned by Planned Parenthood, its subsidiaries, and its affiliates.”

DHEC oversees the state’s abortion clinics, including one in Columbia run by Planned Parenthood. Other clinics are in Charleston and Greenville.

“Over the past weeks, I have been shocked by recent accounts of unethical practices at clinics affiliated with Planned Parenthood, particularly those regarding the sale of human fetal tissue,” Haley wrote.

Frankly, I would rather see Carly F. as the VP pick right now and save Haley for a possible Presidential run in 8 years. Just my thoughts.

Fiorina is a RINO/Leftist on far too many issues:
https://www.conservativereview.com/2016-presidential-candidates

I will vote for neither of these. Fiorina is an Islamist symp. Haley is an opportunist of the first water.

With so many good candidates right now, obviously only one can go forward. It’d be nice to see some of the others take a few of the cabinet positions. I don’t know much about this Haley, but she rolled over for the over-zealous PC crowd rather quickly on the Confederate flag. I think I’d pass on her.

No to Nikki & no to Carly. Both raised on Purina RINO chow just like Christie & ¡Jeb!.

I’m sure GOPe would love to have her there with Shrub.

Horse Face and the Shrub?

Not my first choice, but I think she’d take it.

Her prospects have always been good, but her joining — and egging on — the jihad against the confederate flag does her no good. I understand that as a Republican she had no love for it, and probably wanted to get it down long ago, but when the race hustlers cynically linked it to the Charleston shootings all fair-minded people should have temporarily rallied around it, and instead she piled on.

Nikki Haley?!
You mean Nikki “I surrender to the P.C. maniacs who demanded the removal of the Confederate flag” Haley?
If her, why not McCain?

McCain, Haley? “What difference does it make, at this point?”

I agree with the flag protesters about how Haley caved to the PC crowd with no evidence that the flag had anything whatsoever to do with the tragedy. One of the things that makes Trump so interesting is that he is the opposite of PC. We have had enough of the go-along-to-get-along people and we know them as RINOs!

BTW, I saw Haley at RedState and was not impressed. She talked about how she stuck her neck out to have the flag taken down and finally got some lame state pol to back her on her decision. This is all she talked about. It is her badge of honor and she thinks it makes her fit for higher office.

Walker/Haley would be a solid team, since they’ve both been attacked and vetted by the left already.

Walker, GOPE because he lets them control his answers. Haley, never.

The one who embraced Al Sharpton? No thanks.

No. I meant Nikki Haley.

But you want to be consistent and say “No thanks” to T-rump on the same basis, right?

If you can’t see the difference between Trump’s relationship and history of interactions with Sharpton in New York and Nikki Haley’s opportunistic, fear-based, PC-induced pandering on that stage, I’m sorry. The two things aren’t comparable, as a reasoning adult observing the world of politics would understand.

How much money did Haley give Sharpton, you “reasoning adult observing the world of politics”?

Wow, I missed that news. But you’re right, that should rule her out of contention. No decent person could be in the same room as Sharpton without wanting to punch him in the face. (Doing it is an entirely different matter, of course.)

But you aren’t a Christian…or a lady at a funeral.

She did what her conscience and beliefs led her to do, seems to me….

And apparently her conscience and beliefs are such that she didn’t find Sharpton too loathsome to hug. I think that should rule her out of consideration. What a pity.

Yeah. Like the Christian families of the slain in Charleston who forgave Roof.

But that was rank pandering, too, I suppose….

They had no right to forgive him, since they were not his victims. They could only forgive the indirect harm they suffered as a result of his crime, but not the crime itself. Only the victims can forgive that, and they’re not talking, but I doubt they forgive.

In any event, none of them hugged Roof, and I don’t believe any would.

To punish Ronald Reagan for wining the GOP nomination by popular vote, the GOPe make him pick Bush 1 as a running mate – look where that got us.

Let Donald make his own choice, not a career politician I hope but whoever he chooses is fine with me.

Nobody made Reagan choose Bush. He thought it would be a good idea.

Actually it was more of a wuick let’s get it over with thing after the Ford fiasco.

I’m a SC resident…..I voted for her twice simply to keep the little rat Vince Sheheen from taking over the helm. Haley has been proactive in getting businesses to relocate to SC, but how much of that is actually of her doing and not the fact that SC is a “right-to-work” state that isn’t friendly to unions? Other than being lucky enough to be in the Governor’s mansion when Volvo decided to announce building of a manufacturing facility here and Boeing coming down south….along with Continental Tire opening a plant in Sumter and the promise of Gita Tire opening a facility on the I-77 corridor Haley has been somewhat of a “meh” character. She mandated that State Employees answer the phone with “It’s a great day in South Carolina” which was sort of difficult for my State employee wife, especially when the person calling was being referred because Medicaid had turned them down. She isn’t as well-liked here as you would think, and the upstate LOATHES her as much as Lindsey G!

It’s because South Carolina is a “right-to-work” state.

He claimed the benefits to his state from the HUGE Reagan defense build up was his doing. Not at all.

Ben Carson for VP. He will be Trump’s trump card…

is it too early to talk second spot on the ticket?

The GOP nominee will be Cruz or Walker. The GOP VP pick will be Rubio.

If the GOP leadership succeeds in sabotaging anyone remotely conservative, the nominee and VP will be Bush and Kasich.

Whoever chooses Rubio for veep will have to watch his back. Rubio is Obama with a glib tongue and a Spanish story.