MSNBC Panel: Hillary Should be More Authentic Like… Sarah Palin

MSNBC Panel: Hillary Should be More Authentic Like… Sarah Palin 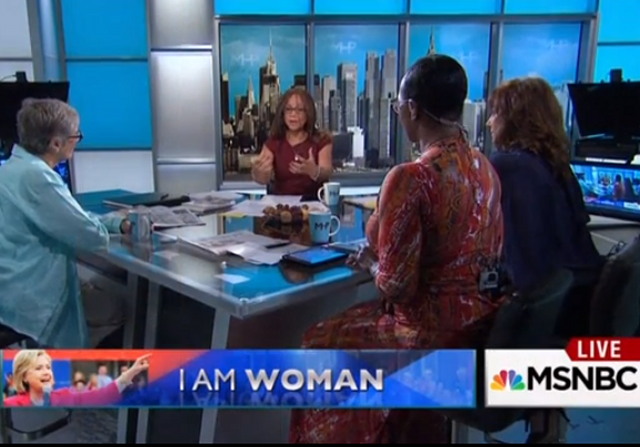 It’s not every day that you hear people on MSNBC talking about Sarah Palin in a positive way and that’s what makes this so much fun. Melissa Harris-Perry and her guests not only agree that Hillary doesn’t come across as authentic, they suggest that Sarah Palin does.

It took nearly seven years, but at long last it’s finally been heard — praise for Sarah Palin on MSNBC.

Even better, one of the people praising Palin — and there were three, count ’em, three libs on the Lean Leftward cable network today doing so — suggested that flailing Democrat Hillary Clinton could do worse than to look toward Palin as a political model to emulate.

The gratifying twofer came on MSNBC’s usually cringe-inducing Melissa Harris-Perry show during a panel discussion of authenticity or the lack thereof among politicians.

HARRIS-PERRY: Well, Sarah Palin was part of changing that, I mean, not because, again, this is that substance versus symbol piece. It’s not like I am generally supportive of Sarah Palin’s policies, but in terms of just being like, well, I’m just gonna run this real differently in my high heels and …

TURNER: She owned who she …

HARRIS-PERRY: She really did!

TURNER: She owned herself.

HARRIS-PERRY: And people responded to that, oh, well that looks …

Of course, this isn’t the first time the two have been compared. Back in April, Ashe Schow of the Washington Examiner wrote:

Hillary Clinton is the Sarah Palin of the Left

One is a grandmother beloved by members of her party in an almost worshipful way, who charges six figures for speeches and has the media drooling to report everything she says.

The other is Sarah Palin.

Whenever a conservative woman enters politics and gains any kind of traction, the liberal media inevitably calls her “The Sarah Palin of ____.” They did it to Kelly Ayotte in New Hampshire, they did it to Joni Ernst in Iowa and just last week they did it to potential presidential candidate Carly Fiorina. The underlying premise of the articles is always that these women are as stupid as the Left’s caricature of Palin.

Outwardly the claims are about Republican women who seemingly come out of nowhere and have the potential to become party rock stars. It’s the rock star part that applies to Hillary Clinton. (Obviously she didn’t come out of nowhere, she rode there on her husband’s coattails.)

I am sorry.
Believe me that I thank you and I appreciate your going through the pain of watching Harris-Perry and Co. for us.

I don’t have a stomach to watch that clip, whatever it is that they said. I will trust your word.

Welcome to The Twilight Zone.

They’re showing “V” on UNIVISION… and most European broadcast channels.

If you pundit types would quit watching these shows they’d just dry up and blow away. Nobody but my wife’s grandmother who used to rant at Walter Cronkite from eight inches from the screen and you pundits still watch these shows.

“Hillary Clinton is the Sarah Palin of the Left.”

Oh sure, the people are going absolutely ga-ga for Hillary, love her to death. Why, it’s like 2008 and Sarah Palin all over again. A nation falls in love!

Omg, where do they get these ideas?

Hillary Clinton is the Brooklyn Dodgers of the Left.

What they are really saying is that they want Hillary to be less authentic. What you are seeing is what she is. A person that is completely motivated by money and politics that most voters can’t relate to in any genuine way. There is nothing that she can do now that can prove she’s “one of us”, because nothing is further from the truth.

Keep hoping for something that’s not reality Democrats, because that’s what you do.

I was typing as you sent your comment out. We were thinking the same thing I think!

By “authentic” the delusional left means to be effective at appearing to be honest, competent, or even human. Clinton IS being authentic. She is just terrible at appearing to be Palin. The left does not like what they see which is who Clinton really is. They want a skilled fraud like Bill was.

Bill is a reprobate and Leftist scum. But he is likable scum. He is at ease with people in a way Hillary is not.

If Sarah ever became politically relevant again they’d be first in line to publicly savage her.

Palin is still extremely “politically relevant,” as her invited guest status at both the Cruz/Trump rally and the Paul Defund Planned Parenthood rally last week. Why did they want her there if she has no political relevance left?

Also, her meeting with Senator Sessions. And probably several other meetings that we don’t know about while she was in DC.

BTW, Cruz, Paul, Rubio, and Fiorina, all benefited from her political irrelevancy and have all, in their way, attempted to get her endorsement. Even Bush appeared as a guest on her temporary gig hosting On Point for OANN. And tweeted a few times about it.

They all learned from Mitt Romney’s ignorance of her and keeping her away from the convention last go-round that she is still extremely politically relevant … and one would hope they won’t be repeating that mistake this time around.

I believe George Soros owns who she is.

I should also point out that drawing attention to the things Hillary Clinton was doing in the early 90’s to ‘promote feminism’ is probably not the best idea strategically. She did back then what was politically expediant, which at the time meant covering for Bill abusing women. THAT is authentic Hillary.

Hillary was using Bill even then as a step laddder to the presidency. She knew years ago that it wouldn’t do to knock that step ladder out from under her own feet, so it was incumbent upon her to support him no matter what.

When you have to emulate someone’s authenticity, you should pay attention to the word “emulate”. It tells the story you’re missing.

The scummy, corrupt, incompetent Hillary Clinton should be more ‘authentic.’

Michelle Obama should be more ‘elegant.’

Barack Obama should be more ‘pro-American.’

Anthony Weiner should be more ‘healthy.’

Al Sharpton should be more ‘human.’

The democrat media should be more ‘objective.’

On and on and on…