Thousands of asylum seekers have flooded Hungary’s borders, seeking safe passage into western Europe and away from crises in places like Syria, Eritrea, and Somalia. This mass migration, however, has caused its own crisis. The European Union wasn’t ready for such a rapid and intense saturation of migrants, and the continent experienced a split with regards to how the influx should be handled. Some western countries, led by Germany and France, encouraged their neighbors to relax their policies and expand provisions for migrants; Hungary, however, was one of a handful of countries that held to its strict policies governing asylum.

All that changed on Friday, when the Hungarian government backed down on its refusal to move migrants within its borders, and began busing thousands of people to the Austrian border.

The late-night offer came after days of efforts to repel migrants fleeing war and poverty who have streamed into Hungary in a bid to reach Western Europe, where they hope to begin new lives. Hungarian Prime Minister Viktor Orban had painted his hard-line approach against the mostly Muslim asylum-seekers as a stand to preserve Europe as a Christian continent.

But after a column of migrants more than a mile long streamed onto Hungary’s main highway to Austria, it appeared that authorities felt they had no alternative but to pass the challenge to their neighbor, another country that has been ambivalent about the influx.

By early Saturday morning, the first asylum seekers began to walk across the border into Austria after having been dropped off by buses on the Hungarian side. The buses had picked people up at Budapest’s main train station. After initial hesitation, the crowds began to climb on board, relieved to be en route out of Hungary.

At Keleti train station in Budapest, where thousands of migrants had camped out for nearly a week, the central plaza was nearly empty on Saturday morning except for a maintenance crew hosing down the site.

Austrian Chancellor Werner Faymann took to Facebook to explain that Austria and Germany agreed to funnel migrants flowing out of Hungary to their final destinations in western Europe. 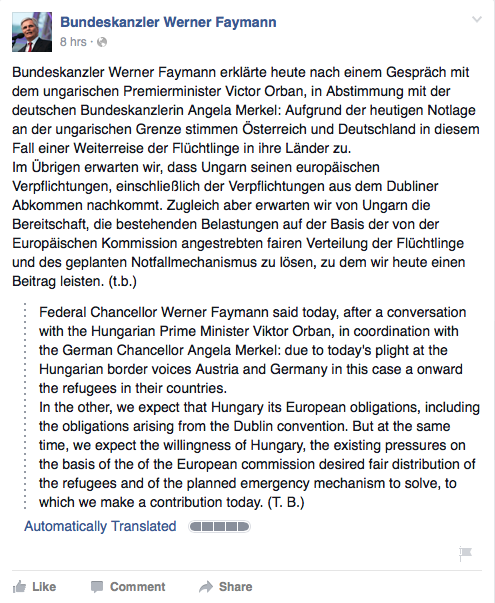 This is a sharp departure from Hungarian policy as it manifested earlier this week, when the government shut down its train stations, preventing migrants from boarding trains bound for western Europe:

Hungary’s right-wing nationalist government defended its U-turn — just days after it started permitting migrants on the trains without any coherent immigration controls at all — as necessary to send a get-tough signal. Cabinet ministers told lawmakers that the nation, struggling to cope with more than 150,000 arrivals this year, was determined to seal its borders to unwelcome travelers from the Middle East, Asia and Africa.
…
Confusion reigned at Budapest’s central Keleti train station as migrants arrived with tickets in hand, often costing 200 euros ($225) each or more, intending to take the morning service to Vienna and the southern German city of Munich. Barring their way were lines of maroon-capped Hungarian police, some of them in body armor.

Police initially suspended all services at Keleti and blocked its grand main entrance. Within hours, non-migrant passengers were allowed through a side entrance after showing passports, visas or other national IDs, while Hungarian speakers were waved through.

Hungarian State Railways announced it would not sell tickets to customers without proper ID and, where required, visas. It said customers could buy tickets only for themselves unless they showed valid IDs and visas for every passenger.

Global awareness of the crisis in Europe soared this week following the circulation of a photograph of a dead migrant toddler. 2 year old Aylan Kurdi’s body washed up on a Turkish beach after the boat he and his family were traveling in capsized. 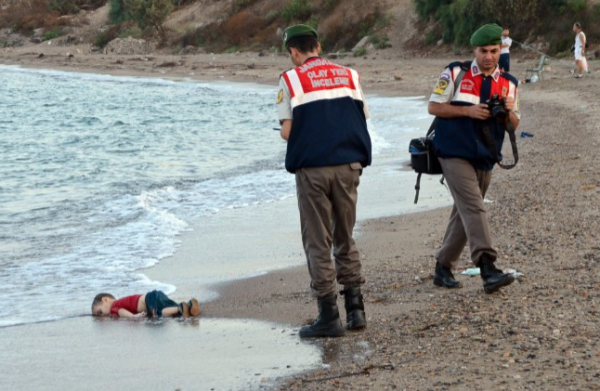 Western Civilization is under attack in Europe and the US. Ironically, it seems that the ruling elites are willing to let that happen, and maybe even to facilitate it.

Our incompetent leaders don’t want to appear to be racist or islamophobic. That is the worse thing that could happen in their minds.

Because of their indifference, at best, to assimilating, and more frequently their intent to bring their failed culture with them and impose it on the rest of us, I refer to the new arrivals as invaders. I take some tiny comfort in the fact that my granddaughters get it.

But the ruling elites love them some non-paid slave labor….

That’s part of it, but the elites, or some of them, are also happy to shred any sense of cultural unity among their citizens — the sense of unity and shared values that exists apart from government structures and dictates.

They’re particularly happy to dilute the Western idea, developed over centuries, that governments ought to be limited in their powers and answerable to the people over whom they rule.

Isn’t it interesting that there’s such a huge immigration/refugee/migration issue in Europe and the US at the same time? Isn’t it interesting that the arab nations won’t take any of their fellow muslims in (especially when Syria is so close to Saudi Arabia and so far away from the US and England and Germany)? Now why is the UN not on the arabs case about not letting them in but is hounding the west to do so?
0 and Merkel (EU) have much to answer for…..as does the silence of the OIC and UN.

Why isn’t Turkey helping out more?

They are funneling migrants out including their own citizens who can’t get work permits in the EU. The drowned child’s family had been in Turkey for a couple of years. They were already safe in Turkey as registered refugees but wanted to go to western Europe for whatever probably economic reasons. The EU rules are wherever you register as a refugee you stay. They don’t want to stay in poorer eastern EU countries and refuse to register and demand to go where the “opportunities” are considered better. This is going to collapse western EU governments. UK voters already want out of the EU. This is a nightmare.

Well you know and I know – the UN is UN ethical…….

Wow. This is an invasion.

That’s where you are wrong. It is a military-led invasion. What we don’t know is which military hand is guiding it. What did Obama and the Muslims cook up? Obama did his bit here with the Hispanics—how do we know they are all Hispanics? When I was blogging many years ago, one of the things I discovered is that Arabs will assume Hispanic names, learn enough Spanish and pass. The invasion that came from our south was paralleled by the invasion of Europe with the hordes heading for specific places.

Why? Who is guiding them? Whose marching orders are they following? The whole thing sounds like Cloward-Piven being used against the West at a time when western leadership is at its most craven and corrupt.

I agree completely. Here in SoCal we cannot always readily distinguish the middle eastern guys from the hispanics.

Never let a good crisis go to waste! What better way to install lots of jihadies in foreign countries than to wage war, cause a massive movement of people fleeing that war and then blend in with the refugees.

Security experts know this is an invasion.

The Daesh have been bragging about precisely this.

The immigration proponents demonstrate a sincere disinterest in addressing the causes of mass emigration, reconciling the dignity and interest of immigrants and natives, and may have an interest to obscure or compensate for the consequences of domestic policy including normalization/promotion of dysfunctional orientations and behaviors, including elective abortion.

This is Mark Steyn on steroids.

Just when you thought Europe couldn’t become any more anti-Semitic.

This is neither coincidence, nor the gut-wrenching exodus some would want the west to believe: it is call ‘stealth jihad’ (Thanks, Barack.)

ISIS smuggler:
‘We will use refugee crisis to infiltrate West’
Read more at http://www.wnd.com/2015/09/isis-smuggler-we-will-use-refugee-crisis-to-infiltrate-west/#XGphGVFZXydp06Y8.99

Note how the Gulf Arabs are not taking any migrants. Because it suits them in so many ways.

Shoot them off the walls. They are INVADERS, not refugees. The first 2,000 killed will deter the next 20,000. They come, they riot, they kil, they demand,… To hell with them. Let them return to their Islamic hellholes. Let their fellow Muslims do zakat by taking them in. They do not come as refugees. Instead, they are an invasion intent on taking the West for Islam, first by impoverishing our countries, and then by waging war on us from within.

Personally, I would give them a choice: convert to Judaism or Christianity. Otherwise, die. If they convert, they must wear a Star of David/crucifix and attend synagogue/church every service.

It seems like Kosovo should be a natural destination.

It’s not about refuge. It’s about invasion. They don’t want to go where Islam dominates. They want to bring Islam to us. So they bring their women and children along so we will feel compassion. Then they don’t explain to us how the father of the drowned child, supposedly a refugee fleeing in fear of his life, could go back home to bury his dead child. That some kind of refugee ther, ain’t it.

Baffling, that he was identified so quickly……

They seem to be using the southern border last summer playbook. Swarm, mostly young men mixed in with women with pathetic children to appeal to western sympathy, non-cooperative in the extreme until they get what they want, overwhelm the immigration systems so their identity cannot be checked or verified, demand free passage to areas with the best and most freebies and the most clueless or globalist leaders (Merkel is asking to be overthrown), explosion of crime to terrify the populace and throw the host political system into chaos.

I’ve had more “likes” on the above comments than Bill Clinton with a front row seat at the Miss Universe Contest. Too bad it means I have had to agree with comments that essentially predict a catastrophe to Western Civilization.