Meet the Press Confronts Hillary’s Flip-Flops in Clinton vs. Clinton

Meet the Press Confronts Hillary’s Flip-Flops in Clinton vs. Clinton 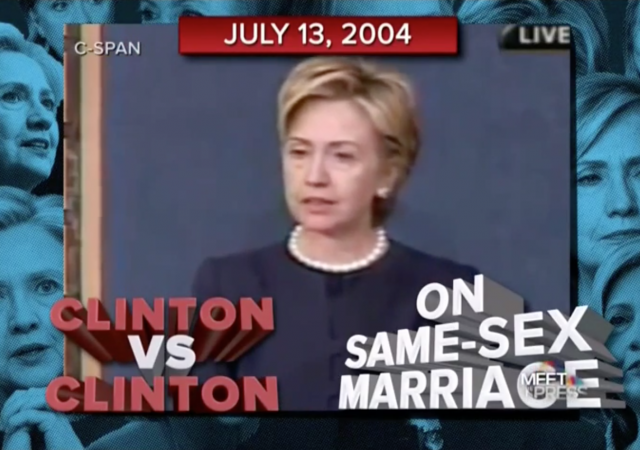 While riding the Sunday talk show circuit, Hillary Clinton encountered what should’ve been a brutal segment on her long-standing history of philosophical changes. On Meet the Press, a damning mashup called Clinton vs. Clinton would have been an uncomfortable for just about anyone one else, but not for Hillary.

The former Secretary of State was at ease watching and addressing video footage of her ever-changing beliefs. Of course it didn’t hurt that Todd didn’t ask one single challenging question, either.

Unlike his interviews with other candidates, Meet the Press host Chuck Todd sat back and lobbed a volley of softball questions at Mrs. Clinton. He didn’t concoct a scenario, like oh, say, “would you build a border wall between the U.S. and Canada?” like he did with now defunct GOP candidate Governor Scott Walker.

Contrast Todd’s method of questioning to Hillary with his handling of guest Carly Fiorina:

While I appreciate the handy highlight reel of Hillary’s flip-flops, let’s not pretend Todd was seriously challenging Clinton’s reed-like tendencies.

When we published this article, the Clinton vs. Clinton segment of Meet the Press was available on YouTube. Moments later, every copy was blocked by NBC News, so we replaced the cut with the video from NBC’s site. 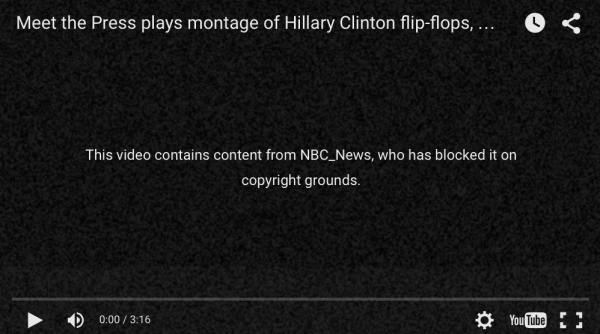 This strikes me as a calculated media strategy that allows HRC to respond to charges of her flip-flopping with “we’ve answered that.” Of course, she’s “answered that” to no one’s satisfaction except her own.

…andddda, the meme has gone out to mavens of the Mushroom Media…

It was a soft ball interview, and she still “performed” poorly. I wish someone would really ask her some tough questions and see how she squirms. We need someone who won’t back down from her, and is willing to ask those hard questions.

Any chance we could get Trump to interview Hillary?

Let’s be fair, Todd need to keep his job.

HRC, Ms. So and So: So many yoga sessions, so much “flexibility”, so much stretching the truth, so much evolution, so much drip, drip, drip….wipe, wipe, wipe…blah, blah, blah…

Hillary treats the the American people with a transparent contempt.

If this were Mitt Romney flip flops, NBC would not be touting copywrite infringement, but hey, at least they made Crazy Super Blood Moon Rising Hillary a little more crazy.