“Now is the time for courageous actions” 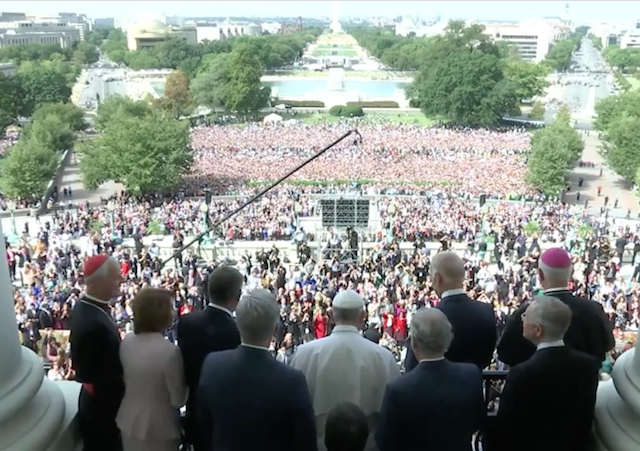 Today, Pope Francis will become the first ever Pope to address a joint meeting of Congress.

The Pope is in the building:

He was calling down our better angels.

I am Catholic, love my faith and my Church, but have not watched, and will not watch, Pope Francis. He is the first Jesuit, and the first non-European Pope; he is true to Church teachings and the catechism. But I cannot continue to tithe as long as he is Pope. This will allow me to give more money to Catholic TV and radio–both of which are “approved” by Jesus. And I’ll continue to pray for the Pope.

Here is the transcript.

No, he doesn’t. But Pope Francis did grow up in a system of corrupt crony capitalism long endemic to Latin America. Unfortunately, that system has been increasingly acceptable to an American media that is willing to ignore corruption so long as the politicians and business leaders who benefit are also advocates of abortion on demand and homosexual marriage.

Parts of the speech remind me of the advice of one of the stoic philosophers who greatly influenced the early church, Marcus Aurelius. The Roman Emperor wrote

The best revenge is to be unlike him who performed the injury.

The head of the Universal Church knows that political trends come and go so winning the current political battle should not be so all consuming, nor should it define our personas. The political right has long understood this. Unfortunately after the combined assault of the Clintons and Obama, too many on the right do seem to be succumbing to the same coarse, all consuming urge to politicize all aspects of the culture and to treat each difference as total war. Shame on them. One can be civil and still remain strong and principled. Marcus Aurelius was no wuss.

I have been a catholic all my life, but I don’t appreciate the Pope trying to insert himself into matters of politics (i.e. national sovereignty and immigration) or matters of science or pseudo science in the case of global warming. Both are things of which he has little knowledge, no divine inspiration or authority, and is poorly equipped by his life experiences and education. I also find some of his blatant double standards in his speeches on politics to be revealing of his lack of any actual understanding of these non-religious matters upon which he likes to pontificate.

I also do not think the republican leadership should have invited him to speak to congress. Just one more example of the GOPe RINOs being tone deaf and brain dead.

Due to Donald J. Trump’s quite proper reactions to the Pope’s speeches on this trip his poll numbers will INCREASE.

I particulary got a good laugh out of his comments to CNN about the Pope’s views of global warming.

He said America shouldn’t “imperil the companies within our country” by mandating environmental regulations that would “imperil jobs … actually the middle class, and actually the lower classes are going to be the people with no money.”

If America does have the problem of climate change, Trump said, “it’s going to be of the nuclear form because we have incompetent politicians watching over us when it comes to nuclear weapons. That’s our big problem.”

Pope Francis: Tear Down the Vatican Wall! – Breitbart http://www.breitbart.com/2016-presidential-race/2015/09/24/pope-francis-tear-down-the-vatican-wall/ via @BreitbartNews As a catholic I agree with @NolteNC and @realdonaldtrump is correct pope is wrong!

John Nolte of NRO on Pope and immigration:

Again, I mean no disrespect but this is coming from a man who lives in a city-state completely surrounded, literally, by giant walls. Vatican City is a literal fortress.

What would happen to Vatican City if it was to do what Francis is asking America to do?

I’m assuming Pope Francis could order such a thing tomorrow, and after the walls came down he could also choose to greet the wave of “pilgrims” with the “warmth of the love of Christ.”

Francis is a traitor to his followers, he would willingly deliver them to their conquerors.