Jeb Pulls a Mitt, Hits Back at Welfare State

Jeb Pulls a Mitt, Hits Back at Welfare State

…but did it help? 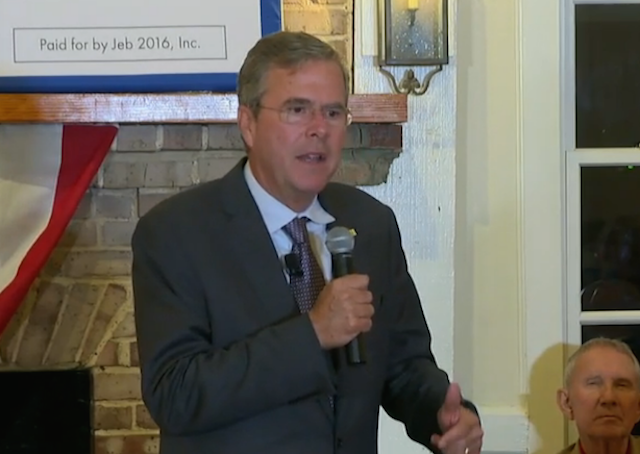 Jeb Bush is lashing out against the entitlement state—but he’s taking a page out of Mitt Romney’s book to do it.

During a town hall meeting in South Carolina last night, Bush touted Republican outreach efforts to minorities by taking a slap at the Democratic tendency to promise a lot of “free stuff” in return for votes. Unfortunately for Bush, however, Democrats (and some Republicans) were reminded of Mitt Romney’s failed 2012 attempts to reach out to a broader base.

“Look around this room,” a man told Bush, who spoke to a mostly white crowd. “How many black faces do you see? How are you going to include them and get them to vote for you?” asked the man, who was white.

Bush pointed to his record on school choice and said that if Republicans could double their share of the black vote, they would win the swing states of Ohio and Virginia.

“Our message is one of hope and aspiration,” he said at the East Cooper Republican Women’s Club annual Shrimp Dinner. “It isn’t one of division and get in line and we’ll take care of you with free stuff. Our message is one that is uplifting — that says you can achieve earned success.”

Was this the best strategy? I’m going to go out on a limb and say that if Bush manages to maintain this narrative and not buckle under pressure, he could take it to the bank—at least with voters not already radicalized by progressive activists’ efforts. Hope and hard work and success is well within the scope of what the Republican party has to offer new voter demographics.

Plus, we have plenty of evidence that lining up for free stuff is well within the scope of what the Democratic party has to offer—and that strategy hasn’t done much to build up hurting communities:

Why? Because he didn’t give her as much free shit as she thought she was going to get?

“How many black faces do you see? How are you going to include them and get them to vote for you?” asked the man, who was white.

They aren’t. And both Republicans and Democrats have stopped even pretending to try.

See, that’s what happens when a group votes on racial lines in lockstep with a party. BOTH parties stop caring about them.

Blacks have proven time and time again that all they care about is the ‘RACISM’ dog whistle of the Democrats and getting free stuff.

So Democrats mouth a few platitudes about blacks and continue to confine them to abject poverty and crime-ridden neighborhoods while pimps like Sharpton rail about white men keeping them down.

Republicans just don’t care anymore. No matter what they do blacks will continue to be racist pieces of shit whining about whitey, so they’d rather spend their energy on people actually interested in bettering themselves.

Bush is as clumsy a politician as Hillary.

And not a dimes worth of difference…

What are the chances the commenters on this web site can make a cogent point without resorting to shock value language? More and more I’m seeing it here. I use the language myself, but it has a time and place. A web site such as this is not it.

We all have a right (within reason) to express our feelings or vent. If someone doesn’t make a “cogent point” that’s their right. Just as you can criticize others for not commenting the way you think they should. That’s the beauty of these blogs. I like to get on blogs during the debates just to read the funny comments. They’re quite entertaining.

I am not disputing a persons right to make comment or whether it’s cogent or not. But a person will more often sway people to their side of an argument without offensive language being the focal point of their comment.

I’m not into the offensive language either. Humorous comments are fine with me. Sometimes if you don’t laugh, you cry – especially after almost 8 years of Obama.

The Obamaphone lady said that Romney sucked… seems like free shit is a pretty succinct and accurate way to sum up what she thought she was getting. That being said, a while back Professor Jacobson personally asked people to be a bit more, well, more civil. At least that was my take. A very reasonable request that most people seemed to respect. It’s his blog, his call.

Just to see what the heck you are talking about I read every comment again. The only possible offensive word is “shit”. Does that really bother you when used in the context – as in “free shit”, or “racist pieces of shit”?

Maybe you should stick to tea parties at the local church.

There is no context for offensive language when trying to persuade people to your side of an argument. The words do not offend me in a locker room or in a private situation. On a forum where you expect to higher a higher level of discourse, yes it is juvenile.

Mike, apparently you do not visit many political “forums”.

There are no special words reserved for use only in “locker rooms” or “private situations”.