“Anybody can talk. I’ve delivered.” 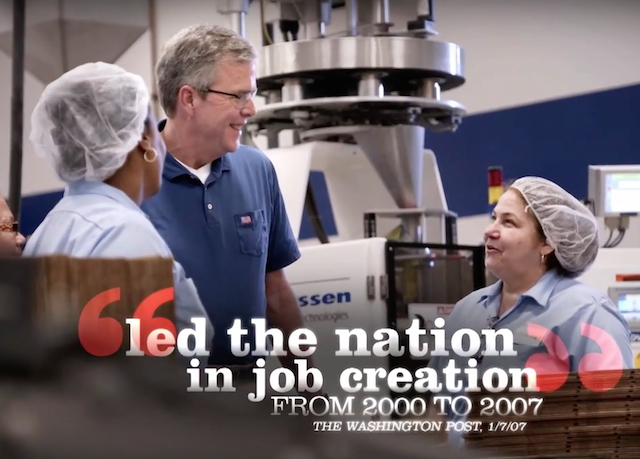 Remember when winning an election meant actually talking to voters about the various candidates’ records and achievements?

Okay, that’s a stretch; but so far this cycle, even with our very crowded and very deep bench, we’ve seen a lot of talk, and not a lot of action when it comes to actually explaining to those elusive primary voters why X or Y candidate is the most qualified to sit in the Oval Office.

Jeb Bush’s latest TV campaign manages to toe the line between touting his record as Florida governor, and hitting back at fellow GOP presidential hopefuls who (and I’ll put this gently) have allowed rhetoric define their candidacies.

We have an important choice to make about the direction of our country.

If you want more DC politicians, or more self-promoters, you’ve got options. I’m offering something different: leadership, ideas, and a proven conservative record.

Anybody can talk. I’ve delivered, and I hope to earn your support.

Short, sweet, to the point. I can’t imagine who he could possibly be talking about when he mentions “self-promoters” and people who can “talk” their way into the hearts and minds of pollsters’ data samples. No idea at all.

The ad will run from next Wednesday until Sept. 29, “with 15% of the initial placement dedicated for targeted online advertising,” Campbell said. She described it as the first step in a “multi-week process to expand the campaign’s advertising in New Hampshire and other early states.”

The post-Labor Day ad blitz, which comes as more people start paying attention to the election, will run alongside another pro-Bush campaign. The super PAC, Right to Rise, also announced last month that it would be dropping at least $10 million on advertising.

Is it an effective ad? Or, at least effective enough of an ask to get the super-saturated northeastern market to take a second look at a third Bush? Possibly. What struck me about this ad is that it’s essentially a 33 second blitz on Jeb’s record—which could end up being what saves his candidacy. His jabs at Trump (let’s be honest) probably constitute as much sass as Jeb Bush’s campaign will ever manage, but they do cast the rest of the field in a negative light, and encourage those targeted with the ad to focus on substance.

Is New Hampshire ready to pivot toward substance? Time will tell.

Yes ¡Jeb! has certainly delivered jobs. How many of those went to aliens or criminal invaders? How many people in Florida just gave up looking after years of unemployment?

How does bringing in millions more criminal invaders help the low end of the job market? I know there are a few illegals writing columns but I doubt any are a threat to your job.

The man can’t even deliver the English language to his own wife and home. How does he expect to deliver anything worthwhile to the US?

“How does bringing in millions more criminal invaders help the low end of the job market?”

It’s an act of love, silly, and you’re peeing all over Jeb!’s good intentions.

Maybe it’s the weakness and insincerity in the whole package.

Something about Jeb!’ is just plain lame.

Here in Florida JEB! Is old news. He was a good governor overall but as president, very few Republicans I talk to want JEB! To be the nominee.

One more thing, JEB! is taking credit for balancing the budget, well that is state law. Even Chain Gang Charlie Crist had to have a balanced budget. Big deal JEB!

A vote is a reflection of a voter’s priorities.

If a voter’s priority is to “make history” by voting for the first female President, maybe he’ll vote for the Wicked Witch.

If a voter’s priority involves jobs in Florida, maybe Bush would be the man.

If a voter’s priority is defending the United States from foreign invasion, Bush will be down near the bottom of the list, no matter how big a whiz he may have been about budgets and spending.

He was a successful governor dealing with many of the issues the nation will face on the next President’s watch. The only thing I have against him is that “dynasty” issue, which is a big one for me. But if the Republican Party nominates him for President, I will happily vote for him, in part because I read his book.

Jeb Bush successful? At what?

He was a mediocre mixed bag as Florida governor. Cronyism everywhere. And before that?” Qualified how? Mediocre academics. No pre-political real-life work experience I can recall at all except that real estate deal he concocted with a couple friends in the 80s in South Florida using the Bush name to get a no-recourse loan that he walked away from when the project went bellyup. Family? His kids continually got into spoiled-kid-type scrapes, drugs and such. His own wife tried to smuffle jewelry and got stopped by customs. The “dynasty” money involved grampa Prescott doing business with the Nazis, brother Neil doing Silverado, brother Marvin making money from educational testing (explaining the hideous Florida FCAT as well as Common Core support), and the Bush family machine is what pushed Romney on us in 2012. We have a field of excellent candidates (Marco Rubio and Kasich also career politicians who have done nothing else are not among them). I cannot fathom why anyone who is not a lobbyist or donor crony would support him.

So many politicans are just slick talkers. I like to start by looking at a candidate’s childhood and how he was brought up. Who influenced him. Where did he go to school and what kind of student. And then, did he or she actually DO anything productive in his or her life before going into politics.

Barbara Bush: “We sold your father as a conservative, your brother as well, and you’ll be sold as the same, young man. There is our network of donors to consider, as well as our family’s historical legacy.”

Jeb Bush: “But mommy, I don’t wanna be a conservative!”

Jeb Bush: “But mommy, I don’t wanna be a conservative!”

“¡I want to be Presidente de los Estados Unidos Mexicanos!”

The problem for Jeb! is that in 2012 he said that he “used to be a conservative” and to many Floridians, myself included, that meant that whatever conservative policies he pursued in our state were effectively wiped out.

How can you claim to no longer be a conservative (or to need or want conservative base support) and still tout your accomplishments before you became a . . . non-conservative?

Jeb is a progressive, and he may be right in thinking that helps in the general election (though I’m not sure that a principled conservative couldn’t win). Getting there, though may be more tricky than he supposed.

As a Floridian I see JEB! as moving further away from Conservative principals. His commercial about balancing the budget and taking credit is a stretch in that all government entities with elected representation has to by the Florida Constitution balance the budget. Even Bernie and Hillary if they were governor would have to fulfill that requirement here as well. If this is the main feature of JEB! he is in trouble.

I’m not buying it Jeb.

NO MORE OLIGARCHS
No more Clinton, Bushes or ANY other chamber of commerce endorsed unit

Yeah, uh huh, leaving aside the issues of 1. politicians always claim credit for things they had very little to do with or control over, and 2. governors of states have state constitutional restrictions on them that force actions that they then take credit for having done…..I will not vote for Jebbie even if Satanette or ClownSatan or RedSatan are his opponents.

For Jeb, that was a good commercial. No one was sleeping in it, at least that the camera caught!