Does it make me a bad person to enjoy watching reaction to Pope secretly meeting with Kim Davis? 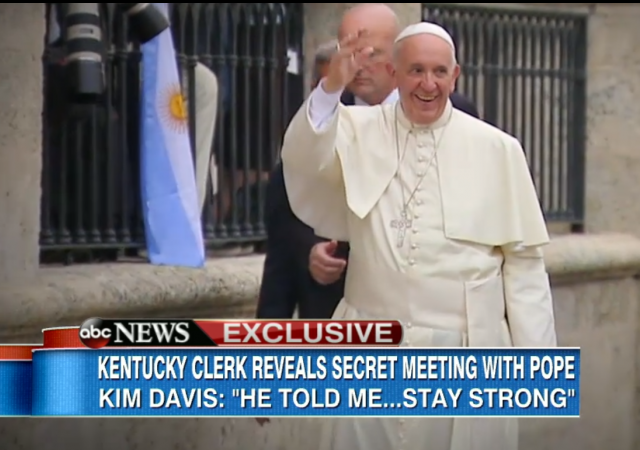 Liberals — who spare no effort to denigrate the Catholic Church — all of the sudden found the Pope’s progressive economic and immigration pronouncements to be just dreamy.

At brunch on the Upper West Side of Manhattan and in Brooklyn, kind words were spoken in the same sentence as “Pope” and “Catholic.” Eyes did not roll.

We can now return to the prior alignment of the political universe. The Pope met secretly with Kim Davis, via NY Times:

Ms. Davis, the clerk in Rowan County, has been at the center of a nationwide controversy over whether government employees and private businesses have a legal right to refuse to serve same-sex couples. She spent five days in jail for disobeying a federal court order to issue the licenses.

On Tuesday night, her lawyer, Mathew D. Staver, said in a telephone interview that Ms. Davis and her husband, Joe, were sneaked into the Vatican Embassy by car on Thursday afternoon. Francis gave her rosaries and told her to “stay strong,” the lawyer said. The couple met for about 15 minutes with the pope, who was accompanied by security guards, aides and photographers. Mr. Staver said he expected to receive photographs of the meeting from the Vatican soon.

Ms. Davis described the meeting in an interview on Wednesday with ABC News.

“I put my hand out and he reached and he grabbed it, and I hugged him and he hugged me,” Ms. Davis said. “And he said, ‘Thank you for your courage.’ ”

“I was crying. I had tears coming out of my eyes,” she said. “I’m just a nobody, so it was really humbling to think he would want to meet or know me.”

Davis’ lawyers released an image of the Rosariers blessed by the Pope and given to Davis (via L.A. Times) 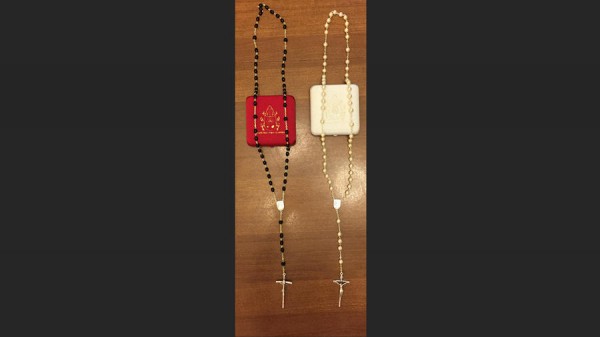 That sound in the distance? It’s leftie heads exploding.

Is it wrong for me to be enjoying watching this? Does it make me a bad person?

This is how a @voxdotcom employee (are they supposed to be objective?) tweets out their pope article: pic.twitter.com/6H0BkudlMO

@Pontifex's meeting with Kim Davis should end our #popecrush. He's only progressive for a pope, which isn't much. http://t.co/IWesBmKu5d

SRSLY. What a reality check of the values of the church. Gross.

All respect for that guy is now utterly and completely gone! http://t.co/OBpphKr05Z

Il Papa declared that the actions of a Kim Davis should be a “human right”!

The left is SO shocked that the Pope would be concerned about a Christian being compelled by government to perform an act contrary to their faith.

Did they think he was an Episcopalian?

Ah. So the Pope didn’t even dare have the meeting on American soil.

He met with her on American soil, but news of the meeting was not released until he had left.

Popes tend to signal as much as they talk. Pope Francis sent another signal when he declined an invitation to dine with Congressional leaders and then popped in for lunch at a meals for the homeless facility run by Catholic Charities.

The timing of this was superb. They are all on record as what a swell guy he is then he offered encouragement to exactly the type of person they cannot stand.

And yes, he sent a lot of messages by how Obama got to shake his hand but members of Congress could not, nor even share a meal with him, but given the behavior of that creep who stole the Pope’s glass of water, I’m not exactly blaming him for not wanting to be associated with them. That and he can read polls too.

The Left is reverting to the norm. I am maintaining my own opinion of Pope Gramsci I.

Oh my! The AlphaMEs are tweeting derisive and angry tweets at the Pope. And all this after “dignity” from above was bestowed upon them by Pope Kennedy!

I thought the AlphaME religious creed was “diversity and inclusion”!

Wow! They so desperately want their bad behavior and whackadoodle globalist theories sanctioned. Not this time. They can go bite the wall.

Oliver Willis: pope francis has made it a part of his holy mission to meet with the dregs of society so the kim davis meetup was on message. no big.

The “dregs of society”?

Why, yes, he did meet with Barack Obama.

The State-established pro-choice cult continues to reveal its unprincipled positions.

Whether it is for evolutionary or religious/moral principles, there is no legitimate basis to construct congruences. The cult and its “=” sect is at a loss for words to defend legal and institutional selective exclusion.

I prefer the more accurate ‘baby butchers’ or ‘child chop-shops’. Every time someone tells me they support PP I am now going to ask them what baby parts come with their supporter level.

I’m not Catholic, so this is not my business.

But by concording with this woman, the Pope is sending a signal to the 40 million + Evangelicals and many more Catholics in the USA: “We’ve got your back.”

Did these ass hats really need a meeting between the Pope and Kim Davis to understand he does not support the gay lifestyle? They will be shocked when they discover he opposes abortion.

A secret meeting or a private meeting? The obvious conclusion is that the Pope wants to encourage her. The situation is complex, however and I don’t think Kim Davis has handled it well. A private meeting means he is not endorsing her position 100% which I think is appropriate.

Heck, Wm, I’m not a Leftie and I can’t abide the Wolf in sheep’s clothing disguised as the Bishop of Rome.

We may never know about all the people Francis met privately. I hope he sent support signals to bolster the pro-life efforts of Hobby Lobby, Little Sisters of the Poor, and the Center for Medical Progress. Perhaps Francis wants to specifically welcome Protestant resistance to the gay marriage agenda. Still, it’s a bit odd that the only news about Francis supporting resistance is a personal meeting with Kim Davis; her objection seems to have the least significance — although her legal issue is rather interesting due to KY law requiring her to put her name and signature to a union in serious discord with her religious principles — see Eugene Volokh at https://www.washingtonpost.com/news/volokh-conspiracy/wp/2015/09/04/when-does-your-religion-legally-excuse-you-from-doing-part-of-your-job/ h/t neoneocon.com.