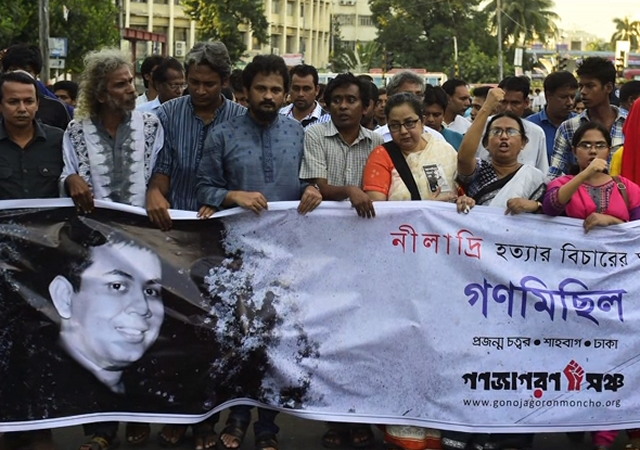 Islamists in Bangladesh have published a hit list of bloggers and writers which includes people in Europe and America. The image above is of people in Bangladesh protesting the murder of a blogger earlier this year.

Islamic extremists in Bangladesh appear to be taking their war on secular writers and bloggers beyond the South Asian country’s borders.

A hit list purporting to be from the militant group Ansarullah Bangla Team has been sent out threatening people in Europe and North America.

“Let Bangladesh revoke the citizenship of these enemies of Islam,” a statement accompanying the list says. “If not, we will hunt them down in whatever part of God’s world we find them and kill them right there.”

The list contains nine people in the United Kingdom, eight in Germany, two in the United States, one in Canada and one in Sweden. CNN isn’t reporting any of the names on the list.

If this sounds familiar it’s because we’ve been down this road before:

The brutal killings of the four bloggers this year have shocked many people in Bangladesh and beyond.

In February, Roy, a Bangladesh-born American blogger, was killed with machetes and knives as he walked back from a book fair in Dhaka.

A month later, Washiqur Rahman, 27, was savaged by two men with knives and meat cleavers just outside his house as he headed to work at a travel agency in the capital.

Das, 32, was set upon with cleavers and machetes in May as he left his home on his way to work at a bank in northeastern Bangladesh. And less than two weeks ago, Neel was hacked to death in his Dhaka apartment.

The Guardian has more on the group behind the current threat:

The list was issued in a statement on the internet by the Ansarullah Bangla Team (ABT), a group that has been blamed for a series of murders of bloggers and activists in Bangladesh over the last 18 months. All those killed have been prominent critics of extremist religious doctrines, especially in Islam.

The acting leader of the ABT and two close associates were arrested earlier this month in Dhaka, the capital of Bangladesh, on suspicion of involvement in the murder of a secular blogger earlier this year.

Individuals on the new list have told the Guardian they intend to keep writing and blogging.

“Our weapon is [the] pen, and we can use it without hurting anybody. We just want to make people conscious about their rights. So that nobody can use them to fulfill bad intentions,” said Ananya Azad, a Bangladeshi blogger who has been forced into exile in Europe and is on the list.

Here in the United States, we often take our First Amendment rights for granted. This story is a good reminder of why we shouldn’t and how important they are.

Featured image is a screen cap from CNN.

We take those, and many other rights, so much for granted that we continue to import millions of Muslims who do not believe in those rights at all.

Bangladesh has seen the bloody murder (remember when that was an exaggeration for yelling?) of several bloggers already. Publishing a hit list is merely the next step.

The bloggers should hire some Gurkhas to take it right back to the Islamist pukes.

Strong horses and all that…

This was Pamela Geller’s point when she organized the “Draw Muhammad” contest. It’s impossible not to offend Muslims. They are perpetually offended, or rather can be if they know the slightest bit about what Islam actually teaches about what they are supposed to take offense to. Fortunately most Muslims in the west and in America in particular know very little about what their religion teaches.

But that can change, and usually does when a Muslim population reaches a certain critical mass. Just ask the Hindus in India. Then the list of offensive items that you must not say grows to be endless.

Works both ways. We have drones, they don’t.

But then, we have a traitor for a president.