This may be Hillary’s only real “achievement” 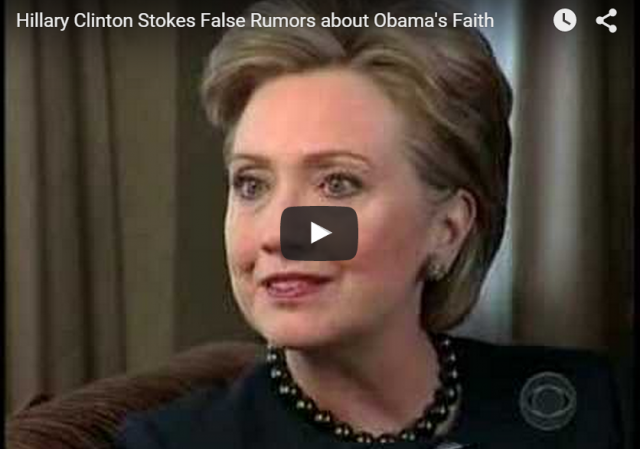 At a large Donald Trump event yesterday, someone in the crowd asked a question which accused Barack Obama of being Muslim and complained about Muslims. Trump appeared to brush off the question mid-stream, but didn’t denounce the claims, and was vague enough in his response to set the media on fire: 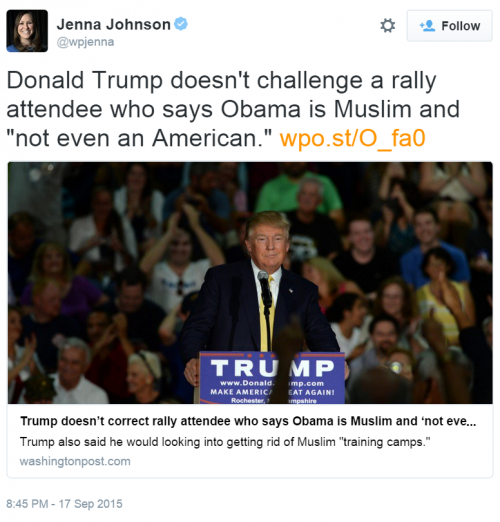 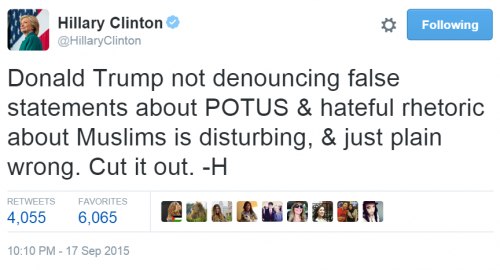 That’s mighty rich of Hillary, considering it was her campaign which started both the “Obama is Muslim” and not born in the U.S. claims and pushed them into the public consciousness during the 2008 primary campaign against Obama.

“The Internet” was quick to remind Hillary that she started it:

How come people weren’t this outraged over the use of the phrase “teabaggers?”

T-rump didn’t sufficiently jump up and down on a guy at a town-hall type event to keep the Mushroom Media away from their PC fainting couch, and Hellary did what you’d expect the poor, lying Collectivist to do; capitalize on it in the most flagrant, hypocritical way possible.

So this is really a “nothing-berger” all around.

It is impossible for Trump to have a ‘Correct’ response to such a comment, or at least according to the yardstick used by the MSM. If he had walked down into the audience with a stick and beaten the guy, the MSM would be all aghast about how Trump does not respect the guys civil rights, and if he does anything short of that, they get to cluck and cackle about how his supporters are all sexist/racist/homophobic/facist/loons.

T-rump could have answered the predicate of the question in true Trumpian fashion, and been perfectly fine.

“Listen, I don’t know the President’s heart. He’s a beautiful human being. A wonderful guy. I have no idea what he believes, but I’ll take him at his word. He’s a wonderful family man. Has a beautiful, fabulous family. But going on to your point camps in America…”

Or, he could have said, ” I don’t know obama’s religion, I just know he is the worst president in history”.

Was it Hillary who went on ABC in 2008 and referred to “my Muslim faith”? No, it was Obama.

Was it Hillary who boasted in 2008 of having grown up in a Muslim country, having had a Muslim step-father, and thinking the Muslim call to prayer is “the most beautiful sound on earth.”? No, it was Obama.

Was it Hillary who joined a “Christian” Chicago church that openly invites Muslims to join, and preaches hatred of white America? No, it was Obama.

Was it Hillary who wrote in Obama’s book that he would “side with the Muslims” in a clash of cultures? No, it was Obama.

If Americans are confused about whether or not Obama is a Muslim, it seems they are not the only ones who are confused. And that’s on Obama, not Hillary.

Mr. Obama spent much of his youth in Hawaii under the sometime tutelage of Frank Marshall Davis, who was a Communist Party USA (CPUSA) propagandist. I’m sure by the time Mr. Davis was done, Mr. Obama didn’t have any real religion left in him.
Obama, like any good Marxist, believes that religion is an is the opiate of the masses. He “wears” the trappings of religion like most folks wear a suit coat .. he puts on one when it seems appropriate. Sometimes, he wears Christian .. other times Muslim .. but underneath he really doesn’t believe in any of them; they are merely for appearance .. to dispense a dose of the opiate to the masses.

Obama created the misinformation that started the entire “birther” thing. Yeah, the Hillary campaign did pass it along, but It seems pretty obvious that not only did Obama’s publicist but Obama, himself, probably used his faux Kenyan birth to further his fortunes while in college (all of that stuff is locked away, of course).

The irony of all ironies is that Obama’s opponents ended up picking up his lies, mostly because they were so convenient, only to make themselves look silly. No wonder Obama let the “birther” lies go on so long before releasing his Hawaiian birth certificate.

I recall reading that like a lot of secular socialists in post WWII America, an era when the vast majority of people belonged to a church, the Dunhams professed to be Unitarians.

I see a lot of Unitarian influence in Obam’s attitude towards religion. The Unitarians tend to celebrate the holidays of all religions even as they believe in the validity of none. They also prattle on about their unique spiritual journey towards anywhere but here. Since they lack a creed, this journey has no point other than the attainment of a feeling of smug superiority towards those who do profess to a fixed set of beliefs.

“The Unitarians tend to celebrate the holidays of all religions even as they believe in the validity of none. They also prattle on about their unique spiritual journey towards anywhere but here. Since they lack a creed, this journey has no point other than the attainment of a feeling of smug superiority towards those who do profess to a fixed set of beliefs.”

That right ‘ere ^ is poetry.

“The Internet” was quick to remind Hillary that she started it

Instant fact-checking… I love it! Let’s all take a moment here to thank Al Gore once again for having invented the Internet. 😉

But why would libtards get their britches in a knot over Obama being a Muslim? According to the Left, Muslims are *waaaaay* cooler than Christians, anyhow ~

I thought that was Stephanopoulis’ job.

If it looks like a duck, etc. then it’s a duck. When you think your job is to make sure no one speaks against the “prophet” of Islam, then you’re a Muslim. A Jew or a Christian understands liberty because that value is the bedrock of the faith. Besides, Obama is deporting Christians persecuted by ISIS back to the lands from which they come and where they will be killed. That is not the action of a Christian. Where is the human feeling that is part of Judaeo-Christianity? It is absent in Islam and we do not see it reflected in Obama. We consistently see Obama reflecting a lot of Islamic attitudes to Jews and Christians. What, then, must one conclude but that he is a Muslim, given the propensity of Muslims to lie about things to advance an Islamic agenda? Who can disagree that the islamic agenda of the caliphate has been much advanced, even realized?

Besides, it is not Trump’s business as candidate to defend Obama in any way or form.

I was going to say that at least Trump takes questions from the floor and not staged questions like many democrats, if they even take questions.

But then, was this a set up question – it is certainly keeping him in the news cycle. If he had stopped the question and said something about the birthism/religion thing, then everyone will dig up the old Trump quotes. BY letting the guy slide a bit, he looks nuttier than Trump and gives him a way to say that he has evolved from past statements. Sound familiar?

This is a condition wherein a politician’s campaign personality is fragmented into two or more distinct campaigns.

I am *shocked* that people still believe Obama is Christian. I suspect that Clinton is also an apostate who left the faith and adopted a pro-planning doctrine.

The real shame of it all is that people who need to know what a phony Hillary is do not read blogs like this one. Political machines know that, so Hillary and others say whatever they want to figuring odds are in their favor. It’s the MSM that make a difference. For example, Hillary’s e-mail scandal could not be hidden and that is making a difference in her poll numbers. If the MSM hides the facts, she wins.

Given that she has had two dozen years on the national scene, the only people who don’t know Hillary is a phony aren’t likely to learn it no matter what they read.

I am shocked and appalled at how Bernie Sanders did NOTHING to quell the disorderly conduct speeches of the blacklivesmatter activists at his rally. He has a responsibility!

One’s obligation to punish speech only applies to speech that can be construed to be derogatory to non-Whites or non-Christians. Thus, #BLM’s antics are acceptable.

Was the long form Birth Certificate ever really investigated and confirmed or debunked? The last I ever read about it years ago was that it was clearly produced by Photoshop and contained myriad inaccuracies for something purportedly produced 50 years ago. My question: Has this subject been settled, and where can I find up to date information on the settled argument?