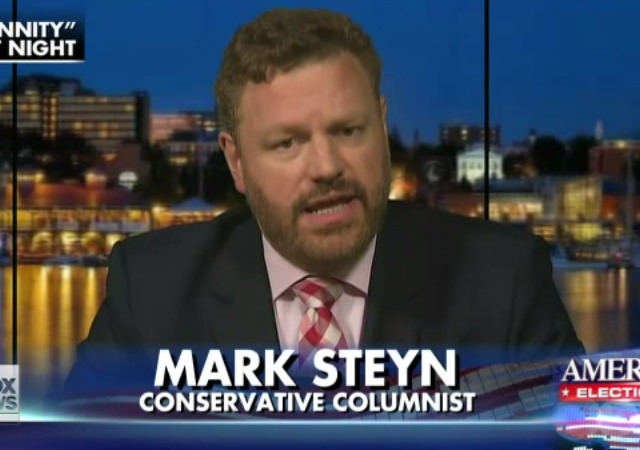 When it comes to Hillary Clinton’s 2016 presidential campaign, it’s like we’re watching a replay of what happened in 2008.

In 2008, Hillary Clinton was the presumptive Democrat nominee until the party’s base cast her aside for a little known senator who was seen as an outsider with a more progressive resume.

In 2016, the same scenario is playing out in the popularity of Bernie Sanders.

In 2008, Hillary seemed too focus-grouped and stale. Now, we’re being told in advance that Hillary is going to be more spontaneous.

Conservative author and columnist Mark Steyn made the same point on Hannity last night, saying that she’s tone deaf and that she is once again defeating herself:

Mark Steyn said on “Hannity” tonight that Hillary Clinton’s “train wreck” presidential campaign is in trouble, and there is no doubt that she committed a crime with her private server and email.

“In 2008, the Democrats were told, ‘Hillary is the heir presumptive. Let her get on with it and win the nomination.’ And she loused it up. She defeated herself,” Steyn said. “This time round, Joe Biden was told again, ‘Hillary is the heir presumptive.’ And she’s loused it up again. And the fact is, neither he nor any other Democrat should just sit around just watching this slow-motion train wreck.”

Top advisers to Al Gore were so worried that he would come across as wooden in the 2000 presidential debates that they set up a training facility at an aquatic center in Florida featuring a replica stage at a cost of $400,000.

This year Hillary Clinton’s advisers have embarked on a subtler strategy for fine-tuning the presidential candidate, according to a New York Times report published Tuesday. The plan amounts to a blueprint for spontaneity, to include more self-effacing humor, more empathy and more backyard parties.

Even top Democratic operatives chuckled publicly at the report.

I think Twitter is broken. Is anyone else getting Tweets from 2007? https://t.co/OYMOCWUcrZ

You mean Hillary’s appearing on Ellen and pretending to club dance isn’t spontaneous enough? She is basically not a charming or genuine person. Compare how she acts versus how Laura Bush acts. ‘nuf said.

She is not a likable person.

The Democrats are stuck at an awkward place: if they try to force Clinton through they risk having an unappealing candidate, while if they support other candidates they risk revealing how dissatisfied they are with their nominee after Clinton does win.

Given the high level of commitment that has already been made to Clinton in the Democtratic party (nearly three times as many endorsements as she had at the same point 2008) I think that she is almost certainly going to be the nominee. Nevertheless, getting to that point is making the Democratic party look dysfunctional, and make Clinton look distasteful. And, it will be hard for them to regain enthusiasm for their damaged candidate for the Presidential election.

a blueprint for spontaneity

What a concept! Planned and guided spontaneity. Outstanding!

Now where would the Party be if it didn’t have a Central Committee to come up with brilliant concepts like that?

“planned spontaneity” is enforced by the standard operating procedure “beatings will continue until morale improves”.

She can have no handlers or a thousand handlers of top caliber, she is still a wooden, vicious, unctuous, harpy with no natural affection for anyone who can’t do anything for her. I can’t imagine she even really likes Huma or Sidney and Bill has only ever been a means to an end. If they ever became useless to her, she’d flush them right away. If she goes down to defeat either in the Primary or General election, I imagine that most of society would just forget them and let them head into history. The Crime Family Foundation would wither and die and no one would even pay $1000 for either one to give a speech. Just the thought that she, one day, might be POTUS kept money flowing to the Family. Without that influence, it will just go away. I look forward to the day when it will have been six months or so since I heard either Clinton name mentioned except maybe in the Enquirer.

“I look forward to the day when it will have been six months or so since I heard either Clinton name mentioned except maybe in the Enquirer.”

I look forwards to the day she is sentenced to life in prison for betraying our country by mishandling classified information in an orange pantsuit.

Steyn nails it. As he so often does.

It is like the old saying of ” Put lipstick on a Pig,” ” It is still a PIG.” The hate & distain that she has for people who can’t contribute large sums to her ” Foundation,” she considers them ” Peons.”

Except for O’Malley, all the Democrats are over 60
Most are older than Reagan when he first ran

The old bag is definitely running true to form. But it will take a faux messiah on Obama’s level to knock her off her perch, I think.

For those who don’t know, SMOD is the Sweet Meteor Of Death.