UPDATE: Russians tried to hack into her home-brewed server 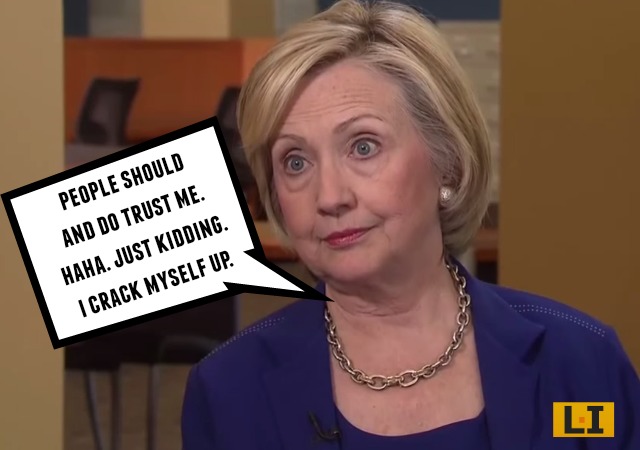 According to the Washington Times, more than 5% of Clinton’s emails in Wednesday’s batch contained classified information, twice as much classified material of previous batches.

…there are at least 400 messages that contain information the government now deems classified, out of nearly 12,000 emails released so far.

But 214 of those messages came in the latest batch of 3,869 messages, for a classification rate of 5.5 percent.

None of the messages were marked classified at the time they were sent — usually in 2010 or 2011, for the latest batch — but the government has gone back and determined they contain information that shouldn’t be out in public.

National Review reports that despite her current stance on LGBT rights, Mrs. Clinton was upset about a State Department decision in 2011 to use begin using more inclusive language. Clinton circa 2011 wanted to “retain the presumption of mother and father.”

An e-mail included in the latest tranche of Clinton documents released by the State Department on Wednesday shows the then-secretary of state exploding at her staff over plans to replace “Mother” and “Father” with “Parent One” and “Parent Two” on passport application forms, complaining about the decision and refusing to defend it in the face of partisan opposition.

Clinton learned about the change through a January 7, 2011 article in The Washington Post. But the policy shift was first announced in a December 2010 press release from the State Department. “These improvements are being made to provide a gender-neutral description of a child’s parents and in recognition of different types of families,” the statement read.

The next day, Clinton sent an early-morning e-mail excoriating top aides Cheryl Mills and Jake Sullivan for the secretive policy shift. “I’m not defending that decision, which I disagree w and knew nothing about, in front of this Congress,” she wrote. “I could live w letting people in nontraditional families choose another descriptor so long as we retained the presumption of mother and father. We need to address this today or we will be facing a huge Fox-generated media storm led by [Sarah] Palin et al.”

Hillary fighting with White House operator who “doesn't believe I am who I say” might be best Hillary email ever pic.twitter.com/D1CUa1Xf9N

Question is, as always – what difference at this point does it make?! Will she be held accountable for breaking the law?!

“I’m not defending that decision, which I disagree w and knew nothing about, in front of this Congress,” she wrote. “I could live w letting people in nontraditional families choose another descriptor so long as we retained the presumption of mother and father. We need to address this today or we will be facing a huge Fox-generated media storm led by [Sarah] Palin et al.”

Nothing whatsoever political about any of that…

I’ve said it before, I’ll say it again – If and when Hillary ordered the contents of her server deleted or wiped, she may have been destroying evidence of attempts by foreign intelligence agencies to access classified State Dept. data. Still wondering if such (attempted) destruction of evidence is a crime.

Forgive me for being sceptical, but This is the Secretary of State. Only 400 Top Secret, Secret, Confidential and NOFORN in 12,000 e-mails?

Remember these are mixed in with her personal stuff, love letters to Huma, bitching at Bill, telling her aide to make her tea or bring her, her dinner. I doubt there’s that few classified documents on the other hand there is probably a metric ass-load of other junk too.

Will Hillary! be held accountable for breaking the law? Of course not. In a banana republic the laws are only for the proles.

Get used to saying “President Hillary!” since I don’t see how any non-Democrat can overcome the combination of media bias, voting fraud and toxic identity politics that dominate our political system. It does not matter how bad the email scandal gets or how many laws Hillary! broke if millions will vote for her strictly because she has a vagina. Call me a cynic, but I think Mark Steyn best described the present state of America when he said that sometimes societies become too stupid to survive.

Note that AP is an anchor in the Democrat Party propaganda wing. Note further that the AP reports the Soviets made five attempts to hack Hillary’s server. It would be just like the AP to neglect to mention that the Soviet attempts ended at five because they finally succeeded.

I like that. Only five and I am sure the crack team that set the server up next to a commode was able to detect and thwart the Russian dastardly plot.

If the government of Russia tried to hack it they did. You have to seriously protect the building or at least the room from certain (classified) measures of infiltration to truly protect a server from any major government backed hacking.

Since I am assuming the bathroom in this dude’s house didn’t include that kind of protection literally any government except possibly Uruguay and Papua New Guinea could get into her stuff in a matter of hours if not minutes.

But again ‘What does it matter?’. The Clintons have been wholly owned by the Chinese for decades due to their funding and literally (and illegally) scratched through the classified markings on TS nuclear material and handed it to the Chinese delegates.

If the Russians didn’t hack the Chinese were certainly given it.

Spam level clickbait that Hillary may have clicked on.

Seriously, it may lead to Russia, but it might not be the KGB’s hackers in this case…

Well, since we know that amateur hackers knew about St. Hillary’s private server and used crude techniques to try to hack it, doesn’t the likelihood that the *experts* knew about it and successfully hacked it approach 100%?

These reported attempts were crude SPAM emails. They mean nothing unless she was stupid enough to click on them.

The much more dangerous hack is the one you do not see without high level security scans. Given the high value of the intelligence and the ease of access – it was most certainly there.

And the sixth time the Russians were successful.

This is nice, but it misses the elephant in the room …

These emails, traveling unencrypted through multiple email servers, have probably left a trail of unencrypted classified email in the logs of all of these servers. It seems that even Sen Leahy (D-Vermont) understood this back in 2007.

I like that. Leaky Leahy gets it better than the SoS.

Some commenters have mentioned that some of the material was merely embarrassing to Clinton or the US for that matter. That is NOT a legal reason to classify material.

The law clearly states that you cannot classify material simply because it is embarrassing. So whether or not it is embarrassing to Mrs Clinton, Huma or the State Department it doesn’t matter or if it was personal, she was the idiot who decided to use that email and server for the wrong reasons and the wrong way and because of her position everyone should be able to see the unclassified portions to be sure they are truly ‘unclassified’.

We don’t believe you are who you say you are either.

The evidence that some party or parties tried to hack her server was revealed in released emails. The real evidence of hacking will be revealed by the forensic investigation by the FBI but is very unlikely to be released to the public although no one needs to know more than the public.Talk about closing the barn door after the horses are stolen.