“It is a disgrace for this administration to abandon Americans in Iranian hellholes.” 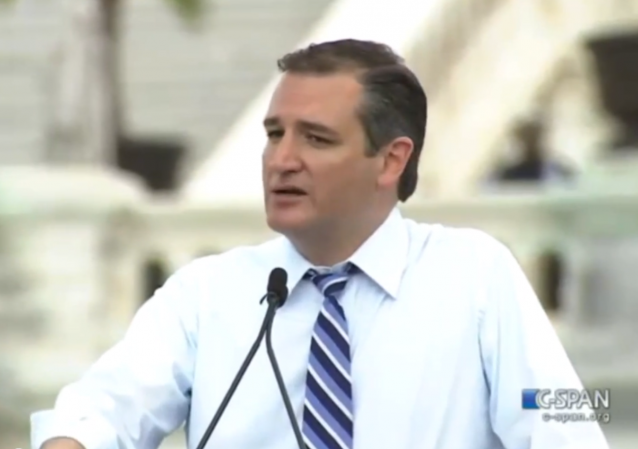 Cruz’s fiery speech outlined the consequences of the passage of the Iran Nuclear Deal. The Obama administration would be, “quite literally the world’s biggest financier of Islamic terrorism,” said Cruz.

His full speech from the rally is here:

Internet reaction to his speech was varied:

Cruz is doing that thing where he makes promises on behalf of other people and then gets mad at them. Adorbs. https://t.co/qwiDHTFwWX

.@TedCruz on #IranDeal: It is a disgrace for this administration to abandon Americans in Iranian hellholes. pic.twitter.com/QVhzg0d7l9

I thought it was illegal immigration. https://t.co/oDWRo8NTo4

Our own Amy Miller attended the rally:

"It is a disgrace for this administration to abandon Americans in Iranian hellholes." Cruz not holding back on the hostages.

"Rip to shreds this catastrophic deal." @tedcruz is on fire—big focus on preventing Iran from getting the bomb

Leading LI embedded tweet in the article by McCormack jabbing at Cruz and, on his twitter feed, jabbing at Trump. Waiting for that Establishment hack to jab Sarah Palin next…

Thanks for the coverage, ladies.

Maybe we can get more later?

There was a time, not so long ago, when this event would have been live tweeted & offering streaming live video feed by LI.

No worries… I’m watching live tweeting elsewhere & learned some male protester was dragged off by police for going after Sarah Palin where she was speaking at the podum, photos and all.

To think this president couldn’t even demand the release of American hostages in Iran. Pathetic in the extreme.

BarackHUSSEINObama’s behavior consistently defiles the office of President of the United States.

But, since we’re no longer a nation of laws ‘what difference does it make’?

Are they black drug dealers?

I stand with Ted.

I Do Too. RINOs Are CRUZin’ For A BRUZin’

The bomb is the issue.

When an atomic bomb in a cargo container blows up in Long Island sound, no one will care about a handful of people in jail in Iran.

I wish our candidates would stop harping on peripheral issues.

Iran is close to getting an atomic bomb.
Iran’s foundational myth is of the plucky college students bringing the decadent Super Power to its knees.
If they get the bomb, they will use it.

Quit firing all our ammo at those windmills — there’s a real giant right over there.

Cruz is unimaginative.. just like the shutdown. Pretend the problem is R’s. Lie about stopping something. Claim betrayed when lose. Raise $”

I wonder if Obama secretly hopes that Iran and perhaps Russia will fix what he broke. Begging is unbecoming a man of his stature.

Good for Cruz & Trump — and where were the rest of the Republican candidates?

Why would they take part in meaningless grandstanding?

“Why would they take part in meaningless grandstanding?”

Simple, That is all they ever do.

Which does not mean I agree with your assessment about the rally.

There were no other candidates in attendance because reportedly, Cruz would not respond to their requests to join. http://www.nationalreview.com/article/423330/cruz-may-reject-rivals-requests-join-trump-iran-deal-rally-joel-gehrke

I’m sure all the R candidates for POTUS were there.

Well damn, only two, Cruz and Trump. What a surprise.

I’m sure there must have been many R senators and reps there, but I cannot find a single name mentioned. Must just be a bad hair day or sumpin…

Since this is the new direction of LI, I will delete my LI RSS feed and let the RINO swamp creatures have at it in peace.

If you want to contact me, Professor Jacobson, the only way is DM via Twitter. I dont do email. I love you like my own, dear. We’ve fought many political battles together. sad…

Still one of the best conservative blogs around. Stick around and have fun is what I intend to do. You gotta admit watching some folks froth at the mouth is entertaining, especially when they loftily make laughable pronouncements and predictions.

Either way, keep a smile in your heart and a song on your lips as you’re smashing the establishment 🙂

“Since this is the new direction of LI…”

What the f**k are you talking about?

word of the day:
http://www.urbandictionary.com/define.php?term=Flounce

I’m looking the field and liking Cruz more and more.

He is well positioned to take over Trump’s supporters when he flames out, a growing likelihood if he offers up more quotes like he did yesterday when someone complimented him on one of his daughters. Trump acknowledged her beauty and said (paraphrased), ‘if I wasn’t married and you know, her father…’ This is very creepy stuff coming from anyone let alone a presidential candidate. It will cost him and since Trump cannot control his mouth for long, it’ll happen again. And again.

Ever the contrarian (me), every time trump says something considered “creepy”, “silly”, or “mean”, he rises in the polls. Why? A few more people recognize he is not PC and doesn’t give a damn what the PC people think, my opinion anyway.

This will not hurt at all…

Well, he called that lady ugly, and this guy stupid, and that guy dumb, and yes, those things haven’t hurt him, but this is entirely different. Trump verbally, out loud, in public, agreed that his daughter was hot and he’d do her if he wasn’t married and wasn’t her father. I mean, that’s just awful, a truly sick thing to say, and not because I have so many daughters. It’s a whole different category than PC, speaking to poor character, sick character, impulsiveness, judgment problems, etc. If/when it gets promoted, it will hurt his female support at the very least.

Trump is incapable of keeping his mouth shut. More stuff like this – and worse – is coming, and the soundbites will end up in anti-Trump ads soon enough.

Are there any female Trump supporters reading this thread that could comment on how this Trump quote sits with them? Ain’t looking to set you up for a barking, but I am curious as to how any wife or mother could tolerate such a sick and ugly thing as Trump said about his own daughter.

The actual quote, from an interview done by Paul Solotaroff, who is the ‘I’ in the cite below, while Ivanka is Trump’s daughter.

After I met Ivanka and praised her to her father, he said, “Yeah, she’s really something, and what a beauty, that one. If I weren’t happily married and, ya know, her father . . . ”

I mean, c’mon, lol, that is sick. That is not presidential material.

…AND…as has happened enough times to make it a character trait…T-rump LIED about saying what he DID say.

Which blows the “he’s not PC” bullshit out the ol’ crapper.