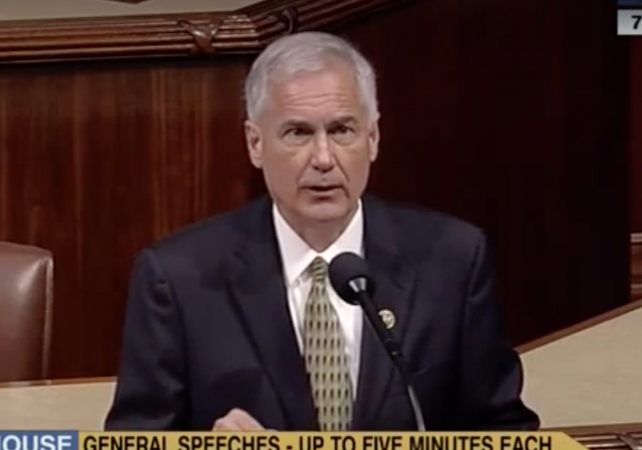 Formed earlier this year, the HFC hoped to pull the House Republican Caucus further to the right. There principles were simple. “First, rank-and-file Republicans must pressure leadership to enact a more conservative agenda. And second, this pressure should never involve frantic scurrying on the House floor,” wrote NRO‘s Joel Gehrke in January.

As a caucus devoted to moving leadership’s agenda to the right, the group has a chance to take over the traditional role of the Republican Study Committee, which many lawmakers believe has strayed from its founding mission as an organization designed to pressure moderate GOP leaders to adopt more conservative positions. National Journal first reported that such a group was forming.

Less than a year after it began, the HFC has already lost one of its 30 members. Rep. McClintock’s resignation was brutal. “I believe the tactics the HFC has employed have repeatedly undermined the House’s ability to advance them,” he wrote.

When the House Freedom Caucus formed in January, I fervently hoped that it would provide responsible and effective leadership to advance conservative principles in the House of Representatives.

I know that every member of the HFC sincerely supports these principles, but as I have expressed on many occasions during our meetings, I believe the tactics the HFC has employed have repeatedly undermined the House’s ability to advance them. Allow me to review a few examples.

On February 27th, we faced the imminent shutdown of the Department of Homeland Security over the funding of Obama’s unlawful amnesty orders for illegal immigrants. Although the American people overwhelmingly opposed these orders, they also overwhelmingly opposed shutting down DHS. House Republicans attempted to pass a three-week stop gap bill so we could avoid a catastrophic shutdown of our security agencies while continuing to bring public opinion to bear to de-fund the orders. At the behest of its board, most HFC members combined with House Democrats to defeat this effort, resulting in the full funding of these illegal orders for the fiscal year.

In May, the House had the opportunity to adopt the most important free trade bill in nearly two decades, restoring the long-standing and essential process that has made it possible for our nation to negotiate free trade agreements with other nations. At the behest of its board, most HFC members combined with the vast majority of House Democrats in an unsuccessful attempt to defeat this legislation.

I have strongly opposed the public funding of abortions throughout my 29 years in public office, but this tactic promises only to shield Senate Democrats from their responsibility for a government shutdown and to alienate the public from the pro-life cause at precisely the time when undercover videos of Planned Parenthood’s barbaric practices are turning public opinion in our favor. I suspect this is why the leading pro-life organizations have been conspicuously unwilling to endorse the HFC position.

A common theme through each of these incidents is a willingness – indeed, an eagerness – to strip the House Republican majority of its ability to set the House agenda by combining with House Democrats on procedural motions. As a result, it has thwarted vital conservative policy objectives and unwittingly become Nancy Pelosi’s tactical ally.

I feel honored to know and work with every member of the House Freedom Caucus. I have never served with a group of patriots more devoted to our country and dedicated to restoring American founding principles. However, I feel that the HFC’s many missteps have made it counterproductive to its stated goals and I no longer wish to be associated with it.

I have never served with a group of patriots more devoted to our country and dedicated to restoring American founding principles.

Really? They seem to have a strange way of going about it.

There is something about having power paid for by us anonymous taxpayers that seems to corrupt virtually everyone in D.C., including supposed conservatives. That, or they are all demented, narcissistic sociopaths with tyrant tendencies to begin with. I remember not so long ago the Republican Study Committee was excellent. They spoke to us at the Armory a day or two before the 9/12 March to the Capitol in 2009.

I don’t think the House Freedom Caucus is corrupted, far from it. IMO both McClintock and the HFC are acting in what they feel is the best interests of the nation. He’s disagreeing with *tactics* and, because those tactics don’t achieve anything close to success but instead work to help the opposition, he is withdrawing his support of the leadership promoting them.
I have been saying basically the same thing for years now. I hope more conservatives join McClintock’s protest and leaders in the conservative movement wake up, stop trying to wrest control over elected leadership and start working with them instead of the Democrats.

The House Freedom Caucus are precisely the people you are constantly applauding, when they stick it to Boehner. McClintock points out that all they achieve with their tactics, beside feeling good about themselves, is to help Pelosi.

The ‘Ican Party is irreparably broken and needs to follow the Whig Party into the ash bin of history.

Tom McClintock is one of the most underappreciated members of Congress. He’s one of the greats and in a just world he would be a Senator and in the presidential field in 2020 or 2024.