There but for fortune, could go you or I.

Mary Katharine Ham’s husband Jake Brewer was killed over the weekend during a long-distance cycling ride as part of the Ride to Conquer Cancer, when he lost control of his bike and crashed into a car.

When I heard the news my thoughts after the enormity of the loss were that it could have been me. In my prior life, I did many triathlons and long training sessions. My wife always worried about the swim, but I knew that was the easy and safe part. I feared the bike portion, and the long-distance bike training rides. A small road fissure, momentary lack of attention, or distracted driver was all it would take.

Brewer was a White House science policy aide. Ed Morrissey at Hot Air has the details, as well as a link to the fundraising effort for their child and unborn child.

Mary Katharine is pregnant, and according to the Washington Post, Jake mistakenly learned the sex of their unborn child, something Mary Katharine doesn’t even know yet (via @JimmyPrinceton): 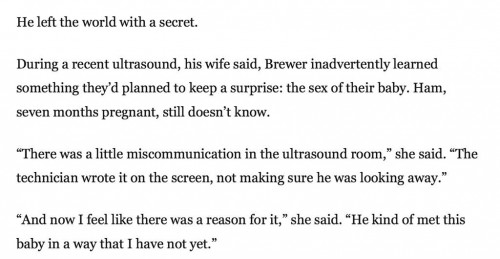 There never are words sufficient for such occasions.

What a tragedy for her and her family. God bless them.
MKH’s pieces were uplifting and lighter than the usual political fare. I hope that she will return when good for her.
A personal coincidence: About an hour after this news appeared on my computer screen I was finishing “The Secret History,” by Donna Tartt. Three pages from the end of that book appears: “She was christened Mary Katherine, a name which has fallen more and more into disuse . . . .”

Biking in and next to traffic just isn’t a good idea. Here where I live last year a woman had a tire blow while riding on should of busy rode (riding is very common on that road) it caused her to all over sideways, and she fell towards the road. A pickup truck pulling a trailer swerved to miss her but the trailer didn’t miss her sadly. She was killed. When I was a kid they didn’t allow bike riding in traffic like they do now. Back then people realized cars and bikes don’t mix.

I know you can be killed by a bad fall on a bike (which is why I always warn my kids that with bicycles and cars, “speed kills”), but I also always tell them it’s a bad idea to be on a bicycle sharing a road with cars.

Your life is dependent on too many drivers not swerving or being distracted.

I see people riding bicycles on busy streets with fast-moving traffic and I just think it’s a horrible idea.

I suggest we the comments focused where we ought, rather than on personal views and anecdotes regarding bike safety.

Good bless MKH and family. My heart truly breaks. They are in my prayers.

RIP. Jake spent much of his free time in charity rides across the country. Terrible, freak accident.

Thoughts and prayers for Mary Katherine and their family and friends.

We often forget our precious and fragile life is and how much the lives of others are gifts from God to our own souls.

May Jake RIP and may Mary be given the great strength she needs.

Prayers and deep sympathy for MKH and their children.

A terrible tragedy indeed. I hope his family and friends remember the pleasant times and somehow find comfort through the next awful weeks.

…Years. It leaves an empty space you never can re-fill.