CNBC debate rules could be bad news for some big names

CNBC debate rules could be bad news for some big names

Could Kasich, Huckabee, Christie, and Paul find themselves in the undercard debate? 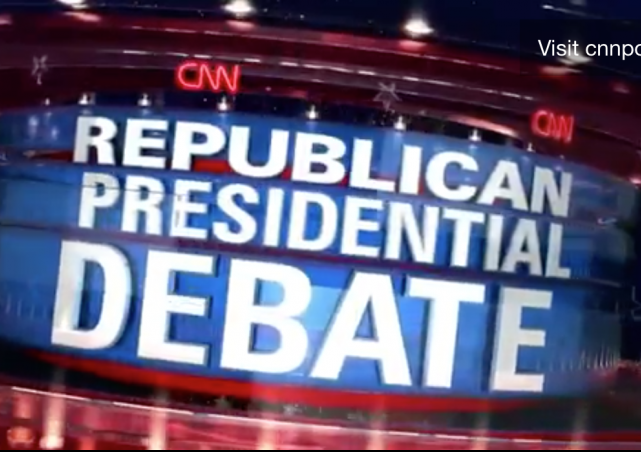 Republican Presidential candidates wanting a podium on the debate main stage will have to first qualify. CNBC set a 3% polling floor for the upcoming October 28th presidential debate.

There will be an undercard debate, but that too has a polling floor. To qualify for the kiddie table, candidates must have received at least 1% in any one national poll — no averages here.

Poll percentages taken from NBC, ABC, CBS, Fox, CNN and Bloomberg released in the five weeks leading up to the debate will be used to determine qualification.

Candidates who have an average of 3 percent in polls will be on the primetime, 8p.m. EDT debate stage, CNBC announced on Wednesday. A 2.5 percent average will be rounded up to 3 percent. All other candidates with at least a 1 percent in any poll will be invited to the undercard debate.

According to the most recent polling averages, the main debate stage would feature Donald Trump, Ben Carson, Carly Fiorina, Marco Rubio, Jeb Bush, Ted Cruz, John Kasich, Chris Christie, Mike Huckabee and Rand Paul, whose 2.75 average would be rounded up to 3. According to the most recent polls, the undercard debate stage if held today would feature Gov. Bobby Jindal, former Gov. George Pataki and former Sen. Rick Santorum, but neither Sen. Lindsey Graham nor former Gov. Jim Gilmore have hit 1 percent in one of the recognized polls.

In recent days several campaigns have lashed out at the RNC and expressed concern the RNC was trying to influence the networks to winnow the field through the debate criteria. In a letter sent this week to RNC Chairman Reince Priebus, the Graham campaign complained that the RNC was breaking their own rules by trying to shrink the candidate pool.

The debate will focus on the economy, jobs, and retirements and will be moderated by CNBC anchors John Harwood, Carl Quintanilla and Becky Quick.

Wednesday marked a vital fundraising deadline for many contenders in the bottom rung of the GOP field. Though no one is willing to concede they’re considering dropping out of the heated primary pack, the finally fundraising tallies may very well result in smaller field.

They’re ALL 2nd tier at this point. They should, IMHO, save their money and drop out.

Could we adopt the convention when speaking about these press extravaganzas that we refer to them as “debates” in quotes?

Words mean things, and some of us like words so much we don’t like to see them tortured.

About friggin’ time! There should only be 6 people max at the adult table.

I logged in for the simple purpose to +1 DINORightMarie, Ragspierre, and to ask: who’s the first Irishman to come out after St. Patrick’s day? Answer: Paddy O’ Furniture.

Kidding aside, astute comments all, but I’ll say this: the Republican Primary process is a Republican Party matter and shouldn’t be guided by left wing media outlets nor their polls.

Freedom dictates that there should be as many candidates as want to run. Period.

The number ought not be dictated by media corporations with stage design, program planning problems, and commercials to schedule. Having said that, the problem belongs to whatever political party allows the media to dictate, the GOP in this case.

How do you propose to tell CNN or Fox or NBC how they will conduct their debates?

RNC has no control over networks OR candidates (none of whom will turn down a free forum with potentially millions of viewers, you can’t buy that kind of advertising. Media may give it to you free as they do to promote Trump, but you can’t buy it).

The arrangement to reduce the number from the last cycle is purely voluntary. Interesting to see how RNC enforces anything on anybody.

Or is this just more “I don’t like the outcome, blame the GOP Establishment” stuff?

Republicans…hell, conservatives…need to put on their own debates SANS the networks.

Then they can make them available (maybe to the highest bidder for first publication) to the news outfits.

You nailed it. These are not debates in any sense of the word. How can 10 or 11 people have a debate amongst themselves? Not possible. Add lights, cameras and maybe even a jet plane, what do you end up with? Just another reality show.

Does somebody have an animated gif of little baby Graham crying and kicking his feet. Could somebody close to him tell him America has zero interest in what the Barney Fife of the senate thinks about anything. Maybe he should just crawl back up McCains arse where he came from 10 years ago.

It is hard to get fired up about the second tier and the no tier, especially if Grahmnasty and Gilmore are in the latter.

What makes a “vital fundraising deadline”?

Is there some federal regulation involved or a price break for tv ad time that’s bought far enough in advance or something?

gulfbreeze explains the significance of the fundraising deadlines below.

There are typically no discounts for early ad buys, but all networks limit their total political advertising available: they have to keep their regular advertisers happy, too, and there needs to be a minimum amount of content. For most shows, the content is blocked in advance, so ads must fit around it.

Typically the limits only become significant as the election date approaches and the supply grows short.

The 9/30/15 “vital fundraising deadline” is the FEC quarterly deadline for which campaigns must report the total mounts of donations to their campaigns for the prior 3 months (reporting is due 15 days later). Presumably the quarterly fundraising number allows the candidate to tout their fundraising succes to big donors as a measure of how strong their campaign is, how well they are motivating their base of voter support, and therefor how worthy their campaign is of further financial support from those big donors.

And conversely, it serves a vital role in the ecosystem, like wolf packs, winnowing out the weak.

The question of how many candidates should be included in debates is a recent phenomenon. In days gone by, everyone knew no more than a scant handful of candidates could have a chance at a major nomination, usually no more than three truly viable and the rest trying to pump their resumes or book sales.

Carter changed all that in 1976, taking advantage of the anti-Washington mood to run an outsider campaign that went from “Jimmy who?” in late ’75 to “winning” the Iowa Caucus by finishing second to Uncommitted. Then Gary Hart came from nowhere in ’84 to grab frontrunner status for the next cycle, which he promptly trashed by infidelity.

Followed closely by Dukakis, who was on no one’s short list at the start, and then Clinton, who had been written off after his boring ’88 convention speech, surviving his own “bimbo eruptions.”

Of course, those are all Democrats. Republicans last picked a true Dark Horse with Wendell Wilkie, a former Democrat who lost badly. Every other nominee of the GOP since has been one of the top two or three expected to be contenders at the start.

We are the conservative party and don’t like surprises. So the question of cutting off the participants to the Top Six is really, by history, giving a lot of benefit to the 4th-6th candidates. There is a great, deep field but all of them knew how many others were likely to run, and that the field would likely winnow before any actual voting.

Why are Conservatives having their ” Debates,” in Enemy territory ? They ask the most questions of ” Their,” favorite Candidate. It is not a debate at all. There needs to be a pre-screening process, so that we might get to hear what the Candidates really think. The GOP needs to be broadcast in Friendly Territory.

I think that the GOP Leadership should hold the debates themselves and sell air time to which ever stations want to buy it. We need new leadership in the Republican National Committee. They don’t act like they are “Proactive.”