Security measures must remain in place 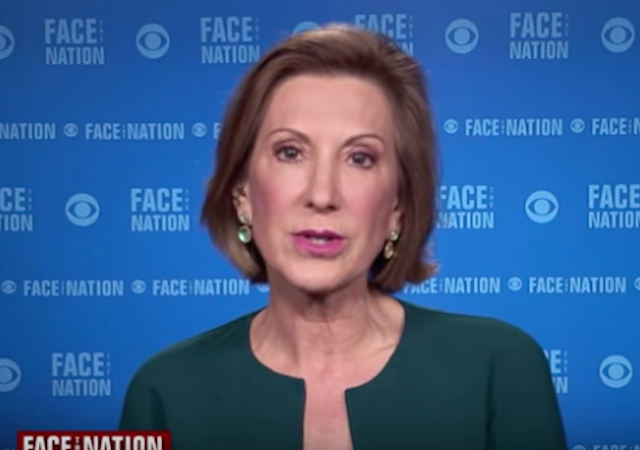 The 2016 Presidential candidates from both parties are giving only sporadic attention to the refugee crisis currently gripping most of Europe. Hillary Clinton has been relatively quiet, aside from comments stipulating a need for the “entire world” to play a part. Democrat hopeful Martin O’Malley has been a bit more vocal, asking for the United States to take in 65,000 refugees:

“I support the call from humanitarian and refugee organizations for the United States to accept at least 65,000 Syrian refugees next year,” he said in a statement Friday. “If Germany — a country with one-fourth our population — can accept 800,000 refugees this year, certainly we — the nation of immigrants and refugees — can do more.”

On the Republican side, Carly Fiorina has been out front on the issue. She was asked about the subject on Face The Nation and didn’t hold back:

Fiorina brings up an important point. As sad as it is to see what is happening, national security risks are in play; while it may seem “uncaring” to cut off the flow of refugees into the United States, there is evidence that not all of the refugees are Syrian:

Iraqis formed the largest number of people descending from buses in the upscale Turkish seaside town of Bodrum on Sunday to attempt the short but perilous sea crossing to Greece, where two-thirds of those seeking asylum in Europe have arrived this year.

A little more than half of the arrivals in Greece this year have been Syrians fleeing their country’s brutal and unending war — and by August the proportion of Syrians had climbed to 78 percent, according to the most recent figures provided by the U.N. High Commissioner for Refugees.

But the Syrians are being joined by Iraqis, as they, too, abandon hope that their country’s conflict will be resolved, said Mohammed Hamed, 33, an Iraqi policeman who left his wife and three children in the southern Iraqi city of Karbala three days ago.

Security measures need to remain in place because we cannot know for sure where those applying for refugee status are coming from:

A Pakistani identity card in the bushes, a Bangladeshi one in a cornfield. A torn Iraqi driver’s license bearing the photo of a man with a Saddam-style mustache, another one with a woman in a scarf displaying a shy smile.

Documents scattered only yards from Serbia’s border with Hungary provide evidence that many of the people flooding Europe to escape war or poverty are scrapping their true nationalities and likely assuming new ones, just as they enter the European Union (EU).

Pressure is going to build on the United States to allow more refugees. Carly Fiorina has weighed in and pretty soon, all of the candidates are going to get hit with questions about it.

It will be interesting to see what positions they take.

OMG – no one is allowed to comment on this blatant propaganda?

Is this Legal Insurrection? I’d just like to know how much she got paid?

I think you’re on the wrong thread. You can indeed comment on the Jeb Bush item, it’s just that no one has yet. Be the first! 🙂

Betty refers to another thread wherein the writer is trying to boost Jeb!, but the comment section is closed. I’ve seen this a couple times in my years here, and as far as I recall, it was always a simple oopsy buy someone behind the curtain, quickly fixed. I’ll hold my fire and wait and see. But, if it’s a genuine, intended refusal to accept comments on a rather gushing and sophomoric blurb for Jeb Bush, done without explanation, it will feel like I’ve been told to piss off. I’m pretty sure it’s just a whoopsy.

I run a firefox addon called NoScript which blocks Javascript.
When I first loaded the page, the no comment thing was up.
When I set allow Javascript on the page, and the page reloaded it looked like it would take cammoents.

My suspicion is that something is hinkey from a tech point of view.

Yeah she knows the economy and she knows technology. Let’s ask the people at HP who lost their jobs and the investors who saw HP stock nose-dive under her leader ship what they think about her ‘commander-in-chief’ talents.

JJ: Do you think any of the millions of federal government employees should lose their jobs?

Yeah of course.
Bloated agencies should be trimmed.
Unnecessary agencies should be chopped.
Problem is – who makes those decisions objectively, not on political agendas from the Right or Left, but by people who really understand the world as it is, and envision the future with some degree of expertise.

That’s why I favor Trump at present. I think he intuitively understands the interrelated mechanisms that exist between business and government better than anyone else running, Republican or Democrat. Again for the N-teenth time, I’m an Independent, looking for the best candidate with the best chance to accomplish what I think most important: Immigration and the Economy are at the top of my list. And those two issues are interrelated, as this shows:

698K Native-Born Americans Lost Their Jobs In August: Why This Suddenly Is The Most Important Jobs Chart

If Trump gets elected president (a long shot)I think he’d shrink the flow of Mexicans and other South American, both legal and illegal. He won’t be expelling the entire illegal immigrant population. But he will round up a significant number of mostly male criminal types, dump them outside our borders, and hopefully that will galvanize congress to fix the broken system. Because if Trump was elected President, the message to congress would be loud and clear.

Tom Perkins was a member of the Hewlett-Packard board that fired CEO Carly Fiorina in 2005, but he now calls that move a “mistake” and defended her actions in a full-page ad in The New York Times on Thursday.

If Carly wasn’t tough or crafty enough to deal with the dysfunctional Board of Directors at HP, why would anyone think she could deal with the far more dysfunctional world of domestic and international politics. I’m sure Putin and the Ayatollahs are shaking in their boots over a Carly Presidency.

And let’s not forget her previous health issues. Even in the LI brightened photo of her (the video provides a truer representation) she’s not looking healthy. Old Joe Biden looks more robust.

Virtually every technology stock on the planet nose-dived during her tenure as CEO at HP… remember the Dot Com Bubble?

As far as people losing their jobs… yeah, that tends to happen during massive mergers and acquisitions.

Our Federal Government would benefit greatly from a downsizing of about 50-75% or so… and I’m talking an actual budget reduction, not Government speak where they refer to a reduction in the baked-in budgetary growth rate.

“Virtually every technology stock on the planet nose-dived during her tenure as CEO at HP… remember the Dot Com Bubble?”

Yes Paul, tech stocks fell during the Dot Com Bubble, but HP stocks and company value plummeted. Like a Cross Country Race during an unexpected rainstorm, the speed of all the runners was slow at the finish; but HP under Carly finished near the bottom of the pack. During that recession the S&P 500 Information Technology Sector index dropped 15%; HP underperformed that, falling 65% during her reign, slicing shareholder wealth 52%.

Plus her decision making was disastrous (it’s well documented; I’m sure you know about the foolish Compaq acquisition). And yes, during mergers jobs are often lost, but 30,000 mostly high tech jobs as a result of poor decision making seem inexcusable. And with all those job reductions, and her supposed tech and business acumen, during her 5 years at HP the company profits remained flat – while S&P profits at similar enterprises went up about 75%.

Bottom line, she appears to be a suave talker but not a doer. Do you really want her as President of the U.S., Commander of The Armed Forces, and able to influence the economic future of our country?

“I’d just like to know how much she got paid?”

The author is a regular contributor, here. You admit that you are not. Are you being paid to troll?

A correction, Valerie: The author is a lightweight well known for writing silly posts and taking hits on them. The regularity of her contributions doesn’t affect the quality of her posts.

I’ve found them very responsive. Or you can kvetch…

I’ll give her this: she is an extremely articulate, understandable speaker. Answers questions without pausing or stuttering, no filler words, and concludes forcefully.

She wants Europeans to “step up” and absorb the migrants. Why would we do it to our friends and allies?

She’s an Islamist symp speaking out on the issue without asking the right questions. Unimpressed.

I don’t know if she’s an Islamist sympathizer, but I agree she’s not asking the right questions. I want to hear a spirited defense of Western civilization, but hear equivocations. If that’s how she rallies the base… well.

Why the hell should Europe accept any of them? There are vast empty regions in Africa and the middle east where the dollars could be better spent and more people helped.

These are pure economic invaders. Keep them closer to home so they can get back easier when the ‘temporary’ conditions that ‘forced’ them to leave change. Surely, no African or ME country is such a basket case that it is in a state of perpetual crisis?

The Gulf countries say they cannot take refugee b/c it is too expensive to stay there. (unless the refugees wish to indenture themselves as laborers.) The EU should in that case garish about E100,000,000/day from the gulf states to support the refugees they don’t want. This is the only way to impact these elite Arabs. (Remember the Kuwaiti anti-fracking ad saying if we cause the price of oil to fall it will hurt their lifestyle?) — their lifestyle needs to be impacted if they don’t want refugees.

Most of these “refugees” had no problem with the direction their country was taking, supporting terrorism and the like, until their country imploded because of the poor choices of its residents. Now these people want a do-over in the West.

I can’t believe that anyone rightward of the most bleeding-heart fringe of the most liberal political wing in the United States would think it is a good idea to let thousands of these people in. Most of these people are at best politically unfriendly to the US and at worst terrorists.

If these people were actually persecuted it would be a different story, but, as far as I’ve read, most of them just want to get away from a war brought about by themselves.

The author is a lightweight well known for writing silly posts and taking hits on them.

Are all 65K going to be staying at O’Malley’s?

Because NONE of those refugees EVER end anywhere near our beglittered pols.

ONE TERM LIMIT- ALL FED POSITIONS

There are glitches on this post; I “upvoted” several comments, but those comments are still at 0 votes. Of course when I try to upvote them again, I get “Already rated.”

So I’ll just content myself by saying, I agree with edgeofthesandbox: “I want to hear a spirited defense of Western civilization, but hear equivocations.”

Carly’s too establishment for me, though she does talk purty. So I’m still for Trump!