Buzz Around Biden Continues to Grow

Buzz Around Biden Continues to Grow 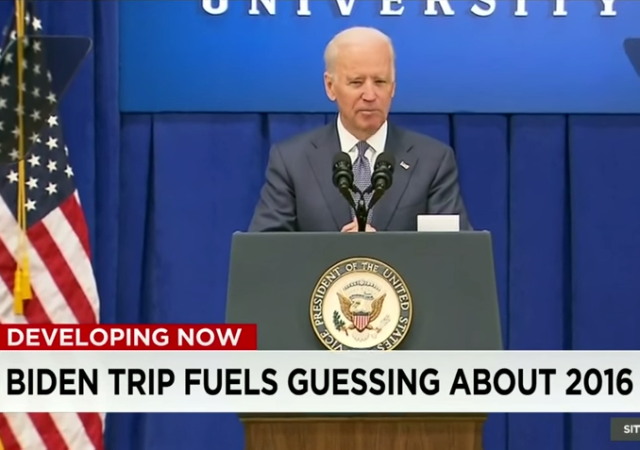 As Hillary Clinton continues to stumble over scandals and sink in the polls, speculation is growing around the possibility of a Joe Biden run for 2016. A trip to Florida by the VP this week is fueling the fire.

A speech. A party fundraiser. In Florida. Clinton? Sanders? No, Joe Biden.

Rarely has a speech on the importance of community colleges been more closely scrutinized.

That was the central theme of remarks delivered by Vice President Biden on Wednesday at one of the nation’s largest universities — at least, the stated theme. The other, which he only hinted at, was the political subtext: Still grieving from the death of his oldest son, Biden is weighing a presidential bid. And until he makes his 2016 decision, everything he says and does will be viewed through a campaign prism…

“Look at all the press you’ve attracted,” he joked to the crowd packed into a sweltering classroom at Miami Dade College. “Their interest in community colleges has impressed me. I hope that’s what they’re going to write about.”

The speech was the first stop on an itinerary that marks the vice president’s most active political trek since his son Beau Biden, the 46-year old former Delaware attorney general, died of brain cancer in May. Close friends and aides say the vice president is still undecided about making a late entrance into the Democratic race dominated by Hillary Rodham Clinton, who is slipping in polls, and Vermont Sen. Bernie Sanders, who is enjoying a summer surge.

A final decision isn’t expected until later this month, and family considerations — including whether they can sustain the demands of a grueling campaign — remain his most pressing concern, according to people familiar with his thinking.

Here’s a video report from CNN. Note that they mention Biden is going on the Late Show with Stephen Colbert next week. Some have speculated that Biden could announce during the show.

Of course, this report wouldn’t be complete if we didn’t check in on a certain Massachusetts senator. Boston.com reports:

Elizabeth Warren on Joe Biden meeting: ‘It was a long conversation’

During an interview at Suffolk University, Warren told The Boston Globe’s Joshua Miller that it was Biden who invited her down for lunch at his residence in Washington D.C.

According to the Massachusetts senator, the conversation ranged from policy to what’s happening to the middle class to the direction of the country.

“It was a long rambling policy conversation,” she said.

Miller then pressed if the vice president, even jokingly, asked about the possibility of Warren being his running mate—as Biden reportedly considers jumping into the 2016 presidential race.

“It was a long conversation.”

“Buzz Around Biden Continues to Grow”

Henry “Hawk” Hawkins should weigh in on this Buzz Biden business.

Where can he be? Maybe he fell off the edge of the earth or maybe he was swallowed by a sink hole.

Since I first predicted Biden would not only get in, but be the nominee, here the week of July 4th, more of my expert analysis:

Biden will likely NOT jump in too soon, but he will jet around talking to the donors. Most of Obama’s ’08 & ’12 bundlers have not yet committed this cycle. He doesn’t want to appear to be challenging Hillary (or Bill) and will not directly attack her under any circumstances. Part of his strategy will be to NOT anger and alienate her machine, which is notoriously vindictive and vengeful.

Building the support slowly, in the background but not silently so, allows Biden to time his entry for when the consensus in the Party is that Hillary has become too damaged to win and may hurt the down-ticket if she is the nominee. That’s his trigger.

Hillary may not have formally withdrawn by then, but the handwriting must be on the wall for Biden to move.

Buzz? Those are just the swarms of flies.

I think that is the BUZZsaw cutting the email server to which Hillary has tied herself.

The first smoke signals got blown away before she got to see’em.

Oh, gee, does this mean that Hillary is toast? Pity!

Funny about that. When the FBI wants something they know you are holding, they can be very convincing.

…And if the holder is in another country, laughing at the G-men? 😉

Hope the hacker kept a copy.

So that’s what I’ve been smelling!

Biden may or may not have offered Warren the VP slot, but I doubt it would be announced before the convention unless the race were very tight between him and Sanders, which seems unlikely. It’s more likely he was making sure she would not jump in herself. Again, I don’t think he jumps in until Hillary is clearly circling the drain and everyone knows it.

Warren could take the VP nod since she isn’t up for reelection until 2018 anyway (although I believe MA allows candidates to run for multiple offices).

Again, I don’t think he jumps in until Hillary is clearly circling the drain and everyone knows it.

I don’t think Hillary will have any bearing on Biden’s decision. If he decides to go for it, Obama will pull the plug on Hillary, and legal proceedings will be started within a week and Hillary will withdraw within two weeks. Clearing the way for…

After the buzz comes the maggots.