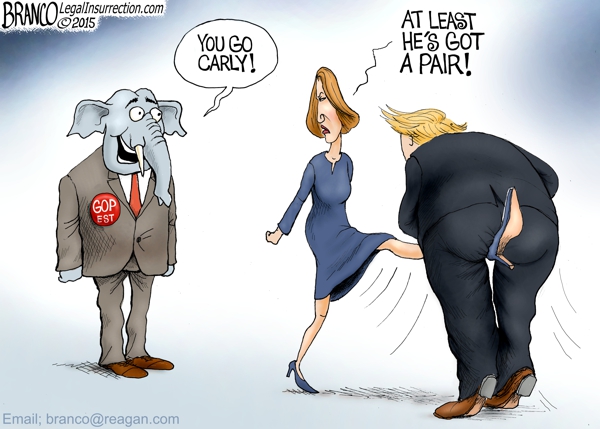 yeah, on her shoe!

Prepare to feel the wrath of the Trumpies, Branco. 🙂

Not really. A true Trumpie respects directness and efficiency, and Fiorina certainly exhibited both.

And who can argue with the concept that Trump and Fiorina boast cast-iron pairs – at least metaphorically – while the poor blob on the left of the cartoon might as well go full Bruce Jenner.

“They love me! let me tell ya”… It’s hard to do a Trump impersonation via text.

He’s gonna want an ice pack for that!

Most excellent, Mr. Branco. That’s exactly the way I see it!

Judging by the quantity and quality of Trump’s children, his economic success, and political acumen, I would say he has more than a mere pair.

That said, Fiorina for Secretary of Defense.

Hahahaha most excellent — cowardly Repub Establishment cheerleading from the side.

Only thing missing is the yuuuge CLANG when she makes contact.

…sez her ex-husband, and her current husband’s ex-wife. LOL.

The fact that the knives are now out for her like this tell me that The Powers That Be are taking her seriously as a threat. As Walter Olson remarked this morning, “Last night ‘she caused the fifth and final bankruptcy of Donald Trump.’ And today the Democratic side of my feed is full of oppo-research pieces going after her”

Yep! They always tell us who they fear!

Let’s hear about her big boat now… c’mon, regurgiatate ALL the leftist JournoList talking points for us, I can’t believe you missed one!

And JEB is wearing an elephant costume!

Now, if she’d keep turning around, with a bucket of hot tar and a bag of feathers.

Carly does not have the high moral ground to do any kicking, tarring or feathering.

Her touted and published autobiography is full of lies. Her real story, personal and business life reveals a cold dishonest, ambitious narcissist. (see links I posted above)

As CEO of both Lucent and HP, her business practices were not ethical or good business.

At Lucent, she cooked the books, made shady loans to customers, creating a debt bubble similar to the US housing bubble, which caused the company to crash.

As HP CEO Carly did business with Russia and Iran (despite the sanctions). Those and other foreign deals garnered 107 million in fines for HP.

During the same period she laid off 30,000 HP workers, she bought a million dollar yacht and 5 corporate jets for HP.

Carly is not a political outsider at all. After her failed CA senate race, she moved to Virginia to work for the RNC.

Carly Fiorinia, Last year in Denver – Sat on a Forum for the Clinton Global Initiative – through the Clinton Foundation for Economic Justice.

The largest donation to the Fiorina super PAC — close to $1.6 million — came from Jerry Perenchio, the former CEO of Univision.

“They always tell us whom they fear.” 😀

“There is none so blind as those who will not see.”

She is a known Socialist. She embraces Islam as good for America. She faced a bad situation when head of HP. She has made several very bad business decisions & Illegal actions. She bears watching. Maybe in the Cabinet, but think about whether she is ready for the top.

Carly has more common sense than to attack her GOP support system, unlike many in the party. Trump is a bully and like all bully’s don’t have any cojones. If Carly really did that she’d reveal a eunuch.