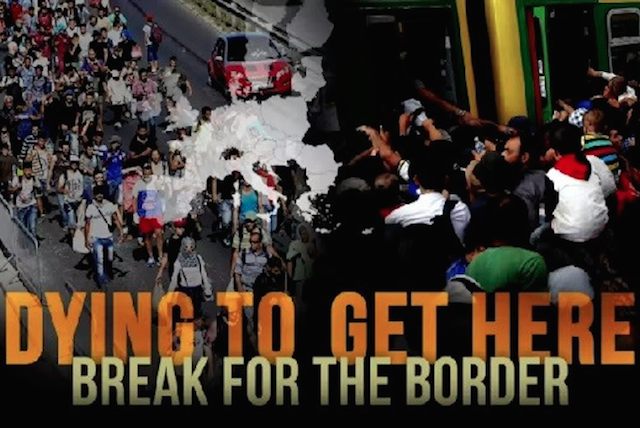 Governments across Europe are complying with European Union directives to accommodate tens of thousands of migrants arriving each day. Germany, which became the driving force behind the recent influx of migrants after it suspended Dublin convention, refuses to put any cap to the number of migrants it can absorb.

The rules of law and property rights are the first casualties of the EU push for a more ‘generous’ migration policy. Countries like Germany and Sweden are considering revising existing property laws to confiscate homes to house arriving migrants. Austria has changed its constitution to force provinces to accept higher quotas of migrants. The existing law restricted the intake of refugees more than 1.5 percent of the population. The country is expecting to receive about 80,000 asylum claims by the end of 2015. The Austrian news website The Local reports:

The move, mirroring EU efforts to oblige member states to accept more migrants, is aimed at relieving Austria’s overcrowded main refugee centre at Traiskirchen, and comes into effect on October 1.

It was put forward by Chancellor Werner Faymann’s Social Democrats and the centre-right People’s Party, which form Austria’s governing coalition, and votes from the Greens gave it the necessary two-thirds majority.  (…)

In recent months Austria has become a major transit country for tens of thousands of migrants entering from Hungary — having travelled up the western Balkans — bound for northern Europe, in particular Germany.

EU still faces resistance from some East European countries, refusing to accept migrant quota dictated by Brussels. As Swedish Prime Minister Stefan Lofven noted earlier this month, “Sweden, Germany and a few other countries have for a long time been alone, taken their responsibility. That’s not good enough,” further calling EU members states to “stand up for human values and do their duty.”

Calls for compassion coming from Brussels have been punctuated by threats of economic sanctions directed to insubordinate members states. Germany’s Deputy Chancellor Sigmar Gabriel has called for economic sanctions against EU-members who do not “shoulder the burden” [and follow Berlin’s example] by taking in more migrants.

I recently reported on how Free Speech is being restricted in Europe to quell dissent to EU migration policy; if the rule of law and property rights go down the same path, Europe will be abandoning the very principles that made the West’s success story possible in the first place.

As Europe braces to integrate tens and millions of refugees from Middle East and North Africa, it is chopping away at the very values it should be asking the new arrivals to embrace.

Confiscating property? Good Lord, do the prog drones NOW understand why we cling so bitterly our weapons? Progressives in this country failed to learn about the evils of Socialism from the recent history of the 20th century. Will they learn now that it is happening again before their very eyes?

This whole issue is insanity. Can’t anyone remember how revolutions begin? They begin when the citizens of that country reach a level of intolerance so that they rise up and take over their corrupt government. If we constantly bailout the evil dictators by accepting their unhappy masses then they, the dictators, end up with a lightly populated country filled with people who like the current government and the immigrant countries end up with large unassimilating welfare dependent group who will NEVER become happy citizens of their new country. What is wrong with the Europeans?

I don’t know. Maybe Germans and Austrians like being evicted from their houses and being replaced by migrants who ruined their own country (and might also be terrorists). I certainly wouldn’t accept it, but I also don’t understand the European mindset on a number of other issues. I believe a recent poll said that most Germans want more migrants to enter their country.

It would seem that Europe is no more. Just a collection of invaders.

Mark Steyn was right: Eurabia will kill the west.

This will end in blood.

God I hope so. Bloodshed and death are the only things that are going to teach the loony leftists that they can’t steal other peoples property to give it to third parties that the leftists think are “more deserving” because they have suffered hardship.

When the fighting comes (and it IS coming), the United States needs to keep its big nose out of it and let the European Socialists fall by the sword, let the Nationalist parties rise, and then beef up the US Military to keep our borders secure. It will result in a major re-structuring of the European states and possibly the breakup of several of the larger countries (Germany, Hungary, Poland and Sweden immediately come to mind).

Chuck Skinner, let’s make sure when the SHTF in Europe that we don’t take in the defeated lefties.

Twenty upticks for you as well.

Property confiscation. So “my property” is not “mine”, just on loan from my king, and that can be revoked, at any time, by royal decree or dictate.

No property will be taken from the ruling class – just the peasants.

No property will be taken from the ruling class – just the peasants.

That’s pretty much how they think it should work here, too.

So just stealing property from the rightful owners will not push the Germans to the right? How many election cycles before the left starts talking about giving the ‘refugees’ the vote because they can’t pull enough of their own citizens into a coalition?

General Marshall just called, he wants his money back.

How long before this happens in the U.S.? Maybe with Central American “refugees”. No wonder they want our guns.

It’s already happening here. That’s why the first words that you’ll hear out of a illegal alien’s mouth when picked up by border control will be “I am from a place that is violently oppressing my ethnicity / culture and have a credible fear of death if I am returned. I demand asylum.”

It is the “free ticket” to an expedited “credible fear” asylum hearing which (if I remember correctly) prevents deportation until heard (which expedited might mean 6-9 months later) and in the mean time while out on bail the illegal immigrant disappears.

Germany’s Deputy Chancellor Sigmar Gabriel has called for economic sanctions against EU-members who do not “shoulder the burden” [and follow Berlin’s example] by taking in more migrants.

The prompt answer from the other EU states should be “GO TO HELL.” If Germany and Sweden want to engage in cultural suicide, that is their business, but don’t foist it upon the rest of Europe.

In the alternative, Germany could foreclose on Greece, and then give each migrant family 20 acres and a mule and say “make it work.” Then build a wall around Greece and seal them in and let society take it’s course.

Actually, Hollywood has a new reality show planned on that very scenario.

Several countries are reaching that “Go to Hell!” moment. I’m surprised Austria is going this direction.

Germany? One of the not-discussed dirty little secrets is the rising level of anti-Muslim violence in certain parts of the country. Basically more rural areas and/or former parts of East Germany. Berlin may think this immigration is a good idea but not the “fly over” folks.

On second though, maybe we can have the stuff invented in India too.

I’ll need to research who invented the fork and toilet paper before I can answer.

Donald Trump is a big fan of eminent domain seizures. I wonder what his feelings on this are.

Maybe he’s only for violating citizens’ property rights when it’s to the benefit of rich, politically well-connected oligarchs.

But maybe now he & some of his fans will understand why actual conservatives have traditionally been against it.

Well, Trump took a woman’s property to make way for a limousine parking lot, so sure, I’m guessing he’d be fine taking people’s property and giving it to groups of people the media find sympathetic.

This is only right and fitting. Austria gave the world Adolf Hitler. Now, Austria has opened its arms to Hitler’s grand-children. They are goose-stepping, sieg-heiling, Mein Kampf reading, ring-down Nazis. Just as Austria welcomes Hitler with flowers, they are welcoming his grandchildren with changed laws. Austria will have its reward. Payback is a bitch.

What more proof do you need that Alex Jones is dead-on about the globalist few bent on destroying our way of life?

I am fit to be tied and could scream at the top of my lungs multiple times a day at what the idiots in government and their minions are doing here in Sweden.

Below is a debate between political & media leaders of Denmark & Sweden. Denmark comes across fairly reasonable but the nuts in Sweden…

Then this past week Denmark floats the idea that with unemployment high the bright idea would be to offer bonuses to employers if they higher refugees & immigrants instead of Danes. The logic is that if the refugees and immigrants can show employment equivalent to three years employment over a five year period, they can be granted full citizenship faster.

The facts of the matter are that there are no jobs, the jobs require high levels of education & certification. There is also a severe housing shortage in Sweden, Denmark, Norway and Germany. So, no jobs, no housing and money being bled out of the govt. budget to promise immigrants that have little chance of leaving the doll rolls to make their way to our countries.

The Germans are already evicting Germans to make room for refugees!

German government evict poor Germans from their homes for illegals – YouTube
This is truly stunning. The most blatant example of population replacement yet seen. unreal. If this does not incite a revolution then we are not people we are sheep at best.
https://www.youtube.com/watch?v=PnE3cFEehxg

Good luck organizing a revolution in Germany. I saw on the news yesterday a ‘hot mic’ moment between Angela Merkel and Mark Zuckerburg where Merkel was pressuring him to stifle dissenters on Facebook. Perhaps now people in other parts of the world will understand why us Americans are so adamant about protecting our 2nd Amendment rights, so that we may protect our 1st Amendment rights (from the government).

In which Trumpians suddenly decide that eminent domain is a good thing.