Assad Lashes Out at Western Powers as Migrant Crisis Intensifies

Assad Lashes Out at Western Powers as Migrant Crisis Intensifies

Syria reaches out to Russian media 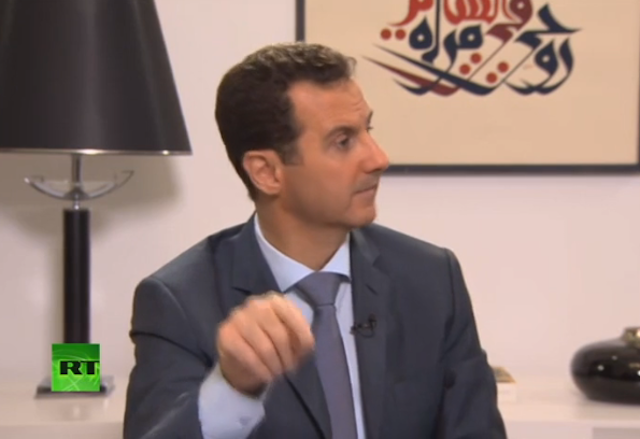 Russia has been an important ally of Syria’s during the Assad regime’s four year struggle to maintain its hold on power. Moscow recently strengthened its support for the flailing Syrian military, and on Wednesday, Russian media broadcast a roundtable-style interview with Syrian President Bashar al-Assad in which Assad placed the blame for the current European migrant crisis on Western intervention in Syria.

“If you are worried about them, stop supporting terrorists,” said Assad, referring to Europe-bound Syrians. “This is the core of the whole issue of refugees.”

He described U.S. and European criticism of his policies as “propaganda” that will create “more refugees.”
…
Assad said that a solution to the conflict could not be found until “terrorism” is defeated. He called on Syrians to “unite” against terror, portraying his government as bulwark against groups like the Islamic State, which a U.S.-led coalition is attacking at its strongholds in Syria and Iraq.

The coalition does not attack Syrian government assets. U.S. officials do not coordinate those attacks with Assad’s forces.

You can watch the full interview with Russian media here:

So, the West is crying for them, and the West is supporting terrorists since the beginning of the crisis when it said that this was a peaceful uprising, when they said later it’s moderate opposition, and now they say there is terrorism like al-Nusra and ISIS, but because of the Syrian state or the Syrian regime or the Syrian president. So, as long as they follow this propaganda, they will have more refugees. So, it’s not about that Europe didn’t accept them or embrace them as refugees, it’s about not dealing with the cause. If you are worried about them, stop supporting terrorists. That’s what we think regarding the crisis. This is the core of the whole issue of refugees.

This is an ugly chunk of the interview, but it shines a great deal of light on Assad’s mindset as, once again, his regime (and yes, I call his hold on power a “regime”) has come under scrutiny over what is happening in Syria. As the WaPo article linked above notes, Assad has a habit of lumping in forces opposed to his regime with terror groups such as ISIS; his comments here don’t flow from an intellectually honest “butterfly effect”-type analysis about regime changes in the Middle East, but from a desire to maintain his hold on power while delegitimizing those who criticize his human rights record.

(I would be remiss if I did not track back to reports from earlier this year which contained accusations that the Assad regime was executing toxic gas attacks against civilians.)

Today the State Department announced that Russia has reached out to Secretary of State John Kerry to propose military talks on Syria. No further details have been made available as of this writing.

Meanwhile, the crisis along the Hungarian border has “reached a breaking point.” Police have been forced to use tear gas and water cannons to control protests along entry points:

Helmeted Hungarian riot police backed by armored vehicles took up positions at the now-barricaded border crossing with Serbia, where male migrant youths pelted them with stones, demanding to be allowed through.

At least 20 policemen and two children were injured, a Hungarian security official said.

“It is getting very ugly there,” said Ahmad, 58, a shopkeeper from Baghdad who went to the official border crossing at Sid in Serbia but soon realized he may have a better chance of entering the EU via Serbia’s border with Croatia.

“As soon as we heard about a route to Croatia we did not wait long. I want to go to Sweden to meet the rest if my family. I hope we will be treated better in Croatia,” he told Reuters.

Serbia later said it would send additional police to the border with Hungary and try to distance migrants from the border fence, and three Hungarian military Humvees mounted with guns stepped up security on the other side of the frontier.

The UN has released statements expressing their opposition to how Hungary is handling the influx of refugees; Antonio Guterres, the U.N. High Commissioner for Refugees, is asking Hungarian officials to allow “unimpeded access” through the region so that more migrants can escape the devolving situation in Syria and across the Middle East and Africa.