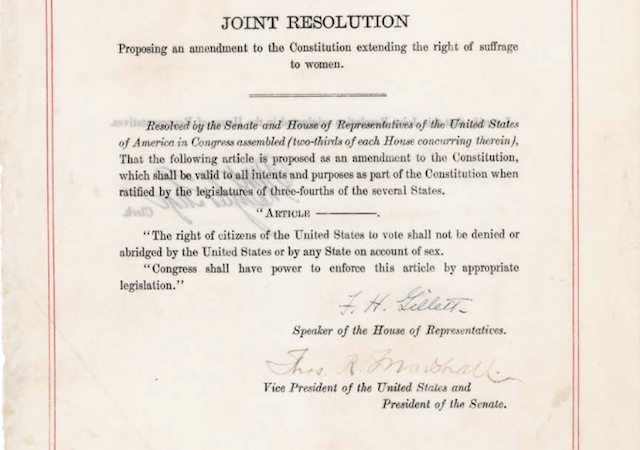 Today marks the 19th anniversary of the ratification of the 19th Amendment, which guaranteed women the right to vote.

In the years leading up to the vote, women enjoyed only sporadic access to the vote, depending on where they lived; the 19th Amendment, then, created a blanket standard for all states, ensuring that no one in America would ever again be denied the vote based on their sex.

The piece of paper that made it official looks pretty inconsequential… 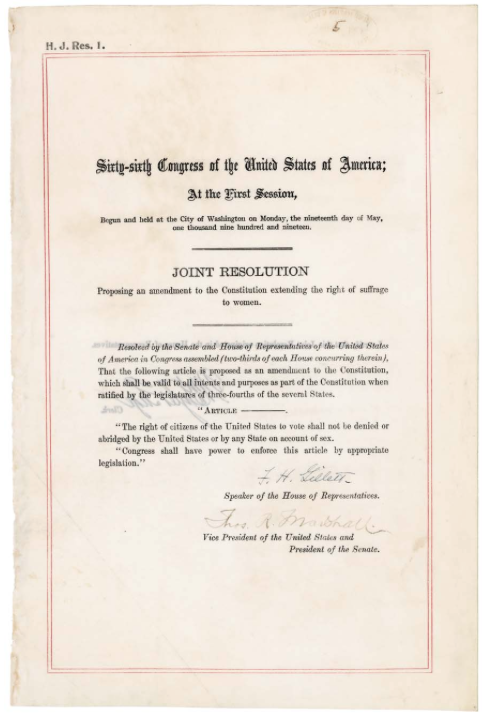 …but in reality, women gaining the vote fundamentally transformed American politics. It changed the way politicians campaign, and spurred a nearly century-long conversation about how best to reach women and convince them to put their considerable electoral weight behind a particular candidate or issue.

Politicians, activists, and the military marked the day accordingly:

95 years ago women were granted the right to vote. Today, we need to make sure the next gen of women have the opp to rise #WomensEqualityDay

95 years ago today the 19th Amendment gave American women the right to vote. Grateful for the tireless advocates who made it happen.

Women in the #AirForce, & around the world, break down barriers every day. Celebrate #WomensEqualityDay w/ us! pic.twitter.com/i3QveaL7fq

Of course, the White House seized the opportunity to sully the celebration with a finger-wag…

It's 2015. Women should earn the same pay as men for doing the same work. Period. #EqualPay #WomensEqualityDay http://t.co/kBVUqIxUyn

…but we’ve learned to expect that.

On the ground, American feminism has devolved into a parody of what drove the early suffragists to stand up and demand a voice. These days, activists use fringe issues like late-term abortion or “free bleeding” to prove the continuing existence of inequality; yet those issues pale in comparison to the one the 19th Amendment was ratified to address.

Feminists argue that there’s more work to be done, and they’re absolutely right. The fight isn’t over—not by a longshot. Women in America have it great, but overseas…not so much. For example, this year, women in Saudi Arabia will head to the polls for the very first time:

This achievement, like the ones that came before it, wasn’t handed to Saudi women, who have been pressuring their government for years. Around the world, women have only won suffrage because they’ve demanded it.
…
…real political power isn’t always so simple as having or not having a vote. In Saudi Arabia, not everyone thinks the recent milestone for women is a complete victory. According to Ali H. Alyami, the founder and director of the Center for Democracy and Human Rights in Saudi Arabia, the local officials that Saudi women and men will elect this December “have no power.” He says that all the people with real power are appointed by the king.

Still, Alyami believes that women’s participation “is a very good step, because psychologically speaking it will empower women,” many of whom are already registering to vote and planning their candidacies. Hopefully, this will lead to expanded rights for Saudi women—who can finally go to the polls, but still can’t drive themselves there.

A 1920 article from The Nation looked ahead to the various questions and challenges women would expect to face as the country adjusted to suffrage. In part:

Here’s to 100 more years—and many more—of strong, smart women, using the vote to shape this country into an even more perfect union.

Ever notice that fact never gets mentioned? Even on a site like this, you’ve spilled a gallon of ink and never hinted who supported and who opposed the 19th Amendment.

Here’s a much better article on it:

The Story of the Great Weep

“Here’s to 100 more years—and many more—of strong, smart women, using the vote to shape this country into an even more perfect union. ”

As long as women vote for the government to provide for them, we’re not going to see much of a difference in the next 100 years.

Nor will we have a union. It’s only a matter of time, now.

Fathers want the same opportunities for their sons and daughters. We want out children to enjoy their liberty and make the right choices.

No problem. So long as they earn it.