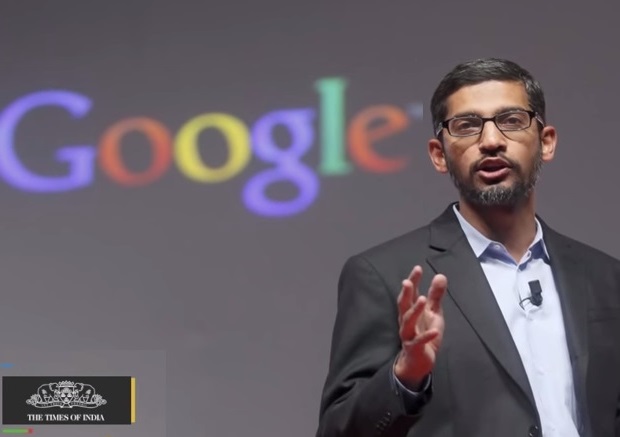 India-born Sundar Pichai has been named CEO of the newly restructured Google. The former Google CEO, Larry Page will now be heading a much larger Google entity.

The news of Sundar Pichai’s appointment, a former student of prestigious Indian Institute of Technology (IIT), was well received in India, with newspaper headlines using words like “pride”, “joy” and the fulfilment of the proverbial “American Dream” for a fellow countryman.

The leading Indian Newspaper The Hindustan Times reported the Indian IT industry’s response to the news:

The Indian IT industry elated that 43-year-old Sundar Pichai is Google’s new CEO. Pichai, who will succeed Google co-founder Larry Page as CEO a decade after joining the Silicon Valley behemoth in 2004, symbolises a new India, and represents talent, technological innovation, and managerial acumen, an Indian IT industry executive said.

The new Google CEO Sundar Pichai will not be the lone Indian-origin CEO at the helm of Corporate American. He will be joining corporate heavyweights like Microsoft’s CEO Satya Nadella, PepsiCo’s Chairperson & CEO Indra Nooyi, and Adobe’s CEO Shantanu Narayen — just to name a few.

Indians at home and abroad often highlight their country’s success in Information Technology, and rightly so. But a less advertised aspect of India’s success in IT-sector has been the contribution of Indians returning back from the Silicon Valley, California — bringing not only technical skills but also Silicon Valley’s attitude and values along with them. The truth is, there would be no Indian success story to report today if it was not for the Silicon Valley in the first place. Silicon Valley in turn is a product of entrepreneurship, spirit of enterprise and personal excellence — values that are quintessentially American.

However, the coverage in Indian media was not universally faltering. Columnist Wajahat Qazi, writing for the popular Indian news website First Post, talked about “the fading American dream”. Qazi, who often writes on religious issues and regards the advant of Islam in the Middle East as the “supremely creative event in the historical span of the region”, had some harsh words to say about America:

American society and polity is defined by the spirit of raw capitalism; this implies cut throat competition and even social Darwinism (…) The ‘American Dream’ has now morphed into an elitist privilege.

This line of attack against American and what America represents isn’t uniquely Indian. It could have been written by a Liberal Arts student at an American university. This argument is isn’t even new. Nikita Khrushchev was applauded by Western liberal intellectuals for pointing out the same iniquities of American capitalism, while Soviet jackboots were busy quelling behind the Iron Curtain.

However, the problem today is that the majority of Americans have accommodated themselves with this disingenuous and dishonest critique paddled by the left. The apologists of Third World police-states, theocracies and mediaeval doctrines are crying foul about America’s short coming and on one seems to be calling their bluff anymore. What’s even worse, these charlatans are treated by Western media as respectable intellectuals and “moral voices” of our time. Just as Left wanted America to unilaterally disarm itself in the middle of the Cold War, the same crown now wants America to abandon the very values that make America exceptional, unique and great.

There is nothing uniquely “liberal” and “progressive” — about being envious at the success of others. It is a defining feature of every third-world society. If more Americans were to embrace those flawed values, that would certainly lead to the “fundamental transformation” Left so dearly wished for America.

A recent immigrant from Australia to the U.S., Nick Adams tells us what makes America special:

Indians who have come to America have done very well for themselves. Their children have become thoroughly Americanized. God bless them.

Asian Indian Sundar Pichai is of the Hindu religion (not Muslim).

The press is ignoring and burying that vital, life inspiring fact about Pichai.

The cockroach theory for self development..”

Indian immigrants: doing the jobs no American will do.

I’m just not going to participate in romanticizing India. The tech world is importing engineers claiming “no one here can do the job”… but the dirty truth is they are doing it to drive down wages.

One of the reasons the US is not churning out engineers faster is the pay has been normalized to that of the trades- due in part to importing tech workers often with marginal qualifications. Why sweat becoming an engineer- you spend half your career avoiding lay offs and earn about the same as a plumber.

Having dealt with offshore contracts, you usually get a lot less than you pay for and far less than is required. It burns me how the tech industry has screwed the US over on this front. The “engineer” shortage is of their own creation.

BRAVO! Wage Slaves is the truth!

I have worked with several Indian legal immigrant Phd. men, (chemistry and biology). There was this streak of poetry in their technical writing, which was beautiful, and got me into endless trouble because they did not like to use the same word twice to describe a thing. They would take turns with their wives picking up the kids from school. They were delighted with their kids. They could cook.

They had outstanding educational backgrounds: wide and deep. India’s school system is doing something very right.

…and huge fans of socialism!

They came by it naturally, from the Brits and from Gandhi, but not so much any more.

Just think where they would be if not for the legacy of European Colonialism!

I always think it weird when I see comments in YouTube about the “White race” disappearing, often caused by “the Jews”. Aren’t Indians Caucasian? There are a billion of them, and they aren’t disappearing.

India is a country with some serious extremes of wealth and poverty. Neither Satya Nadella (MSFTs CEO) nor Sundar Pichai were slum dogs.

I’m not a fan of all the “cultural” things Indian immigrants have brought. Most I encounter in the tech world are huge fans of socialism and desperately want that here as if our way of life is broken, not theirs.

I’m also not a fan of the 3rd world’s inability to be truthful (not specific to India). Not that anyone holds a monopoly on lying, but I think its one thing that’s being imported in too large of quantities in the past 20 years.

I might get a lot of “flame” for that comment… but I don’t suffer from white guilt nor Obama’s apology complex. I believe other cultures should be subject to hearing our beefs with their nasty habits as much as we get dragged across the asphalt.

I make no apology about America being better than everywhere else and won’t stand for compromising those high standards in the name of multi-culturalism.

If America weren’t the best… I’d be emigrating tomorrow.

Pepsi’s CEO Noori has made it a point to outsource as many jobs as possible to India. Even sales jobs aren’t safe. The company’s lost several big contracts on her watch.

She’s running the company like a municipal monopoly. Pepsi buys up a certain % of the total water in n area, and the customers have to drink it or else. Thirst and supply/demand issues with water use guarantee some sales, even among customers who would normally prefer Coke.

Is this the plan for google? They have so much monopoly that they can skimp out on sales, customer relations, innovation and marketing? Did the Board just essentially approve of a huge new outsourcing push?

I used to work for a large lab company that hired an India-born CEO. He outsourced most of the IT jobs to India, then left the company in worse shape but with a huge golden parachute. Obviously, I can’t say that all are like this but my experience, as an IT professional, was not a positive one.

I love India, spent a year there, but I have followed the trend toward Indian workers in this Country and the biggest problem, the sacred elephant in the room, is that India profits. Whether it be contacts, contracts, creating more opportunity for their peers, or physical acquisition of manufacturing – India is profiting, not America.
Vijeta is a smooth writer and the lackeys here are all quick to jump on board but the reality is that this connection is a tape worm and it is sucking life out of America, her values, her ethic, her associations, and her national interests.
The direction foisted on us through policy by the current Administration has effectively put a needle in our collective arm and we are being bled dry. The light-headedness you feel? It is your life draining away by peoples that come here only for Capitalism, profit, and cultural aggrandizement. No matter though, the golden voice you hear faintly through the intercom is Obama telling us to “relax, be quiet – we will be landing soon”.
Companies have been destroyed, our workers have been displaced, and India has profited much. Check the history of Cardiac Science for a taste of what has been done to us by the FDA, and I doubt you will be singing the same praises.
No matter though, they now want to shut down mining – we are on to the next new crisis. http://www.freerepublic.com/focus/f-news/3323794/posts

there is one common component to all their success stories, UNITED STATES, not India, the US. I’m sure every one of the companies has an India subsidiary, why are they not the head of that company.