The battle will be fought online 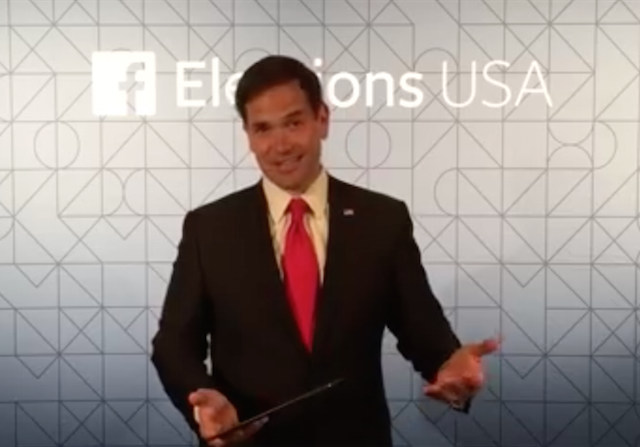 The digital space has become an increasingly important—and diverse, and lucrative, and powerful—medium for candidates to market themselves to voters. This election cycle, we’ve seen campaigns go to new lengths to make sure that their figurehead stays relevant and connected to voters who use the internet to get their daily dose of political spin.

The event sparked strong social conversation with 7.5 million people generating more than 20 million Facebook posts, comments, and likes. Many turned to Facebook to comment on the candidates’ performances and discuss issues of importance, as the voices and faces of people on the platform framed the questions and tone of this early #GOPDebate.

…
During the debate, the candidates responded to questions directly from people on Facebook, including Facebook Video submissions. This was the result of a month-long, call-to-action campaign that generated nearly six million views and received more than 40,000 responses. FOX News asked viewers to submit their “one question” for the candidates. These videos and posts elicited powerful, personal responses that were incorporated directly into questions from the moderators.

When the debate was over, Facebook doubled down on the importance of connection-building by showing users that their questions hadn’t just faded into the void:

Senator Rand Paul answered a Facebook user’s question on what he would do to ensure that Christians are not prosecuted for speaking out against gay marriage: http://bit.ly/1hmuNnI

Candidates don’t look at Facebook as just a networking platform; they see it as a tool they can use to market a side of themselves voters don’t often get to see in TV spots or at a rally. Texas Senator Ted Cruz shared a picture of himself and his daughters taking some time together backstage during Thursday’s debate whirlwind. 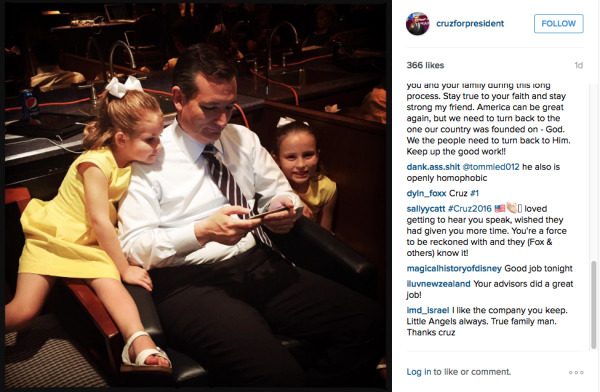 Images like this are powerful, especially for firebrands like Cruz who sometimes come across as perpetually intense and plugged in to the political scene. It serves as a reminder that yes, these guys are human. (Shock!)

At this weekend’s RedState Gathering in Atlanta, Georgia, Facebook set up a “60 Second Challenge” and allowed candidates to answer non-political (read: human) questions about themselves. Marco Rubio stepped up and had fun with it:

Yesterday at the RedState Gathering in Atlanta, I took the Facebook 60 second challenge – find out who my childhood idol was and more! #RSG15

As with any medium, the digital space is easily manipulable. If you’re careful, you can whitewash your past, present, and future to look absolutely #flawless—and most voters will see that coming a mile away. People crave authenticity in their connections, which is why I think mediums like Instagram (a Facebook property), or campaigns like Facebook’s “60 Second Challenge,” are crucial buy-ins for candidates who are interested in keeping things real and—oh, I don’t know—staying human in the midst of the this three ring circus of a primary season.

A battle for young ‘independents’ too willfully ignorant to entitled to vote.

The voting franchise should be limited to productive citizens — those who are not on the government dole.

Carly Fiorina’s Facebook fans have the best grammar, spelling and punctuation at only 6.3 errors per 100 words. Donald Trump’s fans came in last at 12.6 errors per hundred words. 😉

While many Obama supporters are barely literate.

Remember, Al Sharpton is an Obama fan. So is Shelia Jackass Lee. So is…well, you get the point.

Boehner, McConnell and Prebus can probably spell well, too.
But they’re probably the three of the biggest morons in politics.

You can have common sense and not spell a word. But you can write the dictionary and have the common sense of Sheila Jackass Lee — which describes most people teaching at colleges, as well as those running the GOP.

Take common sense any day. Remember Americans stricken by poverty during the Great Depression (no, not the one since 2008 – the one in the 30s): the vast majority were law-abiding, patriotic, team-players and looking for work; and they survived without government hand-outs. Compare to the Great Cretin’s constituency (about half the nation.)

So far, no one running on the GOP side has proved to be the force of nature that Trump has been. He’s serving a great purpose purpose: other that Cruz, Walker and Paul — who are doing fine on by their brave selves — he’s helping to free the log-jam of fear paralyzing the right.

The election is a year away. We have plenty of time to choose. Right how, we some heroes on the right. Trump is among them.

He is continuing to spew like a damn fool.

Warning, alert, danger, the great B&W Snarks are in the water, don’t let’em drag you under whilst wading in this pool!

The legacy media has lost its monopoly on information and influence peddling. Do they understand why? The recent stock devaluation shakeup on media value will now start seeing the salary (from executives to talkie heads to news readers and MSNBC laid off their deadwood) slash. Ad revenue is falling due to lack of willing eyeballs who see no value in what they peddle. The Fox bet on huge audience for a clown show/wrestle-mania probably hurt their value in the long run. Markets and consumption patterns are ever changing. Those who bet wrong or don’t keep up lose.

The debate is still available online. You should find it and watch it.

The only debate that day took place at 5pm.

The “Main Event” at 9 was a scripted hit-job. Entertaining as all getout, but no resemblance to an actual debate. Fun to watch if you like fake reality shows hosted by attractive tarts!

A major battle will definitely be fought online. But don’t forget that some 15 percent of the population is not online. Many of these are older people who vote. Local newspapers, TV and radio stations continue to matter, as well as local volunteers.
https://www.yahoo.com/tech/s/still-offline-us-non-internet-users-stuck-15-204130774.html