Who was Vester Flanagan? 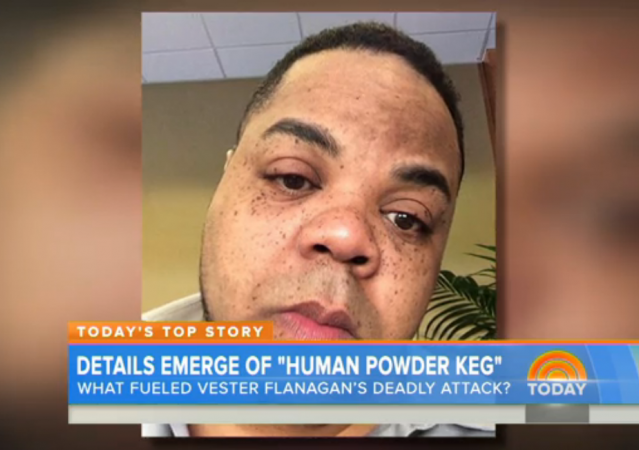 The day after the tragic on-camera murder of a Virginia-based local news crew, we’re still piecing together what occurred.

This is what we know so far.

Thursday afternoon, NBC News took a deeper look into presumed gunman, Vester Flanagan, who was known on air as “Bryce Williams.” After murdering the news crew, Flanagan fled, took his pursuit to social media, then turned the gun on himself, taking his own life.

A former WDBJ employee, Flanagan was ordered to contact Health Advocate, the Employee Assistance Program after having multiple confrontations with photographers. After he was fired in 2013, he sued the station.

According to NBC News, on the day Flanagan was terminated he became so violent, he had to be physically removed from his chair while station employees called 9-1-1. The photographer? Adam Ward, one of Flanagan’s victims.

Other news stations on Flanagan’s resume claim he was, “difficult to work with” and had disagreements that, “almost became a physical thing.”

According to a probable cause affidavit filed to search Flanagan’s car, police said Flanagan texted a friend “making reference to having done something stupid” following the shooting of WDBJ reporter Alison Parker, photographer Adam Ward, and local chamber of commerce director Vicki Gardner, who was also shot and survived.

The car had a rental agreement from Enterprise inside it.

On Wednesday, Enterprise told NBC News, “When situations involve the police, we always – as a matter of policy – refer all related media queries to the local authorities. They are in the best position to know all of the facts and which details should and shouldn’t be publicly shared.”

CBS News has a fuller story on the events leading up to Flanagan’s firing from WDBJ and the events that transpired when he was subsequently fired:

After Flanagan was hired, however, his job performance and interactions he had with coworkers led his manager to put him on a “succession of performance improvement plans” and “only slight improvement was noted each time,” according to Marks.

In December 2012, Flanagan was placed on a final warning for “failure to check his facts in a news story and, generally, for poor news judgment,” Marks said.

According to Marks, in January 2013, Flanagan accused a photographer of causing trouble for him by questioning a decision to go on private property in pursuit of a story. It was at that point that Flanagan raised some concerns with human resources of perceived unfairness. Marks said the claims were investigated and found to be without merit.

Shortly after that, Marks said, Flanagan confronted an anchor who was assigned to review one of his scripts and then management made the decision to “separate him from the company.”

According to Marks, once Flanagan was notified of the decision on Feb. 1, 2013, he reacted angrily and said they would have to call the police because he was going to “make a stink and it was going to be in the headlines.”

Police were called and Flanagan was escorted from the building, Marks said. On the way out, he handed a wooden cross to the news director and said, “You’ll need this,” according to Marks.

Marks said Flanagan also made a derogatory comment toward Adam Ward as he exited.

Following Flanagan’s termination, he filed a complaint of harassment and discrimination with the Equal Employment Opportunity Commission (EEOC), which was subsequently denied, Marks said. Flanagan then filed a civil action in local court in Roanoke.

According to the Associated Press, Flanagan’s lawsuit claimed the station’s camera operators conspired against him because of his race. It said a watermelon at the station was a racial slur, directed at him.

He asked for a trial by a jury comprised entirely of black women. A judge dismissed the case in July 2014, week before the trial date.
Marks said that there were instances where employees of WDBJ reported seeing Flanagan after he was fired, but they were only sightings. No confrontations had been reported and Marks said he was unaware that Flanagan harbored a grudge toward the station or anyone who was employed by it.

Showing three still images of Parker right before she was shot as the cover image of Thursday’s paper, the New York Daily News dredged up discussion about the discretion of using violent imagery. The stills were lifted from Flanagan’s own recording of the the atrocity.

The New York Daily News is no stranger to provocative images and headlines, but critics say the paper went too far with its Aug. 27 cover depicting the death of a journalist broadcast live on television.

The newspaper published three still images from a video uploaded by suspected shooter Vester L. Flanagan II. The graphic images show reporter Alison Parker of WDBJ-TV seconds before she was shot up until the moment when it appears the first bullet hits her body.

Parker and a cameraman Adam Ward were killed by a disgruntled former newsroom employee early Wednesday during a live interview with Vicki Gardner, executive director of a local Chamber of Commerce, in Smith Mountain Lake, about 35 miles from Roanoke, Va. He later posted the shooting on Facebook and Twitter.

The Daily News was not alone in its decision to publish the graphic images. Several newspapers in the U.K., including The Daily Mirror, The Daily Star of Scotland andThe Sun, used the images from the gunman’s point of view on their Thursday covers. Others outlets, like the BBC and The Guardian said it would not publish the videos.

“Showing the victim from the killer’s perspective at the moment of her death is beyond the pale of exploitation,” Drago told the Post.

The New York Daily News’ decision to publish the video stills on its front page puts a spotlight on the debate that faced newsrooms across the country: Should the graphic video and images of the Va. shooting be shared with audiences?

On CNN, anchors said they would show the video once every hour, while MSNBC and Fox News do not appear to have aired the actual shots, NPR reported.

Jeffrey Marks, the WDBJ-TV station chief, said after showing the video of the shooting once, they would not show it again.

“We are choosing not to run the video of that right now because, frankly, we don’t need to see it again,” Marks said on-air Wednesday as the murders unfolded.

Vicki Gardner, survived the shooting and is currently in stable condition, according to KTLA.

Was his mother crazy? How do you name a kid “Vesper?” Did she talk with a lisp and was trying to say “lester?”

How did this guy get hired? He got interviewed beforehand, right? No one noticed this guy was off his rocker? (True, he probably medicated away his psychiatric symptoms during his interview appointments.) But as soon as you saw this story on your TV screen, you knew. Even if you never had a single course in psychiatric disorders, you knew!

Hiring psychotics because you think this is “affirmative action” is crazy! (The families of the victims just needs one lawyer to help them figure this out!)

What concerns me these days is that we have a lot of mentally ill or mentally unstable people running around and in the name of progressive ideology we are not trying to get them help. Not only do we pander to them by telling them they are perfectly normal, we give them victim status and then attack and slander anyone that does try to help them.

Still, they get elected…

I see where Deray first blamed it on a white guy .My guess is he thought it was Shaun

LOL!!! Shaun swears the White guy on his birth certificate is NOT his father. (wink)

Vesper(s) ,evening prayer session in many religions , perhaps his mom was Christian

His name is Vester, not Vesper. His father has the same first name.

We had a Vester in school — it was short for Sylvester.

We need (maybe have) a term for “hyper privileged awareness syndrome”, for those in the protected classes (gay, black, woman … anything but white male Christian flag waver), that have been hyper-sensitized to any that don’t retreat or bow to a grandiose personality, enabled only by that feeling of entitlement.

The psychological minions from the collectivist class (Alinsky, Marx maybe, others beyond my pay grade) have manufactured this disease, and most Democrats in the political class are carriers. It manifests as in a manic fashion, with a grandiose sense of over sized self worth, with inner faults transferred to outward causes.

The marches and riots for Trayvon and Brown are milder crowd examples, and this murderer is a stage four case, which is fatal for others. The perceived grievance accumulation instills a sense of victimhood, to the point self correction is negated, as they perceive their life is controlled by evil (usually “white privilege”) forces, which must in time be destroyed.

These manics(?) will try to destroy others first (Trayvon, Brown), but others attain office and methodically spread the disease, seeking special privilege via law.

Anyway … that’s just a rough draft, but clearly all this BS of white privilege, or the “hands up don’t shoot” baloney, gets into people’s heads and drives them to riot or murder. It is spread intentionally from the highest office, a sort of WMD of the psychological kind, often propelled with drugs.

Vester Flanagan, Sr, his father, was an outstanding college lineman who was drafted by the Green Bay Packers in 1961.

Race aside, Flanagan increasingly resembles serial killer Andrew Cunanan. Both men had accomplished fathers, very devout mothers, were homosexual and had ambitions to celebrity status but lacked the talent and/or ambition to achieve that status. Each also tasted a bit of what they aspired to. As homosexual arm candy, Cunanan attended some swank parties in California. At one he may have met the son of a future victim. Flanagan held a series of jobs as a TV reporter. When each man snapped, they then killed people who had what they did not have. Cunanan, the wannabe international jet setter killed Vessace, the real thing. Flanagan the wannabe TV anchor killed a TV reporter whose future seemed bright. And both committed suicide.

“Following Flanagan’s termination, he filed a complaint of harassment and discrimination with the Equal Employment Opportunity Commission (EEOC), which was subsequently denied, Marks said. Flanagan then filed a civil action in local court in Roanoke.

According to the Associated Press, Flanagan’s lawsuit claimed the station’s camera operators conspired against him because of his race. It said a watermelon at the station was a racial slur, directed at him.”

Parker was the female victim in the shooting

DO NOT USE THIS ASSHOLE’S NAME! It is what he wanted. List him as “some asshole”. It doesn’t matter what his name is or what his “problem” is. He is just SOME ASSHOLE.