Would such a thing be possible now? 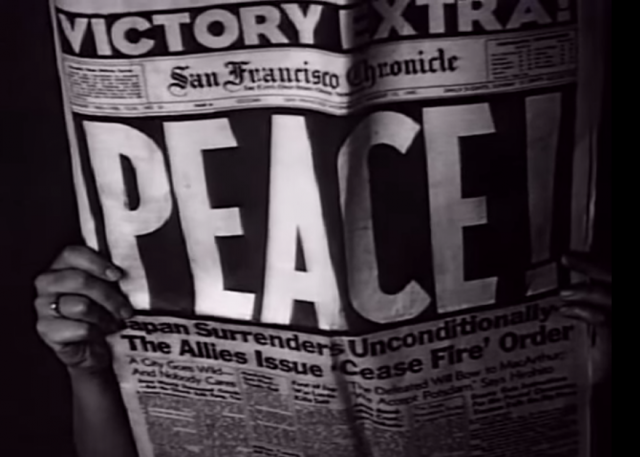 The Ocean State is the only one that still observers an official holiday marking Japan’s surrender at the end of World War II. That’s been the case since 1975, when Arkansas dropped the commemoration, which it had already rechristened “World War II Memorial Day” by that point.

There have been attempts to rename the holiday here in Rhode Island, too – Gov. Ed DiPrete tried to transform it into Governor’s Bay Day, and in 1995 there was a bid to start to calling it “Peace and Remembrance Day” – but protests from veterans and traditionalists have always put the kibosh on them.

There’s no question World War II had an enormous impact on Rhode Island. More than 100,000 of the state’s residents served in the war, and 10,000 were killed, injured or lost.

There is a memorial outside the library in Barrington, Rhode Island, where we used to live, with the names of 26 town residents killed during World War II. Twenty-six. From a tiny town in a tiny state. I think it is nearly impossible for us today to appreciate the sacrifices made. 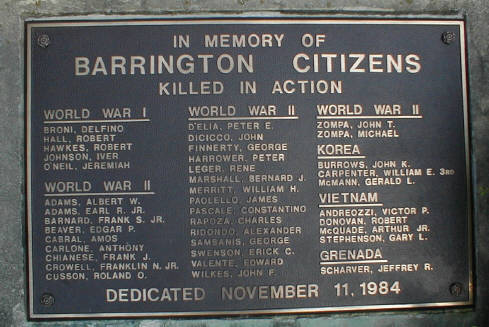 Or the will it took to insist on unconditional surrender.

Or the joy when the war truly was over. 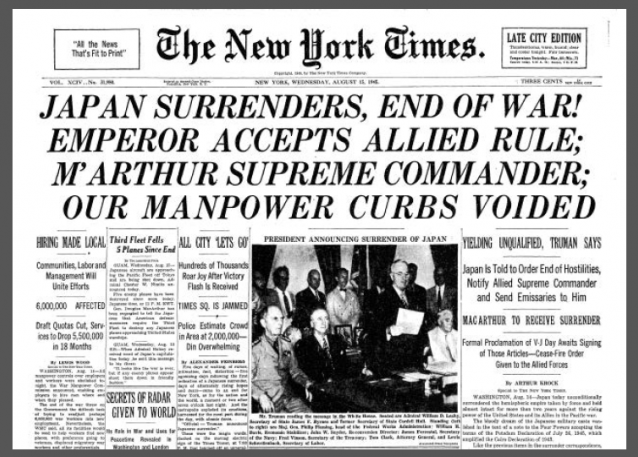 I’ve posted this video before, but it’s worth posting again:

In September, the formal surrender papers would be signed on the USS Missouri:

No of course this could never happen today.

Firstly politicians back then seem to have been made of sterner stuff because todays politicians have had their backbones replaced with soft white mushy stuff.

Secondly the left would never allow such a thing to happen today because, remember, we in the west are evil imperialist capitalist scum and terrorists like jihadist are that way because the West is to blame.

Agreed. Mailman, squeezing the situation into that very specific narrative (West bad, America bad, enemies good!) has become more important than any objective assessment of what is going on in the world.

The WWII memorial in Bedford VA. is in the town that lost the largest percentage of their population. All of the soldiers from Bedford were in the 29th Infantry and this particular battalion was among the first to land on Omaha Beach. We stopped there one day and a WWII vet took us on a tour. He went ashore on D-Day and survived. He took us to a place in the wall and pointed to the name of his twin brother who was killed on D-Day. He only said that he still missed him.
The debate on how the war was finally ended will rage on as long as the world exists. Which evil will be selected as the best way to end a war we did not start?

I imagine if we had invaded Japan, or merely blockaded it, and caused millions of casualties, many of them civilian, we would today be blamed for not ending the war quickly with our atomic weapons.

When my mom got the news she called her mom and told her in German. Then she called my dad’s mom and told her in English. My dad’s mom had three sons serving. Then she grabbed four month old me and ran into the street yelling and screaming. My dad was a second lieutenant in a crack quad 50 antiaircraft unit composed of college draftees who were mostly math majors and whizzes with both circular and linear slide rules, the hand held computers of their day. That’s why they were a crack unit. He was stationed in the Philippines waiting for boarding orders for the invasion of Honshu. His unit was one of a couple like it who were to follow the Marines ashore and quickly set up the quad 50s aiming inland with the purpose of shooting down kamikazis headed toward the troop ships. He thought he wasn’t going to make it home.

While he was in the Philippines he bumped into a school buddy who was in a supply unit. His buddy took him and showed him the four warehouses where the army had one million body bags at the ready. I’m sure that cheered him up.

For the rest of his life he was grateful for the use of nuclear bombs on Japanese cities. “Dammit, it was us or them and I wanted it to be them.” he used to say. We celebrated Hiroshima every year with a 12 pack. He’d raise his beer and say, “Happy Hiroshima Day and a very Merry Nagasaki to you.” He was a Lt Col. by then and a battalion commander of self propelled 155mm arty.

I hate when I see something today by any of the historical revisionists saying that we didn’t need to use nukes on Japan. That’s a lot of hooey by noncombatant cowards whose asses were not on the line. I got to see and grow up with a dad because of those nukes. So did my seven younger brothers.

It could not happen today.

Today, it might even be fairly difficult to “field” a large army. (Of course, there is always the draft.)

But with the recent trends in history education, it’s seems likely that very many young people would not consider fighting for their country to be a good thing. Because too many have been taught that America is not a good thing.

We need to start thinking of history education (warts and all, not just warts) as a national security issue.

Choreographed and directed tank warfare with satellite / drone camera targeting allows for a LOT of damage to be inflicted VERY rapidly, with ground or naval artillery support or (in the not too distant future) Laser Weapon System (LaWS) Support.

Integrated Air support with ground units can make for devastating combined attacks, rapid ingress and egress and tactically significant missions being conducted in a fraction of the time it would have taken in past conflicts.

“more effective,” perhaps, if all the lawyers in government were quarantined.

You’re correct. During the Gulf War, it almost happened. During the Iraq war, politics and such got in the way just as it did in Vietnam.
Interesting though, I read Battle Cry of Freedom about Abe Lincoln and the Civil war and it seemed the same types of politics and civil unrest took place then as well.
It would take a very strong and courageous CINC to see it all the way through to the end, i.e. real and final victory over the enemy like Sherman or the Romans with Carthage.

It could not happen today with the ~CURRENT~ leadership.

Every day that I attended High School, I walked by a memorial wall of students of the School who had been killed in military combat in WWI, WWII, Korea and Vietnam. For a town with a relatively stable population of approximately 10,000, it was an awfully LONG list of names (the names portion of the memorial completely covered a 12′ wide by 4′ tall portion wall, IIRC), with names approximately 1/4″ tall.

Almost 1/3 of my graduating class from high school joined the military in one form or another (enlistment or ROTC).

The father of a friend of mine worked on the Manhattan Project. In later years, when he was asked whether he had any regrets, he would say he only had one: that they didn’t get it done in time to drop on Germany.

Of course it couldn’t happen today. We’d have some U.N. ninny and a bunch of weak-kneed politicians calling for an equitable cease fire to stop the killing, especially of innocents.

I’m also a Rhode Islander, now living on the Left Coast. I see you’re from Barrington (I’m from Pawtucket, home of Slater Mill and the triple-A Red Sox – if Providence doesn’t manage to lure them away).

I wonder – Did you know Fred Dick of Barrington? Fred owned an auto dealership, was a vet of WW II (P-38 pilot, Pacific Theater), and a staunch constitutionalist. I met Fred through a organization (and I use that term loosely) called RICE, Rhode Islanders for Constitutional Education. If you’re familiar with that gang (operating during the 1980s, possibly into the 90s), you and I may know several people in common.

Four of five of my uncles on my mother’s side are/were WW II vets (the fifth was too young). One served in the ETO (and was a POW for 18 months), the others serving in the Pacific with the Navy and the Marines. I have the greatest respect for their service.

We have not had a serious threat like Japan Germany since the fall of the USSR. Al Qaeda and ISIS are not even close in threat (yet), but if they get nukes watch out.

And if that happens, things will get very scary very fast.

My Mom was from a small NC town. Her high school senior class had 28 students. On Dec 8, 1941, her older brother and every male between 17 (parents consent) and 25 went to the nearest recruiting office and signed up. I don’t recall now how many that was, but they were all gone.

Anyone really think that would be the result today?

My Dad was on Tinian Island when Enola Gay and Bock’s Car flew off North Field and ended the war. Pop was on West Field with the 58th Bomb Wing, 462nd Bomb Group, The Hellbirds. I LOVE their Group Motto which was on the nose of all their Hellbird B-29s: WITH MALICE TOWARD SOME.

Thank God for the Atom Bomb.