Life in prison, no parole…developing… 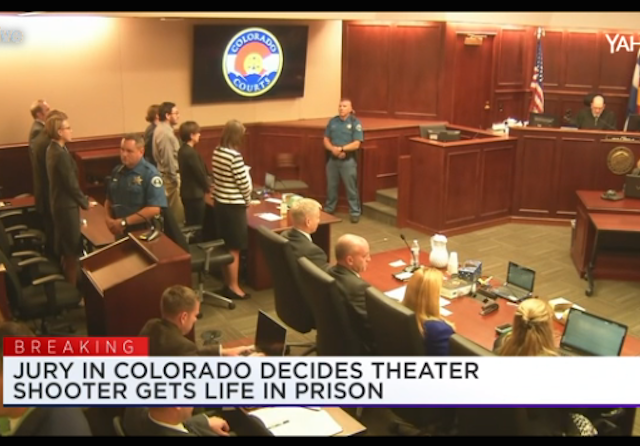 Three years ago, James Holmes walked into the midnight showing of a new Batman movie, pulled out a gun, and opened fire into the crowd. He killed 12 people, injured 70 others, and referred to his victims as “collateral damage.”

In the aftermath, the media scurried for explanations, blaming everything from the tea party to mental illness for such a senseless and upsetting act of violence. Still, justice prevailed, and a jury found Holmes guilty of 24 counts of first-degree murder and 140 counts of attempted murder.

Today, that same jury will decide whether or not Holmes should face the death penalty for his actions. A decision is expected at 7 p.m. ET, and we’ll cover it live here (hopefully with an embedded livestream.)

For the final decision, the jury deliberated for less than seven hours, starting on Thursday afternoon and continuing through Friday.

If the jury decides against the death penalty, Holmes will get life in prison without parole.

Twelve people were killed and 70 were injured in the attack.

Defense attorneys argued that Holmes suffered from schizophrenia and he was legally insane when he carried out the attack. The jury rejected that defense in finding Holmes guilty.

In the penalty phase, Holmes’ lawyers said it would be inhumane to execute a man who suffered from mental illness.

We have a live stream:

The jury is seated, and we’re just waiting for the verdict to be read.

THE VERDICT IS IN: THE JURY IS NOT UNANIMOUS ON THE DEATH PENALTY FOR COUNT 1

The judge is still reading through all the counts, and so far, the jury has not reached a unanimous final sentencing verdict on any of the counts. This means that the court will impose a sentence of life imprisonment without the possibility of parole.

You can hear the cries of the family members in the gallery. It’s going to be a wild media cycle for these jurors.

Jason Sickles, a Yahoo! News reporter who has covered this case from the beginning, notes the shock in the room—especially on the prosecution side:

District Attorney George Brauchler looks defeated. Everything in this trial had gone the way of the prosecution until this hour.

Will be interesting to see if prosecutors poll the jurors. I imagine they will.

This is a shocking verdict by any standards, but especially so considering the amount of physical, visual evidence the prosecutor was able to present to the jury. The panel was shown video of the aftermath.

Colorado theater shooter will get life in prison.

Jury could not agree on death penalty. pic.twitter.com/Pbawugp70e

The sentencing hearing is scheduled for August 24-26.

The live stream appears to have converted to a playable video, but just in case, here’s a video containing the reading of the verdict:

This is probably a good call. Holmes is/was obviously deranged, but at the same time considered competent to stand trial and to have known right from wrong. In the absence of his illness, he almost certainly would not have committed this crime, but, despite being able to tell right from wrong, he lacks the ability to control his own actions. What to do? Execute an obviously mentally ill person? Or fail to execute someone guilty of an obviously heinous crime?

This is a simple travesty of justice. I spent more than 10 years working in forensic psych. (i.e. treatment of the criminally insane) and one thing I can say for sure is that this animal should be put down, period.

While he may be deranged, why should that absolve him of responsibility? If he is really that deranged then he is simply to dangerous to be allowed to live.

But all it takes is one bleeding heart liberal like you to subvert justice. It is my ardent hope and prayer that someone will just beat him to death just like they did Dahmer.

You couldn’t be more wrong, Dave.

Whatever else you can say, that jury earned its money.

No kidding. Some cases are difficult jobs.

Yes, unfortunately all it takes is one bleeding heart liberal anti-death penalty type to subvert justice.

It’ll be life as long as Holmes remains in a secure cell. If he gets out into the general population, he might be a goner; pity, not!

Good, don’t kill him. But torture him within an inch of his life, for the rest of his life.

Hopefully he’s just sane enough to understand that he’s stuck in a shithole for the rest of his life and will be suitably distressed by the misery of his existence.

Anybody sentenced to live without parole should be able to request execution by firing squad or hanging.

Question… If 12 were killed, and 70 injured, why was he found “guilty of 24 counts of first-degree murder and 140 counts of attempted murder”, exactly twice the actual numbers?

I may be wrong (someone correct me if so please) but I think thats related to the amount of rounds he fired.
even is a rounds didn’t hit anyone it was fired with the intention of hitting someone.

He deserves the death penalty.

He may be guilty. Liberal society likes their victims to be wholly innocent. Another paradox of the pro-choice “moral” doctrine.

I was hoping to see some kind of explanation about Colorado’s definition of insanity. Holmes was apparently sane enough to be tried and convicted but someone on the jury felt he was too sick to be executed? That is really hard for me to understand. I would like to believe that the juror had no objection to capital punishment on principle, I know that they are screened for that, but still you have to wonder. As Mr. Pierre already noted, they do deserve our thanks for the difficult job.

he wasn’t offered a position in 0bama’s administration as one of 0bama’s gay lovers and spreader of communism? 😀

Taxpayers pay for this guy to live a miserable existence for the remainder of his natural life….awesome sense of justice.