The war on “White Feminism”

The war on “White Feminism”

Just when you thought modern feminists couldn’t get more ridiculous… 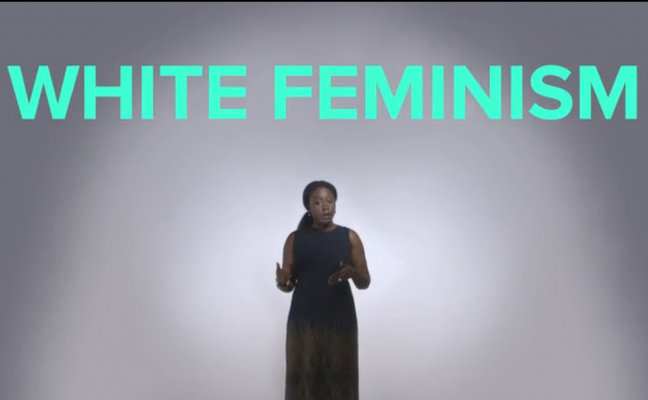 As is typical in the Land of Social Justice, each attempt to further define the the model social justice warrior leads to the alienation of the reigning Champion of the Cause. Such is the case with this video on White Feminism.

“You may have heard the term “White Feminism” lately, but what does it mean? Basically, White Feminism is feminism that ignores intersectionality. So, not all feminists who are white are White Feminists, but most White Feminists are white because white people just don’t have to think about things like race on a daily basis,” explains the video from the Huffington Post.

And then it sinks even lower with a few factually inaccurate references to the Sandra Bland case. Do misogynists exist? Sure. Are they indicative of all men? Absolutely not. But by all means, let’s build our life view around the behavior of a fraction of mankind rather than the majority.

Because modern feminism is so inclusive, it now demands that White Feminists, “shut the f**k up.”

In a fantastically contradictory statement, the video explains, “critiquing White Feminism isn’t about silencing those women, it’s about opening up space for even more diverse voices to be heard… Being a White Feminist doesn’t make you a bad person, it just means you have a lot to learn. Because sometimes as white ladies, we just have to shut the f**k up.”

Modern feminism is no longer about justice or equality. For not only does modern feminism seek to punish men for simply being men, but it serves as little more than a purveyor of victimhood for the insecure and undisciplined in the most immature and selfish sense.

Well, I am a “White Dittohead.” How come they don’t do an article on me?

Another full of herself idiot has wasted precious time spewing her views.

Jeez! Doesn’t she have a house to clean? Food to cook? A family to care for? Don’t these people ever shut up with their nonsense? Can’t they ever just see us all as people going through the dash?

OMG!!! Are you suggesting that she is somebody’s house keeper, or cook, or nanny?!?

That is SO RAYCISS!!!

Or did you mean she has her own house and kitchen and kids? Oh wait! Then that is SO SEXIST! Where is her husband?

Wait! That would be spouse privilege!

“And we’re not just pulling the race card…”

Yes you are. You want special privileges and attention.

Substitute “entitlement” for “victimhood” for the Second.

Frankly, it wouldn’t surprise me in the least to find that “white feminists” hate black women.

To the best of my knowledge, acquired by as close an approach as may be regarded safe and prudent, the white feminists hate just about everything and everybody – including themselves.

Considering that they want to abort blacks in droves, yeah, I’d have to agree that they hate black women.

To me, this is merely proof that the American black women are part of that nasty mean-girl sub-culture I saw when my kids were in school.

I was a nerd, so I missed it. I moved a lot, I had more friends among the guys than the girls. Worse, I liked to read, and could do math better than all of the girls, and all but the local genius boy. If I’d have been black, they would have called me “oreo,” but instead, they called me “brains.”

So, the mean girl culture I saw in my kids’ school was something new to me. This loopy, exclusionary snide language is just mean-girl talk.

People with real authority do not talk like this.

In Progressive ideology straight white males are not really people. We are a commodity — undifferentiated, uniform, uninteresting, and bland in our whiteness, maleness, and straightness. We have nothing to offer, except our obedience to Progressive thinking. We are the oppressors, and our only value is to sit in silence and learn from our betters.

For the Progressives, the real people, the nuanced people, the people who count, are the female, the queer, and the minority. THEY are the ones with the important experiences and ideas, that must be comprehended, valued, and cherished every single day. It is their experiences and ideas from which we all must learn. At every turn they must be protected, popularized, supported, and accommodated.

Another bunch of idiots …. wait … isn’t it just the same bunch again ?

Hey, black lady, the only thing that allows you to express all this nonsense (such as “intersectionality” – SHEESH!) is a very complex language brought to you by white people.

If you were still back in Mother Africa, your language might very well be a series of clicks and clacks that can say, “The sun’s going down,” “Light the fire,” and very little else.

You definitely can’t translate “intersectionality” into something the Kalahari people can comprehend!

…And they’re better off for it!

Everyone is climbing onboard the band-wagon of strife.
Have no fear fellow whiteman, by the year 2060 we will be the minority, so teach your grandchildren well. Save these videos for them to see, so they too can learn how to push the meme! YAY!
{{{pfffttt}}}

These people haven’t jumped the shark – they’ve been eaten by it!

A white lefty woman wrote an article in the local prog rag here about how she learned from a black friend (or “superior”, I suppose) that it was racist of her to be outgoing, friendly, and chatty at parties, because that got her attention that could have gone to black person, so she learned to be more reserved. After all, we know that all blacks are wilting wallflowers who just need a bit of care to bloom.

If the frontier of American freedoms has pushed this far out into the stratosphere of crazy, I’d say we’re in pretty good shape.

Not a bad deal at all. Liberalism is mostly a white led con-game that guilt trips the population at large. Let them defend themselves against the monster they created. In the end White Libs will win, but it won’t be as easy as always.

As the member of a motorcycle gang I don’t have to put up with much in the way of progressive feminism. They avoid us. It might be fear.

The division of a population into sub-groups, which are then driven to be ideologically opposed to each other; to focus more on each sub-groups differences rather than their similarities.

A means of controlling a diverse population by encouraging infighting rather than unity.

Watch for increased focus on LGBTQQ vs. straight (why don’t we get any acronyms?), rich vs. poor (round #infinity), and Christian vs. non-Christian divisions in the near future. The more the population can be divided, the easier it is to control.

While we play the game of Who is the White Feminist? I would like to award Margaret Sanger the title. She definitely had a way with black women and babies. She was the queen of eugenics activism in black neighborhoods.

Personally, I ignore intersectionality every time I go through a yellow light. I’m a Fifty Shades of Grey kind of white feminist, I reckon.

I had to look up what “cis” meant in the post-modern vernacular. It means being comfortable with the “gender and sex” [sic] you were born with.

I self-identify as a straight female cat. Does that make me a trans-species, trans-gender, trans-sexual? Should I ask Rachel “Sideshow Bob” Dolezal for advice?

Why do I doubt if hetro males can claim to be cis?