The Return of Hillary’s Thing

The Return of Hillary’s Thing 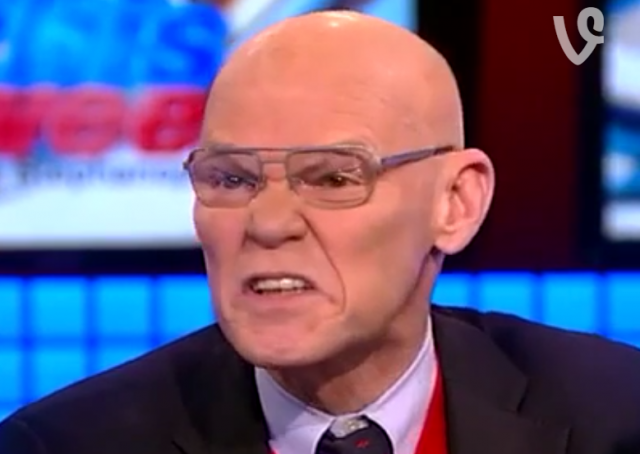 Whenever Hillary Clinton is in trouble James Carville isn’t far behind, snarling and sneering at her critics, labeling their claims as ridiculous and unfounded.

Parts one and two of this horror series came out in March of this year, as soon as Hillary’s email problems began. Now, he’s back for the third but certainly not final chapter.

Ragin’ Cajun James Carville is Back to Cover Hillary’s Tracks

James Carville, the wily Democratic consultant who has been a close Clinton ally for more than two decades, is back on the trail to cover Hillary’s tracks.

Since Clinton announced her campaign earlier this year, Carville has made the rounds on talk shows to downplay her burgeoning email scandal.

Carville has dismissed the scandal in characteristically peppery prose, calling it “a pile of garbage” that “won’t amount to a hill of beans.”

How you know Hillary Clinton is in trouble: Carville called in to attack

I’ve been on assignment this week, and I still have not totally wrapped it. But I can’t let the week in media and politics end without commenting on Team Clinton going down to New Orleans, opening the coffin and taking the stake out of the heart of James Carville, the Count Dracula of attack spin doctors.

If I didn’t know Hillary Clinton was in trouble before I saw Carville, I do now.

What a screwball performance Carville delivered – complete with crying like baby to show his depiction of press coverage of Hillary Clinton, particularly the Washington Post…

The crying-baby imitation and repetition of the phrases “don’t amount to a hill a beans” and “stupid media people making stuff up” are all vintage Carville. Only now he’s lost the rhythm of attack and the ability to make his words sting. He’s become a parody of the media pointman of Bill Clinton’s once-feared media takedown machine.

Maybe he’ll get his game back. But Carville seems nowhere near winning campaign form right now.

If Hillary Clinton is somehow elected president, we’ll be seeing more of Carville.

Won’t that be great?

Any candidate who allows the old guard types from 20 or more years ago to be their face will never impress the growing numbers who have a fever to change things. Throw Karl Rove into that bunch as well as maybe Michael Murphy, among others.

If Sanders or Biden start putting some of the younger progressive faces out front that are Obama-ites (like that annoying jerk Tommy Vietor) Hillary is even further doomed. It may not help to have such partisans on board during the final stretch, but it will certainly help charge up the now dormant Dem bases. Just like Trump is doing now.

Would you rather be locked in a room for 24 hours with James Carville, Tommy Vietor, or Karl Rove — OR — be stripped naked, slathered with honey, and tied to a stump in the Amazon rain forest?

In a “Two men enter, one man leaves” scenario?

I’ll take the first option, because in the first 5 minutes they would be wetting themselves and afraid to speak.

I would actually very much enjoy having the opportunity to pick Carville’s brain for 24 hours. Regardless of his political beliefs, in the past he was an amazingly effective spokesperson, mouthpiece and political consultant.

Remember, there is a LOT that the opposition can teach us about tactics. The fact that to date we have been too polite to USE said tactics does not mean that we should not LEARN them (both for potential future use OR in order to develop strategies to counter them).

I don’t find Carville particularly brilliant. His tactics are very simple – deny the accusations, denigrate the opposition, refuse to acknowledge facts. This is SOP for all Leftists, nothing special about it.

My “Progressive’s Four S’s”:
Silence critics – critics are simply not allowed to speak in any forum controlled by the Left
Slander opposition
Suppress internal dissent – independent thought within the Left is not tolerated
Suspend free speech – dictate rules for speech that preclude an honest discussion of the subject in controversy

I should add a fifth “S”: Stonewall facts – under no circumstances should facts contrary to an agenda item be acknowledged, or, if possible, even permitted to enter the conversation.

All true. But there IS an art to it. And while it may not be pretty, Carville is certainly an artist with a practiced hand.

I wish some media moron would actually use their Lexus-Nexis subscription to track all the lies Carville has told for the Clintons over the years. Well, not all – a few dozen would be enough to confront him with, and totally defang him.

Instead, they invite him on, with no experience or qualification other than having been a political hit man, and treat him the same as they treat congressmen and scientists. Even political columnists have more claim to objectivity than this flack, yet he is treated equally.

Remember Carville worked for candidates of both parties until he came to Clinton’s attention by getting idiot-boy Harris Wofford elected to the Senate from PA on a national health-care platform. He was brought on to promote HillaryCare more than anything else.

His willingness to lie and defame opponents in a Cajun voice was just a bonus. Oh, he loves ObamaCare, too. And Wofford was defeated for reelection by Rick Santorum, but Carville remained on the national scene. Just one more way America lost with the death of John Heinz.

I thought the juxtaposition of the Monkees and Carville was really very apt.

Fake, over-hyped, entirely a media “thing”, but effective in their respective days. It made me all nostalgic there for a minute.

As a old Monkees fan, I take umbrage with your comparison of them to James Carville.

I can see your point.

I was thinking more along the lines of teenagers capable of critical thought, for whom both the Monkees and Carville were objects of derisive laughter.

Teenagers capable of critical thought? You must be talking about home-schooled kids.

Back in the day, I’d rush home so I could goof on the Monkees.

If you ever run for office, you should expect opposition posters photoshopping your face over Davey’s or Mickey’s. Just remember you heard it here first.

Maybe, but if you threaten them with Carville, they damn sure eat those vegetables.

HRC is fighting on too many fronts at once for the likes of Carville to be of much benefit. Rabid attack dogs aren’t going to keep the money from flowing to Biden if he decides to run. If the WH decides to back anybody other than Hillary, she’s simply done. Big donor money will change direction and the already steady drip of damning Clinton revelations will just intensify until she pulls the plug. If she remains stubborn the Dems will eventually yank a few skeletons out of the Clinton crime family’s closet. The Clintons are so severely flawed you’d think that closet has no back to it. Whatever it takes to finally push the Clintons into a permanent political retirement. Carville’s just taking a bit more of the Clinton cash while it’s still available. Carville can’t even begin to fix what Hillary has broken.

Do you ever wonder about the personal and intellectual requirements to wear that label for either establishment party? Perhaps one must self certify that he lacks certain traits except for a thirst for money and/or power.

As a campaign advisor Carville had one bright moment back in the GHWB presidency when he correctly predicted a US Senate race would turn on a debate about health care. Since then t all he has ever contributed as a campaign adviser has been the willingness to be nasty.

Taken together, those are invaluable in a Collectivist apologist.

But his day is past…poor old thang.

Nastiness has won a lot of primaries AND elections even recently. Look as how nasty people were about Romney. Like him or not, you have to be worried when someone like him can be painted with all kinds of evil motives that actually STICK.

Slight counterpoint – a lot of that would not have STUCK if Mittens had fought back or attacked Jugears. His “I don’t want to be a dirty campaigner” attitude turned off millions who figured if he didn’t care enough to fight for them, then why bother voting for him. That’s why he lost. Remember, that disgrace McCain got more votes than Mittens and that was before the tea party explosion of 2010.

We really should have a little compassion for poor old Serpenthead. He’s married to Mary Matalin, who was a prominent GOP pundit years ago.

Morning coffee must be quite the experience at the Carville house. Coffee and orange juice, spiced up with Mary’s GOP snark about donkey party losers. No wonder he’s glad to get out of the house.

Skeletor has risen from the swamp. Again.

The Monkees made good swim party music. This is a positive contribution to society.

Oh, look, Smeagol is back.

Hillary is his Precious.

Do you think he actually kisses his mother with that mouth?

Carville has no mother. He was raised up out of the bayou in a satanic ritual conducted by a voodoo priestess.

To Carville, we’re all just nasty hobbitsies. The good news is that he will keep the one ring from Sauron’s clutches for a few decades.

Nasssty, tricksy hobbitses we are. 🙂

Wow. For some reason I’m flashing on Trump as Boromir.

…I think I need a beer after that one.

He has always reminded me of one of those hairless cats, like Dr. Evil had.

Wonder if he’ll address the Enquirer article about huma sleeping in the same room as hitlery to keep check on her MS, black outs and other health problems?

But other sources claimed Hillary has suffered three secret strokes, and she’s flat-out lying about her failing health!

“Let’s face it, Hillary has had a problem telling the truth her whole life. She’s always exaggerated how good or bad things are to suit whatever image she wants to project on any given day,” an insider dished.

“When it comes to her strokes there’s stony silence! She wants to make believe they never happened!”

Out on the campaign trail Hillary’s energy level “seems good so far,” confided another close source.

“But behind the scenes she appears exhausted, dazed and confused at times.”

Her most trusted aide, Huma Abedin, even sleeps in her hotel room to keep an eye on her “in case there’s a medical emergency,” the insider explained.
—————–

That’s not exactly the reason I thought they slept in the same room.

If the rumors are true checking vital signs is about all Huma can accomplish right now.

No matter what Carville says of does, the American people have arrived at the conclusion that Hillary Clinton is a lying ratbag.

“Republicans want to repeal the Constitution” was the giveaway that tells you how far past his sell date this guy really is. It’s as if he’s been cryogenically frozen since 1998, Austin Powers style.

Hey James, FYI: repealing the Constitution is your party’s raison d’etre these days. Let’s run through a few key concepts:

Separation of powers? NO
Limited and enumerated powers? NO
Free speech? NO
Religion? NO
Guns? HECK NO
Fair and equal application of justice? ARE YOU KIDDNG?

He may as well throw on an NSYNC t shirt and a fanny pack to complete the picture.

So Hillary plays her ace in the hole. And there’s no bigger ace hole than Carville…..