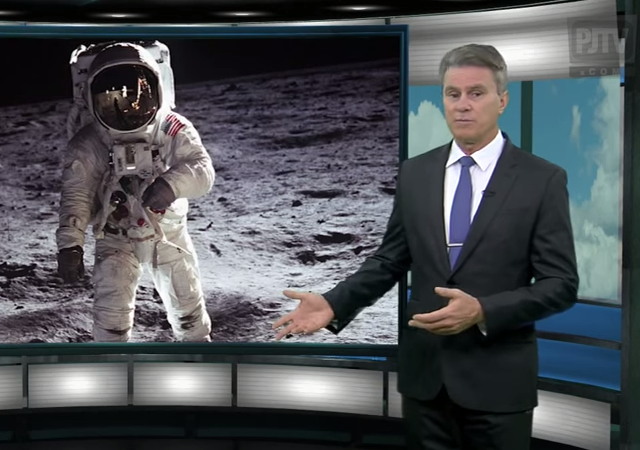 In the newest edition of Afterburner, Bill Whittle examines the dumbing-down of American society with an eye to the causes, effects and possible solutions.

Whittle opens by noting that conspiracy theories about the moon landing and 9/11 have become mainstream. He goes on to explain the difference between ignorance and a lack of education.

One of the points Whittle makes, truly jumps out. He talks about a photo of Steven Spielberg on the set of Jurassic Park next to a dinosaur which went viral after the Cecil the Lion story.

Surely, there aren’t people in this day and age who think the moon landing was a hoax, right?

In July, Buzz Aldrin celebrated the anniversary of the Apollo 11 moon landing on Twitter.

Look at these two responses:

@TheRealBuzz @ProfBrianCox Why has no country attempted to put a man on the moon!? Maybe Because it’s not possible! Wake up people!

Bill Whittle is right. We have a lot of work to do.

In the movie “Interstellar”, the authorities revised the history books to call the moon landing a big hoax.

That was one of the many problems that terrible movie had. We’re supposed to believe we’re far enough into the future that no one is left alive to remember that we’d landed on the Moon (in order to get people to accept their lot as farmers), but everything in the world looked like 2014; the cars, the technology, even the spacecraft. Other than TARS and CASE, the world looked like now but had to be something like 2065 or later to ensure very few oldsters remembered history.

Of course, this is how the Left will eventually triumph on recasting Pearl Harbor as a defensive attack against American Imperialism as they tried to 20 years ago at the Smithsonian. Eventually all the veterans will die off and the unlearned herds will mooo quietly as history is rewritten to fit the Left’s America-hating narrative desires.

They say history is written by the victors. No, it’s written by the writers. If the facts displease them, they’ll change them. It may take time to get away with unnoticed, but same as what the Islamists taunt us with: We may have the watches, but they’ve got the time.

Media has many people in its thrall.

Consensus as we have seen is a correlative of Democracy which is not necessarily right in its assumptions.

I put moon landing truthers right up there with the 911 truthers!

How can we prove that it’s possible to go to the Moon when NASA claims they can’t repeat the feat in under 20 years? (And, personally, I wouldn’t trust them to make it in anything under 50)

Apollo’s 11, 14, and 15 left laser reflectors on the surface of the moon. You can bounce laser beams off them to measure the earth-moon distance.
https://en.wikipedia.org/wiki/Lunar_Laser_Ranging_experiment

Oh, well. Still don’t see why Whittle doesn’t include a transcript for those without the inclination to sit through a video. I can read several posts and comments (if not too many, like a Trump topic) in the time it would take to watch the thing.

I watched one of his once. I could have scanned the essential points in under a minute if it were text – skipping over the fluff. No thanks.

In his early days Whittle was quite a windbag; it took forever for him to get to a point.

The good news is, he’s improved quite a bit since then. He doesn’t spend so much of his (and our) time wallowing in pure fluff.

Still, I’d prefer a transcript, myself.

go look up some of Bills earlier work from the Eject, Eject, Eject days and try to produce something one tenth as educational on your best day before you take another hack at Mr. Whittle … you are a perfect example of a know nothing moron …

My personal story backing up his point:

My daughter started high school, freshman year, with a “General Science” teacher who was TEACHING THE CLASS that the moon landings were a hoax!!! We got her transferred out of THAT class quickly (and by having her take and pass a VA SOL, into honors math and science classes – after homeschooling her K-8th grades).

Thankfully, she had a solid foundation, so the nonsense this teacher was feeding those poor students was a joke, nonsense, to her. But those other kids BELIEVED IT! When I mentioned it to the science dept. chair, she said “she’s free to add things into her class as long as she gets all the mandated requirements in…..no concern AT ALL.

Indoctrination is NOT education. Scary times we live in……….

My favorite “proof” that the moon landings were faked is that there are no stars in the sky behind the astronauts on the surface. “On a body with no atmosphere, the stars should be very bright and obvious, but they’re completely missing!”

Test this theory. Take a photo of yourself outdoors with a flash on a starry night. The flash is the equivalent of the sun illuminating the astronaut on the moon’s surface. See any stars in the sky behind you? No, you don’t. Because the difference in brightness between the flashlit (or sunlit) subject and the stars is too great for the camera (or film) to handle, so one of them must go. If the subject is properly exposed, and because the stars are far dimmer than any sunlight object or ordinary albedo (reflectance), it’s the stars that have to go!

Your mistake was believing that today’s government indoctrination facilities exist to educated students like when we were kids. Nope, nowadays they’re there to be trained to look for the picture of the donkey and the letter (D) when they vote because those are the nice people who want to give them stuff, not the meany pants other people who hate puppies and the poor and rainbows and want to destroy the planet and…

Thing is, the children of privilege aren’t really being taught better than us serfs because they go to Oberlin and Brown and Vassar and demand safe spaces away from triggers because they’re fragile snowflakes in a patriarchal world of oppression.

This is why the Russians, Chinese and Islamists will eat us alive and rule the world, while these dolts whine about how the Koch Brothers are to blame. Or something.

Yup. A couple more generations and the U.S. experiment will be a memory.

Don’t need to wait that long. We’re being eaten alive today by uneducated Mexicans and Salvadoreans.

There have been a multitude of Homosapians in each of the 9000+ or so generations since we showed up on the planet as a species who are dumb as a post and/or incurious and/or prone to irrationality, etc etc etc…

The generations alive today are no different.

What has happened since I went through school is intentional progressive under-teaching rewritten curriculum designed to create peons, basically, who can be managed by central planning.

Teachers unions, which didn’t exist when I went through the system, is the conduit from socialist planners.

Not teaching children to read and write cursive is a prime intentional example.

Who remembers Trayvon’s girlfriend being interviewed on CNN and her testimony during the trial?

What was done to her and millions of others is a crime against this nations and it’s citizens.

“Who remembers Trayvon’s girlfriend being interviewed on CNN and her testimony during the trial?
What was done to her and millions of others is a crime against this nations and it’s citizens.”

Spot on. Unfortunately the stupefying effects of the Progressive machine are so successful that its victims are rendered so stupid that they are incapable of recognizing its effects, and lack the intelligence to raise objections to their treatment. You have to admit, it’s pretty slick – render an entire generation of self-propagating slaves who have been bred specifically so as to be incapable of realizing their condition.

Well, she WAS able to recognize that something was “real retarded.” https://www.youtube.com/watch?v=-dFpoTDREPg

It as the Russian space walks around 1967 that were the hoax, not the moon landings.

And maybe not even that the fact of the space walks, but the filming was the hoax.

Correct on the second count, Sammy. The Russians did make the first space walk, but it was so nearly disastrous that they later faked it to provide proof of their accomplishment. Unfortunately for them, the spoof backfired because it was easily discovered, and led to the near-universal belief that the space walk never happened. They would have been better off playing up “the brave Soviet cosmonaut who nearly lost his life in a daring mission to advance science,” but they had such an inferiority complex that they were incapable of revealing their even their near-failures. (This Russian trait led directly to the accident at Chernobyl. The operators there caused a disaster because their superiors had never taught them of the dangers posed by certain actions in such nuclear facilities – dangers that had made themselves apparent in earlier accidents that were hushed up. The operators at Chernobyl didn’t know that what they were doing was unsafe because they had been lied to about the capabilities and limits of the reactor they were responsible for running.)

Science and math in public education are abysmal, have been for decades. Each year kids are taught more what to think (indoctrination) than how to think. There is a bounty of curiosity, exploration, research, and the scientific method, which, conducted properly, lead one to the truth. Can’t have that.

The federal Department of Education must be eliminated; states must have complete control over their schools.

Correction: “There is a bounty ON curiosity, exploration…. “

Want to see a movie of modern America? Watch “Idiocracy.”