Demonizing Police and empowering hoodlums works like a charm, every time 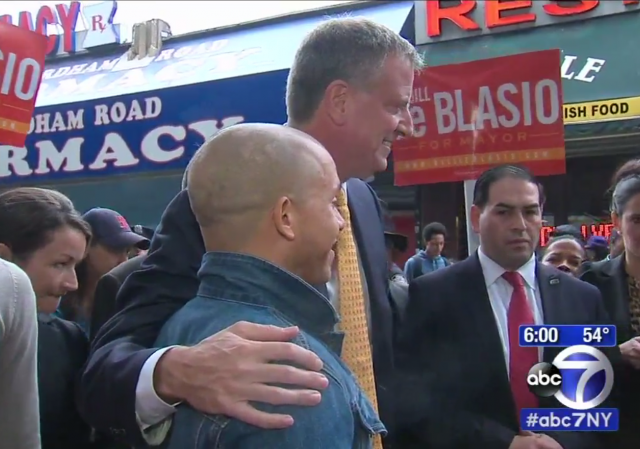 Under Democratic Mayor de Blasio’s tutelage, a crime wave has settled over Manhattan’s iconic green space. Beleaguered by muggers and other hoodlums, Central Parks is no longer the safe haven in the middle of Manhattan that it once was.

With no substantive ideas or plans to curb the sudden onset of violence, Central Park’s degeneration seems be an indefinite, yet completely preventable misfortune.

The New York Post has chronicled the increase of criminal activity in NYC’s beloved park where muggings have doubled from this time last year.

There were 15 misdemeanor assaults between Jan. 1 and July 26 of this year, as opposed to 11 for the same period last year.

And narcotics arrests in the park have more than doubled this year.

There were 23 drug busts between Jan. 1 and July 26 of this year, as opposed to 10 for the same period last year.
Still, the number of criminal summonses has taken a nose dive, Perhaps pointing to more lax enforcement if such quality of life offenses as loitering, disorderly conduct, or public drinking and urinating.

But during the same months of last year, they wrote 3,026 summonses.

July saw an uptick in reported muggings. One thief made off with a purse full of dog treats while another punched a woman in the face in order to steal $1. A man was mugged at knife point. In a separate incident, an elderly man was held up and robbed by a gun wielding criminal.

It took a brutal attack late Thursday night for the media to call the rash of muggings what it is — a crime wave. Thursday, a apparent homeless man choked until he blacked out. Once passed out, the choking mugger robbed the man and took off.

Police are searching for a suspect in connection with a robbery in Central Park late Thursday night.
The victim in this latest attack is a 53-year-old man.

Police said he was walking through the Ramble area of the park by West Drive and the 79th Street Transverse around 10 p.m. when the suspect approached him, said he was hungry and asked for money.

When the victim said no, the suspect choked him until he passed out, CBS2’s Ilana Gold reported.

When the victim woke up 20 to 30 minutes later, his wallet and backpack with cash, keys, gift cards and jewelry were gone, police said.

The victim went to the hospital the following day to get checked out.

So where is law enforcement in all of this?

NYC’s finest have said repeatedly that “Stop and Frisk” is essential in keeping violent crime at bay. They’re also requesting more boots on the ground.

Mayor de Blasio disagrees. In June, de Blasio instructed cops to reduce the use of “Stop and Frisk” and said New Yorkers had no reason to worry about crime.

Mayor Bill de Blasio disagrees with the police union and is insisting the NYPD can fight crime without more “Stop and frisks”.

“New York City continues to be an extraordinarily safe city, the safest big city in America, that is clear,” Mayor de Blasio said.

The mayor late Tuesday said New Yorkers have no reason to worry about crime.

But video from Sunday in Bedford-Stuyvesant tells another story, although overall crime is down 6.5%, but violent crime is way up.

Last year by the end of May there were 113 murders.

“The perps on the street are getting bolder because they’re not enough of us and they’re not being stopped so I’m not surprised that the shootings are rising,” said Pat Lynch, PBA President.

Tuesday Lynch blasted the mayor, saying the city needs to hire more cops and let them do their jobs.

He faults the reform of “Stop and Frisk” and new rules on cops as key components for the uptick in crime.

Was Blasio dropped repeatedly on his head as a child?

Of course the police union president will always call for more cops no matter what happens, and will always blame any bad thing that happens on a lack of cops, so one must take what he says with a generous helping of salt. And the NY Post is not exactly a beacon of journalistic excellence, so the same applies to it. Still, the facts are what they are, and anyone who thinks our communist mayor is not to blame needs to explain them.

I wonder if di Blasio has had “the talk” with his mulatto son regarding concerns he should have about blacks while walking through Central Park, similar to “the Talk” he had with the boy about being wary of all cops anywhere because of his skin color.

Police unions are bands of thuggish hoodlums themselves. And now they’re blackmailing, saying that if we can’t thug the way we wanna thug, we’re not gonna do jack shit…. but of course we still demand our generous taxpayer funded salaries and benefits packages for just sitting here on our asses pouting.

Yeah De Blasio is socialist scum. But the police unions are scum too, I don’t know why they have such a big fan club among conservatives. If it was a teachers union demanding they’re pay and benefits but refusing to do they’re job, we wouldn’t be cheering them on like this.

The stoppage of stop and frisk is the result of a law settlement the city made, cooperating with an activist liberal judge. However politically rancid the choice not to ‘fight’ the adverse ruling, it is the law of the land, and it is not the job of police officers to stop and frisk in violation of that settlement.

And, like Baltimore, the Libs have declared an all out war on businesses and white people. And blacks thrown in for good measure. Louis Farrakan is their hero.

Not cheering them on. Schadenfreuding. The rule of law is gone in this country, even away from Democrat run polities. The veneer of civilization is always thinner in larger urban areas. They had a system that kinda-sorta worked to keep the veneer in place. They deliberately choose to destroy it. And they voted to install a regime determined to destroy it.

If they want to live in “Gotham City”, let them. It is not like it is part of America, anyway.

“If they want to live in “Gotham City”, let them. It is not like it is part of America, anyway.”

Keep telling yourself that whatever backwater hellhole you’re from is more “American” than New York. OK.

…and we know it’s just got to be true, because CBS said so……

You just proved his case with your reply, you dipstick.

I guess the stereotype of New Yawkers being dimwitted, lockstepping lemmings is true.

New York will be the great American city it once was, as soon as they get rid of de Blasio, and get a mayor with integrity.

Oh, yes, because we ALL know that America ends west of the Holland Tunnel and south of Long Island.

There were 10 muggings through the first 7 months of last year, and 20 this year. Two points:

For some perspective, approximately 20 million people visit Central Park during the course of the first 7 months of the year. The number of muggings is very small in comparison – even with the year-over-year increase, it means that getting mugged in Central Park is still a one in a million thing. Hardly a “crime wave.”

Second, the Post does not say what the numbers were two years ago (or in other previous years). Was last year’s number an anomaly? Is this year’s number? Point is, just looking at one set of year-over-year numbers is useless, especially with the small numbers involved (where one or two additional muggings makes a significant percentage change).

Bah! Format fail. Accidentally posted before I even previewed too.

Really. Let’s see you walk through the park.

The FIRST thing that this Collectivist idiot did in office was hose his own police, including the poor LEOs tasked with protecting this crazy family.

Collectivists HATE police. They have since the 60s. This is as predictable as Senor Sol rising in the East!

It is good DeBlasio sent all those carriage horses off to the glue factory farm (for the benefit of one of his pals who wanted a new parking garage where the stables were), because it is getting dangerous in the park!

The horses are still on the job. That never happened, because it was pushed back.

They must have found Bill at Dollar Tree – in the marked down bend – then……..

I guess the perps along with the progs now comprise the majority of NY’s voters.

Look for the return of wilding in Central Park.

You asked for it, you voted for it, and you got it. Enjoy the Commie in Gracie Mansion, NYC!

You ain’t seen nothin’ yet!

This sort of thing feeds upon itself, grows and festers. It’s like bread on the counter with a spot of mold. In a short time, the mold takes over the bread.

DeBlasio is all about empowering the mold.

DeBlasio is the mold….where did the Dem’rats dig him up?

The erstwhile Warren Wilhelm, Jr. (since rebranded as “de Blasio”), a disciple of the vile and incompetent Dinkins, has learned his master’s lessons all too well…

In fact, he has had 3 different legal names:
http://www.nydailynews.com/news/election/de-blasio-names-de-blasio-article-1.1463591

He’s about as genuine as ‘Barack Hussein Obama,’ (or whoever he really is.)