The US State Department has problems.

Whether we’re talking about major, deadly problems like the Benghazi scandal, or their mere inability to keep it together for a press conference, you can always count on State to show time and again what it means to achieve mediocrity at the highest levels.

There’s mediocrity, though, and then there’s plain disregard for the welfare of the human race.

Every year, the Office to Monitor and Combat Trafficking in Persons (J/TIP) puts out a report publicly shaming the worst offenders in human trafficking. The results are no small deal; it may flow from a US agency, but the report is used worldwide as other governments and organizations attempt to balance their interests with the overall goal of improving human rights and putting an end to human trafficking.

Correction—we say we have that goal.

An independent investigation by Reuters has revealed that this year’s J/TIP report was willfully manipulated by diplomatic officials to better address the current geopolitical climate.

Officially, J/TIP is an independent organization. It exists in a different building, has its own staff, and makes its own recommendations. However, diplomats and other officials with skin in the game have the ability to influence the final rankings, which is what happened here. J/TIP disagreed with diplomatic outlets on 17 total rankings; of those 17, J/TIP only won out on 3.

Reuters put together a chart showing discrepancies in what J/TIP recommended, versus final rankings: 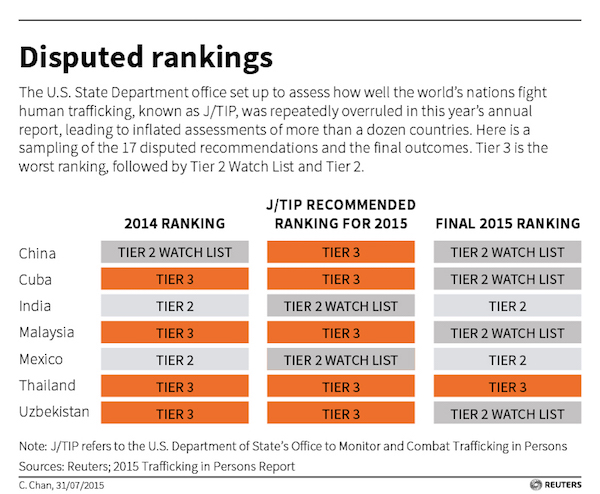 According to J/TIP, Malaysia and Cuba maintained their status quo; in China, things got worse—but you’d never know it by reading the final rankings.

If you’ve ever watched a session of the United Nations Human Rights Council, for example, you know how tense and politicized humanitarian issues become. Not only do representatives of countries known for violations not want to talk about them, they repeatedly attempt to wipe the record of any mention of those violations. It’s politically inconvenient for officials attempting to vote-trade or otherwise cut deals to have NGOs and other independent organizations pointing out what politics and money is usually so adept at covering up.

Same basic principle applies to the J/TIP report. When diplomats prioritize relationship-building over candor, worlds collide, and those who have fallen victim to their own governments pay the price.

Via Reuters [emphasis mine]:

“There is supposed to be some deference to the expertise of the office,” said Mark Lagon, J/TIP’s ambassador-at-large from 2007 to 2009 and now president of Freedom House, an advocacy group in Washington. If the office is now losing more disputes over rankings than it is winning, that would be “an unfortunate thing,” he said.

Most U.S. diplomats are reluctant to openly strike back at critics inside and outside of the administration who accuse them of letting politics trump human rights, the sources said.

But privately, some diplomats say that J/TIP staffers should avoid acting like “purists” and keep sight of broader U.S. interests, including maintaining open channels with authoritarian governments to push for reform and forging trade deals that could lift people out of poverty.

If there’s a gray area for slavery, you can count on our State Department to find it.

Obama’s Democrat Party – Bringing back Slavery in all its forms……

It was Democrats who put together the KKK. I wonder how Obama would look in a white sheet.

Vanity Fair wants you to know that Obama outfit was just smashing with his red high heels and red handbag!

“An independent investigation by Reuters”…. You were laughing when you wrote this line, right, Amy?

Officially, J/TIP is an independent organization. It exists in a different building, has its own staff, and makes its own recommendations. However, diplomats and other officials with skin in the game have the ability to influence the final rankings, which is what happened here. J/TIP disagreed with diplomatic outlets on 17 total rankings; of those 17, J/TIP only won out on 3.

So, Amy, based on your “however”, what do you conclude about J/TIP as an organization? Given your title, what sensible conclusion can you draw from State’s influence on J/TIP?

That quotation would seem to arguing that J/TIP is in fact an independent organization – it was officials outside J/TIP who changed the rankings.

Now maybe it still bears the imprimatur of the Office to Monitor and Combat Trafficking in Person, but they didn’t have the final say, or didn’t want to disagree. It says there were some 17 arguments, and they won only 3 of them.

Higher level officials maybe only pressured them on their final rankings, but obviously there’s a risk this will work its way down. Except that if it does, the whole thing will have no credibility with Congress,or anybody else.

This doesn’t bode well, by the way, for the willingness to call Iran out on any violations.

If an ‘indpendent’ org can be manipulated so fully from without, it is not an independent org.

This is too complex a concept for some writers.

Everything in Central City is political.

For your enhanced pleasure…

The New York Times had an editorial about this on Friday, with special emphasis on Malaysia:

Every department and agency of government under Obama is manipulated for political reasons.

The main difference between Obama and Stalin is Obama can’t count on the Army to back his play for dictatorship.

What happened here is exactly what should NOT but usually does.

This is nothing less than corruption of the assessment.

All you need to do is look at that list. Note that increased violations were ignored when it conflicted with this administration’s “broader policy interests.”

And apply the some formula to the Iran nuclear deal.

One thing that may have slipped by due, to the spectacle of watching an administration send official after official to testify before Congress to sell a nuclear accommodation with the world’s leading state sponsor of terror using talking points originally written in Farsi in Tehran, is that the Obama administration has also appointed itself the Mullah’s attorney and defended it against any IAEA accusations of cheating at the UN.

So we can expect them to turn a blind eye to Iran’s continuing violations of the nuclear accommodation as acknowledging those violations would diminish Obama’s “broader policy interests” of diminishing and wreaking havoc on the United States.