Your weekly dispatch from the world of higher education. 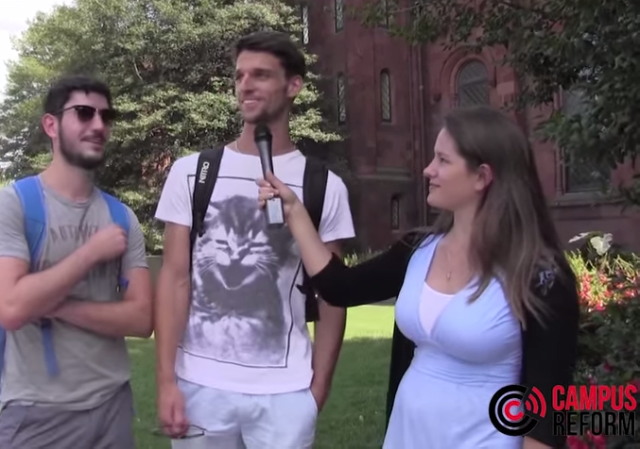 These students shouldn’t feel bad. The chair of the DNC couldn’t answer the question either.

Free speech is such a hassle.

Someone should make a rule about certain words.

This week’s history lesson is brought to you by Prager University.

Is racism really a big problem in higher education?

How can you say that so emphatically when the overwhelming majority of Rebel troops did not own slaves?

Remember – the South with 1/3 of the population was paying almost 80% of the cost of the Federal government. General economic exploitation was clearly a base issue. Remember that some slave holding states stayed with the Union.

And – it is important to remember who invaded whom? South Carolina peacibly took possession of all Federal properties. But – when the Northern Troops secretly re-occupied Ft. Sumpter – the State saw that as the beginning of an invasion and an attempt to takeover Charleston Harbor. That Invasion triggered the Civil War.

Also, North Carolina which had no succeeded – was pushed to leave the Union to support the armed invasion of South Carolina.

There’s no way to answer this question without admitting that the North was fighting to crush a culture.

I do not know who this MENSA is in the uniform but if puts all of his eggs into the newspaper editorials of the time he would be laughed at today. All one has to do is to look at the editorials in today’s newspapers top see how unrepresentative they are to the citizens that read them. I live in Atlanta and the AJC does not represent the state of GA any more than most papers represent their states opinions on most issues. I am a fourth or fifth generation Southerner and no one in my family on either side ever owned one single slave. To me the issue is like the Trump issue with the RNC, I may not be for Trump but I don’t think he should be bullied by the RNC. The South was the same way. People in the South might not have agreed with slavery but they sure as hell didn’t want the bullies in DC to tell them how to run their states. If you had lived here in the 1860’s and your state was invaded I’ll bet most of you would have fought for you people and state over some ideological issue that did not even affect your daily lives.

If one wishes to understand the root cause of the civil war, it will not be found in the “press” in the USA. Look at the European papers for your answers.

Having said that, there were multiple reasons and had slavery not still existed in the south, it would probably not have occurred. But the root was economic.

Which side had as it’s leader, family still in the slave business?

Which side had as it’s general (end of war) a former slaveowner?

Which general owned slaves most recently?

Bonus question – Where did the “underground railroad” end and why did not end in a “free” state?

He also neglected to mention that a strong plank in the Republican platform was a steep rise in protectionist tariffs that transfers revenues from the agricultural South to the Industrial North either by paying those tariffs or the increased cost of Union goods. The Republicans were also committed to strong public works projects mainly centered in the North.

I believe that slavery played a large part in causing the war but this Prager episode was not one of his better ones.

Not all blacks were ever slaves, so no war was necessary for them to be free. Not all southerners owned slaves. Not all slave owners were white. Not all northerners supported freeing the slaves. The civil War didn’t stop Americans from owning slaves if those slaves were kept in the carribean. We seem to be constantly fighting and re-fighting the issues which lead up to that war. Did the south have a right to leave the union for any reason? Did Lincoln have any right to prevent any state from leave? Could slavery been ended without a war? The end result of the war was to deprive all blacks of the freedom that some had always had when the segregation laws took hold.

Karl Marx is said to have avidly followed the civil war daily in the London rags.

The Uncivil War was about tariffs on imported goods.

A smoldering issue of unjust taxation that enriched Northern manufacturing states and exploited the agricultural South was fanned to a furious blaze in 1860. It was the Morrill Tariff that stirred the smoldering embers of regional mistrust and ignited the fires of Secession in the South. This precipitated a Northern reaction and call to arms that would engulf the nation in the flames of war for four years.