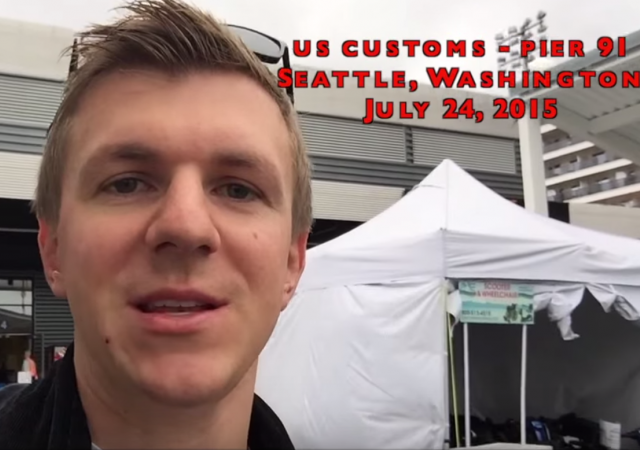 The last six times he re-entered the United States, he’s been detained and questioned by CBP officials. The last two times, he recorded his interactions with Customs and Border Patrol.

His border videos likely embarrassed DHS officials. Some questions asked by CBP are valid — he does have a history of entering the United States without inspection after all. Detention and secondary inspection aren’t entirely unwarranted given the circumstance, but some of the questions tossed at O’Keefe are simply bizarre.

“Who do you think is going to win the Republican primary?” “Would you really support Trump as a nominee?” How are these questions congruent with CBP’s task of securing our borders?

O’Keefe was able to peek at the CBP officer’s screen during his last attempt to enter the United States. He learned he’d been flagged as an, “amateur reporter engaged in publicity stunts.”

It’s one thing to ask questions about intent and how an individual’s activities might be detrimental to the homeland. It’s quite another to detain a private citizen with the sole goal of avoiding federal agency embarrassment.

Author’s Note: The Author worked with James O’Keefe and Project Veritas as an Investigator and Project Manager in years past.

Customs should be about the collection of duty taxes. Ask him if he has anything to declare, search his bags for undeclared items and move along.

Immigration is about non-citizens entering the country. Examine his passport as proof of citizenship and move along.

I am sorry for being the bearer of bad news, but that America is now long gone.

Now each and every government agency is a political tool, no wait, a political weapon that the executive can use against rivals.

Whoa whoa whoa! What do you mean by “non citizens?” That seems like a very racially-charged term to me. What are you, sort sort of racist xenophobe?

If we could only fire every useless federal employee, we could balance the budget right away.

Fire the useless? That’s at least 50% of federal workers, Estragon.

Starting from the top.

Not going to be popular here, but I can see flagging him for a more thorough check to make sure he’s not smuggling anything in so he can broadcast that he got by them.

Some of the questions he was asked, though, should not have been asked in an official capacity.

If they want to check him for smuggling, then check his bags and make sure he isn’t. Why in the world would it matter what his job is or what his next story will be, or which candidate he supports?

He snuck across the border twice and publicized the incompetence of these clowns to do their jobs. Now they’re pissed because everybody knows exactly how incompetent they are and they want to get back at him. That’s completely understandable, and also completely illegal. They’re supposed to be enforcing the law, not breaking it, and now they look even more incompetent. Trying to defend their actions is just more hypocrisy.

I can see flagging him for a more thorough check to make sure he’s not smuggling anything in so he can broadcast that he got by them.

In other words, they’re habitually flagging and detaining a private citizen with the sole goal of avoiding federal agency embarrassment, just as Kemberlee suggested.

And you’re okay with that?

I wouldn’t call James O’Keefe an “amateur” reporter. Who got ACORN defunded?????

Should Customs and Border Patrol detain American journalists? Absolutely. Journalists like to imagine that there’s a special exception in the constitution, just for them. They’re taught at their trade schools that “and of the press” in the first amendment means them, that they are singled out from among all people for special status. They’re told that they’re a branch of government, a “fourth estate”, although not one in twenty of them can name the first three. (How many here can name them, without looking them up?) But it ain’t so. “Freedom of speech and of the press” simply means the right to say what one likes, whether in speech or in writing. Nowadays we cover both with the term “freedom of expression”. Journalism is just a trade like any other (no, it’s not a profession), and practising it doesn’t entitle anyone to sail through customs and immigration without the same scrutiny they would get otherwise.

And yes, malclave is right, given O’Keefe’s history they’re right to worry what he’s up to, and to look at him more closely than they might otherwise do. But not to the point of harrassment. And those political questions are way out of line, unless the agent made it clear that he was asking in a personal capacity, just to satisfy his own curiosity.

given O’Keefe’s history they’re right to worry what he’s up to, and to look at him more closely than they might otherwise do.

And you say this because you truly believe that James O’Keefe is a real and present danger to the security of the United States of America, or because you’ve grown to accept that the State has the right to target for harassment any citizen who might embarrass the administration?

P.S. Are you still claiming to be a libertarian?

Of course he isn’t any kind of danger to the USA. Since when does that mean he shouldn’t be looked closely at when he enters the country? Given his history, it’s reasonable for an agent to worry that his next film might be “look what I brought in to the country right under DHS’s noses”, and to make sure it doesn’t happen on his watch.

Looking closely at someone is not harrassment. I explicitly wrote that they would not be right to harrass him, so your claim otherwise is an outright lie. I demand an apology.

And I don’t just claim to be a libertarian, I am one. You are an idiotarian.

And as far as I know O’Keefe makes his living from reporting, which by definition means he’s not an amateur.

So we can’t “randomly” select someone named Mohammed, Abu or Aladdin when entering our country, but if your name is James O’Keefe you get stopped every time because you could be trying something fishy. What a load of crap!