Scott Walker has a Question for the Fox News Debate Slate

Scott Walker has a Question for the Fox News Debate Slate

…how will they answer? 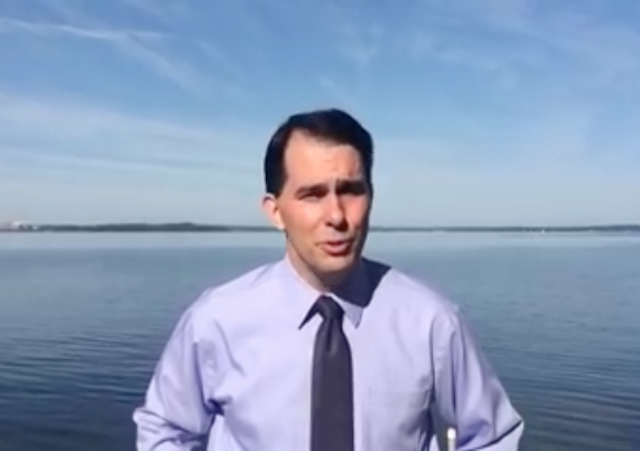 Tomorrow, ten Republican candidates will stand on a stage in Cleveland, Ohio for the inaugural debate of the 2016 cycle.

Personally, I’m preparing myself for a lot of nonsense in the hours leading up to the main event. So far, our slate of candidates has not held back on lobbing personal and political attacks; the national limelight isn’t likely to temper either the candidates’ desire to throw punches, or voters’ expectations that those punches will be thrown.

I’ve written quite a bit about how candidates are changing tactics both online and in the field in an effort to make themselves more approachable and “human” to voters; some candidates naturally come across as approachable, while others have needed a little help getting started.

Scott Walker is (I believe, you may disagree) one of those lucky few gifted with the ability to connect with a broad sample of American voters. His latest social media blip takes that approachability to the next level with a simple request that almost completely divorces itself from politics, and forces his competitors into the yet undiscovered world of—brace yourselves—personal relationships.

Scott Walker wants to know which candidate each of them admire the most—and why.

Take a look at his own response:

My Debate Question to GOP Candidates

The first GOP debate is tomorrow night in Cleveland, OH. I'm posing one question to all the other Republican candidates before the #GOPDebate.

For me, it’s Dr. Ben Carson. He performed the first successful surgery on conjoined twins.

Walker immediately fielded criticism in the comments on his Facebook page about his answer—what does this have to do with politics? The answer to that is both nothing, and everything.

Posing a question like this is good politics; his answer to it is great politics. If someone takes this question and uses it as a springboard for an attack, that person will look like a jerk; if they answer it appropriately, they’ll be playing Walker’s game. Plus, it’s unlikely he’ll be upstaged because he’s already cornered the gold standard of answers—I stand with the guy who saves babies!

Scott Walker is solidifying his position in this race as the strong leader and perennial decent guy. It’s not a tactic that would work for everyone, but it may just work for him.

I like walker and think he may make a good president. But he needs to ramp up the enthusiasm a little. Watching him answer questions is like watching Steven Hawking describe the inner working of a black hole. I don’t believe he could sell a ten dollar bill for five dollars.

You are invited to value content and achievement over style and promises.

And yet, somehow, he has survived in Wisconson, with a full-court press from the unions.

So you want a really persuasive salesman? Hey, the guy we have now conned most of the country into selling their souls to him cheap – twice.

You can have the big talker, the sweet talker, and the loud talker. I’ll settle for the quiet doer.

One wonders what “Silent Cal” would say. 🙂

Now, could we all agree on something, please?

Nobody is “debating”. Not. Nobody.

Is this ANY way to select a POTUS?

Well, how else can FOX milk Megyn Kelly’s face for ratings?

If Fox really wanted ratings, they’d tell Meghan Kelly to wear a low cut blouse. You know, sort of like they do with the young hotties on Red Eye.

Perhaps you have not noticed that Megyn’s face is the focal point of her beauty. All in all she is rather flat-chested and her legs are far too skinny.

Her skinny legs and flat chest are indeed repulsive: http://cdn.mademan.com/wp-content/uploads/2012/10/megyn-kelly-gq.jpg.

My, aren’t we cynical?

There hasn’t been anything resembling a presidential “debate” since Kennedy-Nixon, and even that was set up more like a joint press conference. Modern rules take debating out of it altogether, perhaps allowing the subjects to ask one question of one opponent.

I don’t like it either, but this is what we have and no one wants to hear my solution anymore (I’ll post it again at the end anyway).

I’m for Walker and I don’t think being the biggest blowhard is necessarily going to work. Of course, Hitler read about crowd psychology and then said the same things many others in Germany were saying in 1919 and onwards, but he said it with supreme passion. This worked for him. Let’s wait and see how Walker behaves as the campaign develops. I’m patient. I’ve made my pick.

I am NOT going to watch this extended Press Conference. It’s a sham and just pure BS. I don’t need a media ‘personality’ to tell me what issues are critical to me. I’d much prefer a Lincoln-Douglas style debate with no notes, no ‘moderators’ just a simple debate like we had in High School (before Critical Thinking was outlawed in Public Schools)

Yes, I too am tired of watching candidates spew out their pre-memorized talking points. I’d like to see a real debate, with each candidate standing over a trap door, and anytime a candidate doesn’t directly answer the question but instead launches into a speech on some unrelated topic, the moderator can push a button and “disappear” the candidate.

How can anyone think this wouldn’t turn into dropping Republican candidates into vats of jello while the Democrat, moderator, and audience laugh and point and mock?

The more I watch Scott Walker, the better I like him. This is indeed great politics.

For one thing, it is a reminder that all of the people involved in the “debate” are on the same side, even as they stand as competitors. I sincerely hope the candidates this time around do not make the same mistake as Mitt Romney did, by attacking Newt Gingrich. He looked stupid and dishonest, then, because he sounded like a Democrat. I hope these candidates do not sound like Democrats.

This is a terrific class of candidates. I favor successful former governors because I am from Texas, and I know that Texans train their governors to handle disasters, oh, like hurricanes and floods, and I assume other states do, as well. The Presidency is an executive office, and I like effective executives. Walker passes that test, as do most of the candidates, including Trump and Fiorina.

And yet, the Senators look good, too. Rubio was Speaker of the Florida House. Cruz was Solicitor General of the State of Texas. I admit I am less impressed with Sen. Rand Paul so far, probably because I know he does not know how to read legislation. And yet, he is clearly a principled Libertarian.

And, Ben Carson’s story is Lincolnesqe. That man catches my attention every time he speaks.

Would anybody agree with me that SW is a low key Chris Christe who gets his legislation agenda passed in his state without insulting anybody but his opponents. If he has half the success at the federal level that he has had on the state level our country would be immensely improved.

No way. Scott Walker is conservative while Christie is everything but conservative. Christie made his reputation beating up on the NJ teachers union but his showy attempt to hold the line on education costs has given way to bigger government involvement in N.J. schools.

If you dig into the Rush Limbaugh archives, you will find his prediction that Christie will become the presidential candidate for the Democrats.

As noted above by several, these things are not debates in any real sense.

My objection is the press, and while Fox may be less prone to ask an overload of “gotcha” questions, modern media feels they have to ask those obvious ones. As a result, it becomes as much an event for panelists and moderator as for candidates.

WHY? If these people put themselves forth for the top job, they should be far more knowledgeable of the important issues than even the best political reporters. We don’t need the distraction.

All we need is an impartial timekeeper to introduce the candidates, keep the time, and SHUT UP from then on.

Time is divided equally between all participants, who each have a microphone and a Jeopardy-style signal to buzz in. First speaker is by lot. Each may speak what he wishes, ask questions for others, do a little tap dance on their own time – but when their total time is up, they are cut off and off the stage. So save some time for a closing statement.

Even if two start off with a long argument, everyone will be equal by the end. If a guy is a jerk, goes off on tirades or changes the subject, the listeners can judge him on that.

Excellent move. He will be the nominee. Superior record, superior uphill battle victories, the only candidate to govern more conservatively than campaigned. Bland, not flashy communication skills – just right.

I don’t give a shit if the next president is deaf, dumb, blind, and can’t play pinball as long as he can get the necessary things done.

Take Jeb Bush for instance. The other day he questioned whether we need to spend $500 million on woman’s health (in the form of Planned Parenthood funding). Immediately he was slammed all over social media by the standard liberal trolls and by Hilary Clinton as well. The good candidate recognizes this as a great opportunity to engage the opposition, but Bush, annointed angel of the GOP establishment, decided on a different reaction – he apologized, explained he’d misspoken. He’s Romney 2.0, a milquetoast political coward with the spine of a snail.

They are always trying to extract the word apology out of people, and most of the time the people who are asked for it shouldn’t give them – usually this when someone gave a very telling criticism, or punctured a balloon, and it’s an indication that whatever was said needs to reiterated, although maybe in a less unartful way.

One of those “must reads”: