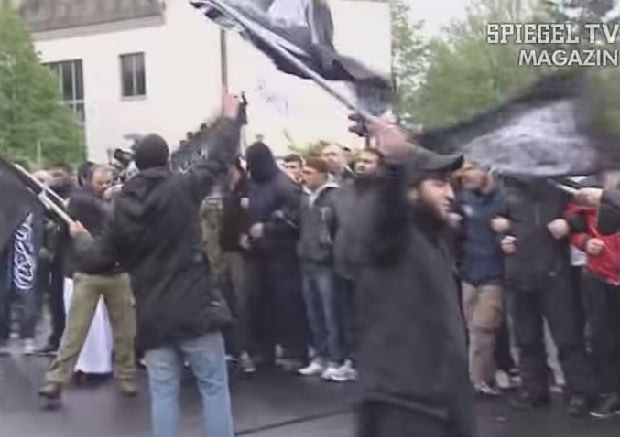 A high-profile trial is currently underway in Germany. 26 year-old Ebrahim H.B. and 27 year-old Ayoub B. are facing terrorism charges after returning back from Syria, having served as ISIS combatants. Just like in U.S., the German mainstream media too is clueless about the motivations of these two jihadists. Media can’t credibly talk about “resentment” and “alienation” in case of this relatively prosperous duo, it has to contend with “personal distress” and trauma as main reasons to explain the pathological behaviour of the alleged terrorists.

Ebrahim H.B., a German citizen of Tunisian-origin is charged with planning a suicide bombing in Baghdad. The media repeatedly emphasized the “quiet” and “shy” nature of the alleged ISIS-mastermind, who joined the Terrorist group just because his “planned wedding was called off”. The leading German newspaper Süddeutsche Zeitung reported [Author’s Translation]:

On Monday, Ebrahim H.B. told the Regional High Court in Celle that he had been very upset at that time. In spring of 2014 his fiancée called off their planned wedding. “I felt extremely humiliated by that.”

According to the same report, the second defendant Ayoub B. stuck to his original claims despite “repeated intensive questioning” in the courtroom, maintaining that he “only went to Syria for Koran-Studies” and help in “humanitarian” efforts.

In winter of 2013, weeks before heading to Syria, the duo attended a “charity-fundraising” organised by Germany’s high-profile Islamist preacher Pierre Vogel.

Pierre Vogel (37) is one of the most prominent Islamic preacher in Germany. The former professional boxer converted to Islam in 2001 and regularly appears on prime-time German talk shows. Vogel or Abu Hamza, as he is known in the Islamist circles, repeatedly denied any connection to ISIS in the past but has never openly condemned or distanced himself from the terror organisation.

He is not the only native German at the helm of the Islamist movement. Sven Lau, alias Abu Adam, runs a radical outfit operating in Rhineland region (NRW). In 2014, Lau briefly led the self-styled “Sharia Police” enforcing Sharia on the streets of Wuppertal — a gang disbanded after running into trouble with the law enforcement.

Rest assured, these two ISIS-returnees will take recourse of all the legal provision under the German law, while they and their comrades granted none to their victims. Around 500-600 Germans are still in Syria and Iraq fighting for ISIS. Once they return back, they too will use the very Western laws and provisions, they so despise. And return they would, even they themselves don’t want to live in the medieval hellhole they created with such religious fervor.

Once these fighters get battle-fatigued, they will rush back home, claiming their generous ‘infidel-funded’ welfare benefits. They know exactly well how stupid we are; Question is: Do we?

Tell me again why we should encourage immigration from Muslim countries?

Because they will register to vote as Democrats.

Europe in general has a deep, dark, serious problem, and it’s spelled M-u-s-l-i-m.

SOME fraction of Muslims are going to be Islamists. THAT is a simple tautology. How large a fraction of how large an non-assimilated population is the only question.

The great trick that all of Europe and Britain now face is figuring out the sheep from the goats. IF they can…

I think the Euros are going about this all wrong. They should be encouraging the muslims to leave for the IS.

Then lock the door behind them.

Bernie Sanders says if you don’t have borders you don’t have a country. The old fool said it as if, “wait, you people really want open borders?” Sorry Bern, I guess you haven’t been getting the Dem/commie newsletter on how to overthrow America.

The natives in Europe largely hate that their countries and heritages are being overrun with third world Africans, mostly Muslim. But as in the US, some elite globalist cabal has decided on this path to destroy liberty and western civilization.

The more I hear from Coulter’s audible book, the more clear it is how deliberate the “browning of America” really is. Bush did it, and Obama is ten times worse. Even as towns become 80% Hispanic mostly on welfare, they praise the cities for “diversity”.

Europe may be in worse shape since they are bringing in so many Muslims, and they are not well armed as the Charlie Hebdo slaughter demonstrated. And their welfare state seems even more generous than ours. Did Europe’s citizens ever get to vote on whether they wanted to become EurAfrica?

What they need is a fin… er… permanent solution to the muslim question.

rinardman: I agree. Encourage them to all leave for IS or any other group fighting the battle against [insert muslim complaint here]. But, if they do it in Germany, they will be tossed out on their ears.

France tried paying them to go home … guess they just come back, or others in their place. We could pay them $5000/family to go home, after biometrically identifying them all.