Rick Perry gets a PAC assist in Iowa

Rick Perry gets a PAC assist in Iowa 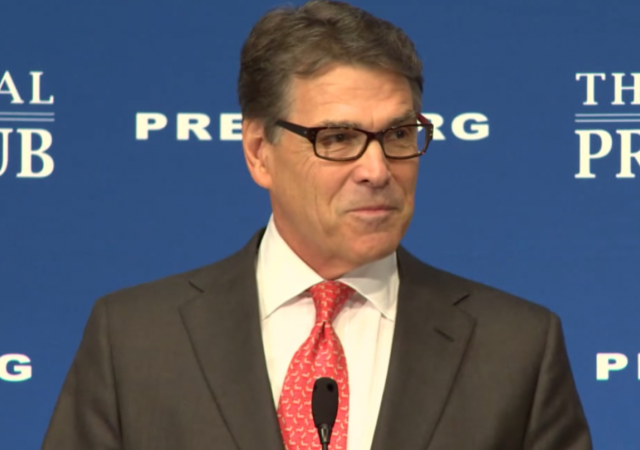 Though the media vultures circle, Governor Rick Perry’s campaign is not dead.

Saturday, Perry joined Fox News to discuss among other things, the state of his presidential campaign.

Shannon Bream asked, “Let’s talk about where you go from here. There’ve been chatter about staffers leaving, payroll not being met. Where do you stand right now, how do you plan to move forward in key places like Iowa, New Hampshire, and South Carolina?”

“Well I tell people I’ve been broke before, whether it’s in my personal life or whether it’s as the Governor of Texas. We had a $10 billion budget shortfall in 2003. You cut back, you make the reductions that you need to make and you move ahead and that’s what we’re doing,” said Perry.

After a decent fundraising month, Perry’s campaign began paying a handful of staffers again. Monday, USA Today reported there was only one paid Perry campaign staffer in Iowa:

“We are continuing our Iowa campaign, with several September dates planned and other dates under consideration,” said Perry’s Iowa strategist Bob Haus, who remains on board as an unpaid advisory role, as he did for the former Texas governor in the 2012 election cycle.

It was reported in mid-August that Perry, who lags at the bottom of polling in the GOP race in Iowa, was short on cash and was no longer paying campaign staffers. Predictions quickly cropped up that Perry may be the first of 17 Republican presidential candidates to exit the 2016 Iowa campaign.

Jamie Johnson, who was Perry’s senior director organizing conservatives in the early states, will now lead Perry’s efforts in Iowa.

…Haus said Perry’s Iowa team will have a smaller staff, and a more volunteer-driven effort, as will his team in South Carolina.

“If we can rehire staff after the 15th, our Iowa team will get first consideration. They are a talented team, and loyal,” Haus said. “There is a light at the end of the tunnel, we’ve seen it, and we’ll emerge.”

With only one paid staffer to man the whole of Iowa, speculation mounted (again) that end of Perry 2016 was nigh. As we reported when the news first broke that Perry was no longer paying campaign staff, PACs supporting his campaign had around $14 million to burn. One of those PACs is launching a field effort in Iowa, the Washington Examiner reported today:

Opportunity and Freedom PAC announced the hiring of two top field hands to run caucus organizing and voter turnout operations in support of Perry in Iowa, host of the first nominating contest of the 2016 GOP primary. Marshall Critchfield was tapped as the political action committee’s Iowa state director; Beth Hamilton as Iowa deputy state director. Additionally, Opportunity and Freedom PAC plans to be on television in Iowa’s three largest media markets by early next week with ads touting Perry’s candidacy.

“We are in this race for the long haul, and thanks to the support of our donors we have the resources to run a state of the art grassroots effort in Iowa, and that is what Marshall and Beth have been hired to do,” Jordan Russell, a spokesman for the super PAC, said in a statement.

…The super PAC’s deeper involvement on behalf of Perry also is something of a test case: third party groups usually stick to advertising, with the GOTV work left to the official campaigns.

Critchfield comes to the super PAC from the Jasper County Republican Party. He stepped down from his position as chairman of the county GOP to assume the field director role. Hamilton, Critchfield’s deputy, is based in Jackson, Miss., where the super PAC’s top operatives are headquartered. She recently managed a winning GOP primary campaign for Mississippi Insurance Commissioner Mike Chaney.

Opportunity and Freedom PAC says its Iowa field team will be fully operational on Tuesday. Meanwhile, it plans “targeted” statewide advertising in addition to the spots its purchasing in the three big Iowa media markets. The super Pac expressed confidence that Perry is primed for a comeback. Perry was languishing with 1.3 percent among GOP primary voters nationally according to the RealClearPolitics.com average.

“When the door opens for Gov. Perry this Fall/winter we will have put in place a foundation that will allow us to take full advantage of that opportunity,” said Austin Barbour, a top strategist for Opportunity and Freedom PAC.

There may be light at the end of the tunnel yet.

Friend of illegals, tilter at Trumpmills, running at 4% in Texas. Maybe Perry could take whatever he’s got left in his campaign kitty and put it to defraying the cost of his to illegals i.e., paying in-state tuition.

But wait. He’s trouncing Graham in Iowa, 1% to 0%!
http://www.realclearpolitics.com/epolls/latest_polls/

PACs are trying to bring Trump down in Iowa by boosting Carson and Perry.

It would be a shame to see one of the most successful conservative Governors of the last quarter century out of the race early because the media and the Ignorati prefer following the Kardashian campaign.

Indeed, a man who has DONE more to stem the tide of illegal immigration and criminal activity than T-rump has TALKED about doing. And would have done more if it was possible.

And a man who believes in and (generally) follows market economic ideas to VERY good effect, guiding the 12th largest economy in the world, and not just a paper empire of crony-capitalist establishment pandering and TMZ level “entertainment”.

Whatever else happens, Perry will have an important part to play in any reform movement led by a Conservative.

Not so much the BIG GOVERNMENT fraud who leads the pack currently, however.

…the media and the Ignorati prefer following the Kardashian campaign

That pretty much sums it up, sadly.

“Though the media vultures circle, Governor Rick Perry’s campaign is not dead.”

Yeah, it is. It just hasn’t been officially “pronounced” yet.

No, the glasses don’t make him look “more intelligent.” He’s a loser who wants to be nominated the GOPe presidential candidate. Heck, Dubya got there. Perry? Doesn’t stand a chance. But neither does Jeb!

Trump will bring the ratings to whatever he does. Including the GOPe convention!

Well, she is kinda right about the glasses.

First of all, let’s clarify the light at the end of the tunnel.

It’s a train. Not daylight.

A word of advice to the Trump bashers – he is singlehandedly in the process of destroying the elite GOP thugs AND the media thugs. The question is whether it is more important to end the reign of thugs like Rove and Priebus OR getting behind the most morally pure candidate.

We will probably never again have the opportunity to break the stranglehold of the elites.

Simply put, Governor Perry has DONE what others can only PROMISE.